Hurricane Sam remains a Category 4 storm. Get the forecast on where it will track next.

Scorching heat wave to intensify across southwestern US

Smoke towered over the 118 Freeway in Simi Valley, California, on July 7, as a wildfire raged along the road. No structures were threatened by the fire.

A brutal heat wave that has been baking the southwestern United States this week is forecast to ramp up in intensity in the coming days, causing many locations already sweltering to experience warmth well above normal, with temperature readings at 110 degrees Fahrenheit or higher.

The dangerous heat has caused excessive heat warnings to be issued across the Desert Southwest from southeastern Arizona and even into Central California. Areas under the warnings include cities such as Las Vegas, Indio, California, and Phoenix, Arizona. 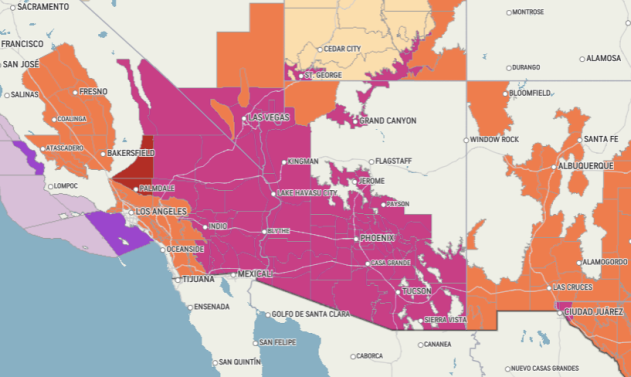 Ongoing and worsening drought over the southwestern United States will continue to contribute to well-above-average heat into early next week, while a big surge of heat is likely to make its presence known farther to the east around the middle of July.

"As a northward bulge in the jet stream with its associated area of high pressure at most levels of the atmosphere builds this weekend, temperatures are forecast to surge to new highs this summer over the interior Southwest and portions of the central and southern Plains," AccuWeather Senior Meteorologist Brett Anderson said. 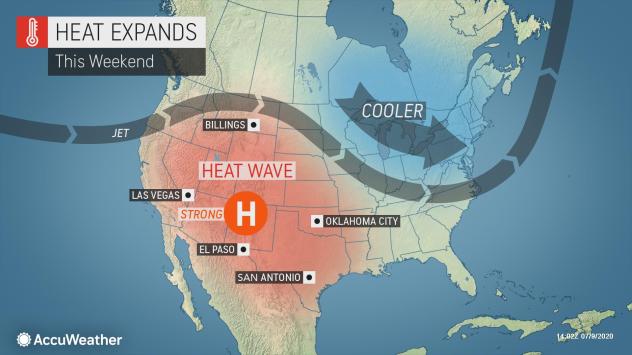 This setup allows a minimum of cloud cover and shower activity, and since the air aloft is also very warm, temperatures can climb to extreme levels in the summertime near the ground.

The ongoing and intensifying drought in the Southwest and parts of the Plains will play a major role as well. 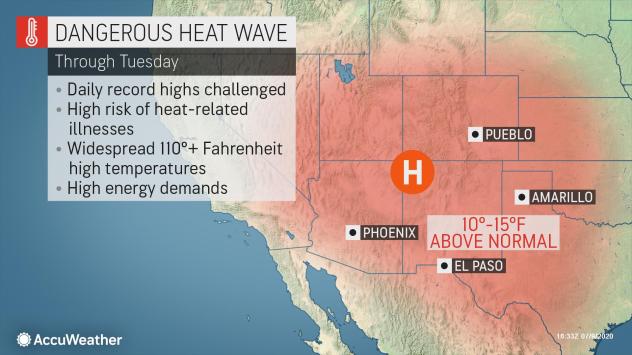 "The pre-existing dry soil allows most of the sun's energy to heat the ground and the air nearest the ground, rather than to evaporate moisture," according to AccuWeather Senior Meteorologist Dave Dombek. 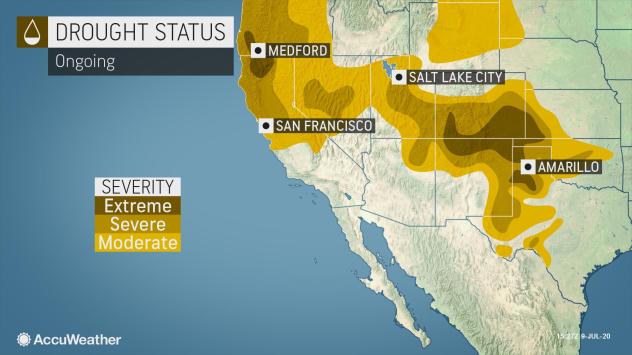 Since the heat is coming at the hottest part of the summer, on average, and that temperatures are forecast to be 10-15 degrees Fahrenheit above normal, to say that the heat will be extreme may be an understatement.

Heat wave boosts temperatures into triple digits across Southwest, central Plains
Heat exhaustion vs. heatstroke: What are the warning signs and how should you react?
Wildfires don’t care about the pandemic. Here’s how to prepare for an evacuation amid COVID-19

Daily record highs will be challenged, but temperatures could even come to within a few degrees of all-time record highs set as far back as the Dust Bowl era of the 1930s.

Highs are forecast to be around the 116-degree mark in Phoenix this weekend with highs of 107 expected in Dodge City, Kansas, and Amarillo, Texas. The all-time record highs are 121 in Phoenix, 109 in Dodge City and 111 in Amarillo. Phoenix reached their peak temperature on July 28, 1995, while the record in Dodge City occurred in multiple years, including 1934 and 1936. The high mark in Amarillo was set on June 26, 2011.

Phoenix is currently in the middle of a searing stretch of triple-digit heat. The city hasn't had a high temperature below 100 F since June 9. 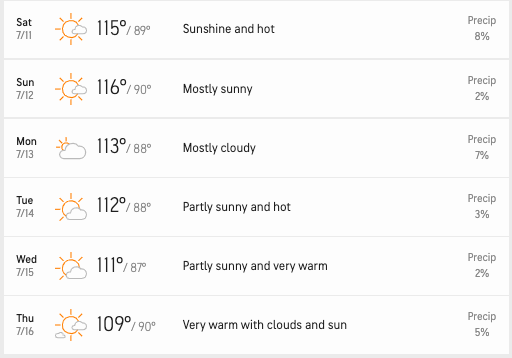 Starting Friday, temperatures in Death Valley, California, often the hottest daily location in the United States, are forecast to stay above 120 F into the middle of next week.

Conditions expected over the Southwest will be dangerous for strenuous outdoor activities. The dry air could cause heatstroke to sneak up on some people as perspiration will evaporate quickly unless people have a means to constantly remain hydrated or can stay inside an air-conditioned environment. 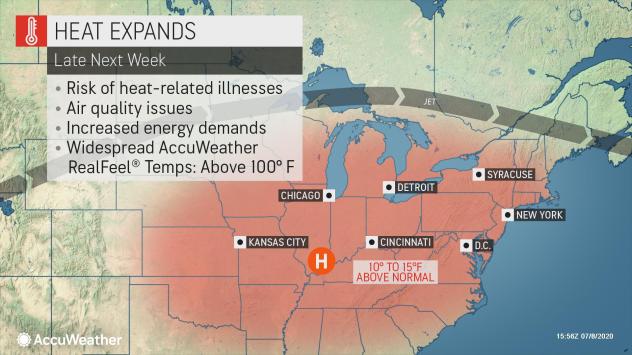 During the upcoming week, the areas of high pressure near the surface and the jet stream level are forecast to change their shape.

The high pressure areas will tend to become more elongated in a west-to-east fashion so that heat expands from the Southwest and southern Plains to more of the Midwest and even into Eastern states during the middle and latter parts of next week.

Higher humidity levels, soil moisture and scattered thunderstorm activity will prevent 110- to 120-degree temperatures in the Midwest and East, but it is possible that some locations approach the century mark. Widespread highs in the middle 90s are likely.

When combined with higher humidity levels, it could feel worse to some people when compared to that of the Southwest, especially in heavily urbanized areas where there is little breeze during the afternoon and early evening hours.

The expansion of the heat may put a strain on electricity demands with so many major population areas being hit.

Some breakdown of the extreme heat and dryness is anticipated for the Southwest later next week.

"As the core of the big high pressure area shifts just a bit eastward later next week, we should start to get a decent flow of moisture from Mexico that many attribute to the North American monsoon," AccuWeather Lead Long-Range Meteorologist Paul Pastelok said.

"The first big storms could be dust producers with gusty winds," Pastelok added.

As the storms blossom and become more widespread, it should knock down high temperatures in the Southwest, but at the price of higher humidity levels and sticky nights.

It is possible that as the monsoon ramps up around mid-July, Phoenix could have its first sub-100-degree day since June 9 when the high was 94.

Many locations will continue to rack up strings of 100-degree days until more widespread storms arrive on the scene.

But at least through the middle of next week over the Southwest, searing heat will continue and it may be several days later until some relief is felt over the adjacent central and southern High Plains, while the atmosphere heats up farther to the east.

Until drenching storms arrive in large numbers over the Southwest, the risk of wildfires will continue to remain high on a daily basis, even in situations where winds are light.