Record-breaking heat to spread eastward from Midwest to mid-Atlantic

Here are ways you can prep your home for summer!

Summer is just right around the corner and you might be asking yourself, how can I prepare for the sunny season?

Hot weather that was causing the mercury to rise over portions of the Midwest on Tuesday will pay a visit to the mid-Atlantic on Wednesday.

On Tuesday, Chicago set a record high of 94 F, besting the old record of 92 degrees set in 1895 and tied in 1944. While the city will have high temperatures in the middle 80s on Wednesday, that mark is still 8 degrees above normal for June 3.

Farther south, 90s will still be common on Wednesday in much of Kansas, and along Interstate 70 from Kansas City, Missouri, to St. Louis, Missouri.

After a below-normal beginning to the month of June in the mid-Atlantic, heat and humidity will build in earnest on Wednesday as the region will be on the edge of a building dome of heat. 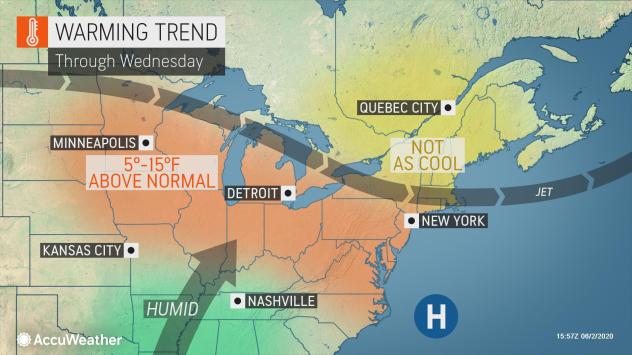 "It will be warmer and more humid in much of the Northeast on Wednesday," said AccuWeather Senior Meteorologist Michael LeSeney.

Portions of Virginia and the Carolinas endured similar temperatures on Wednesday. Richmond was another location that hit 90 for the first time on Wednesday. The normal first 90-degree reading in Richmond is May 13. This was also Richmond's latest first 90 since 2016, when it occurred on June 11, just like in Washington, D.C.

Even Raleigh has failed to hit 90 prior to Wednesday. The city has reached 89 degrees twice, on March 28 and on May 16. The city hit the 90-degree mark during the afternoon. Normally, the first instance of a 90-degree temperature occurs on May 15 in any given year.

All three aforementioned cities will reach 90 degrees or higher again on Thursday, just ahead of a cold front, which will mean a risk of showers and thunderstorms.

Humidity will likely be highest on Friday, but temperatures are expected to fall just short of 90 degrees as the cold front moves southward.

Anyone outdoors will need to make sure to stay properly hydrated and protect themselves from the sun with hats, sunglasses and sunblock. In addition, it is important to remember to never leave children or pets in a car for any length of time. Having the windows open in these temperatures does not keep it cool.

Interestingly, cities much farther north have already experienced 90-degree temperatures, which occurred last week. Caribou, Maine, Saranac Lake, N.Y., and Burlington, Vt. are just a few. Caribou, Maine, and Saranac Lake, NewYork, then had frost on Monday and Tuesday mornings of this week! There will not a be a frost threat for the foreseeable future up there. However, there will also not be a return to excessive heat in those locations. The warmest day will likely be on Friday, when temperatures from the mid-70s to lower 80s are forecast.

By Sunday, the entire region should have temperatures right around normal for early June as high pressure builds in Canada.