AccuWeather forecasters warn of not one, but two shots of winter weather that will take aim at the Northeast starting Easter weekend and continue throughout next week.

Winter is clinging on for dear life as calendars mark just over a month since the first day of spring. An impactful nor'easter is headed to the northeastern United States this week, according to AccuWeather meteorologists.

This change comes shortly after temperatures hit a balmy 79 degrees Fahrenheit in places like New York City, and 84 F in Washington, D.C., last Thursday. Many of those in the interior Northeast sat comfortably in the 60s and even the 70s. Temperatures were not as extreme last Friday but were still above normal for most.

Chilly air swept through the region over the weekend, erasing all the warmth. Throughout the Easter holiday, snow showers and flurries sprinkled portions of Pennsylvania and New York on northward into Maine. Along with the cooler air came a couple reports of quarter-sized hail in southern New Jersey and Delaware.

The big-ticket item to watch for, however, will be the nor'easter on its way early week.

"Nor’easters can mean heavy snow for the I-95 corridor in winter; but, now that we are well into April, most areas near the coast from southern New England to the mid-Atlantic are in line to see just rain between Monday and Tuesday," said AccuWeather Meteorologist Matt Benz.

Rain and thunderstorms are forecast to begin across much of the mid-Atlantic on Monday, with some particularly heavy thunderstorms along the Carolina Coast as the nor'easter begins to form. 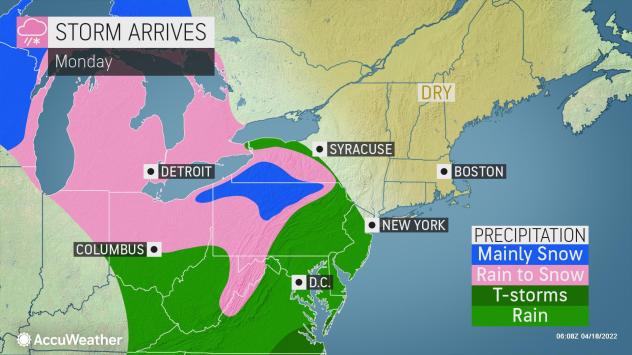 "Low pressure will develop quickly off the Carolina Coast Monday before becoming a full-fledged nor’easter into Monday night and Tuesday as it tracks to the Northeast," explained Benz.

Rain should hold off until the afternoon on Monday for many of the I-95 cities like the Big Apple and Philadelphia. Once again, D.C. is expected to be stuck in the upper 40s on Monday afternoon, nearly 20 degrees below average.

Heavy rainfall is forecast from Richmond, Virginia, and Philadelphia to New York and Boston and feature strong coastal winds. Nor'easters are named for their powerful northeasterly winds that occur in situations like these and can cause coastal flooding. This could be the case along the Northeast Coast, especially at times of high tide.

With the track of the storm pushing farther inland across the Northeast, however, snowflakes and accumulations are forecast to stay inland. 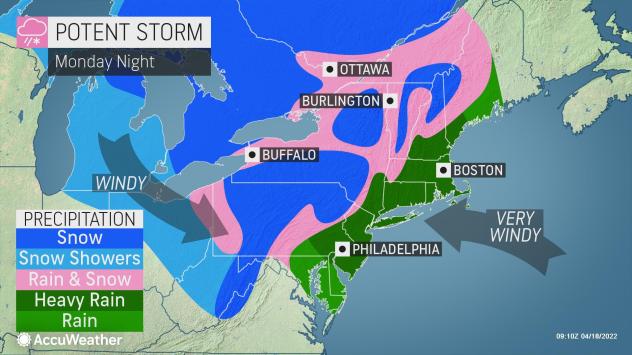 Temperatures are set to drop Monday night into the 20s and 30s across the Northeast. Snow can mix in with the rain along the interior, while much of Pennsylvania and New York could see mainly snow. Accumulation is likely to pile up mainly on grassy surfaces, with the highest snowfall totals staying in the mountainous terrain.

A swath of 1-3 inches of snow may extend from the higher terrain of southwestern Pennsylvania up into northern New England and Canada, while as much as half a foot of snow is forecast in portions of Vermont and New York. The most widespread snowfall accumulation is forecast across Quebec in Canada.

It is not out of the question that some places across the interior Northeast could wake up Tuesday morning to a light or slushy coating of snow on any untreated roads and sidewalks. Travelers heading out Tuesday morning should be cautious. 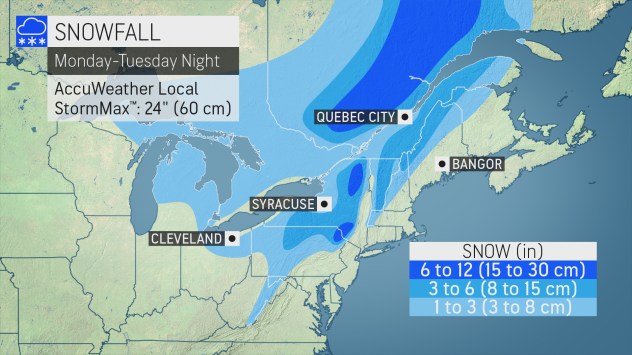 Temperatures are forecast to rise throughout the day on Tuesday, allowing for temperatures to pull away from the freezing mark. Even still, snowflakes could be flying from Michigan and West Virginia up to northern New England. Gusty winds are also expected to continue, topping out near 35 mph, which could further cause travel delays. 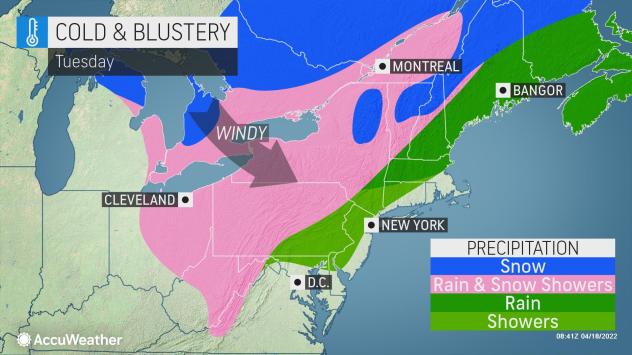 While many may think of snow as out of reach in April, meteorologists say this isn't necessarily the case. Snowflakes are typically seen across the Appalachians in most Aprils, and there usually tends to be at least a small accumulation of snow every two to three years in the central and southern portions of the mountain chain, according to AccuWeather Senior Meteorologist Dave Dombek.

For the second half of the week, a stretch of cool and calm weather is on the way for the East. By next weekend, however, there can be moderation in temperatures or even a warmup as high pressure takes hold.