From the southern Plains to the interior Northeast, a heat wave will produce temperatures that are 15-35 degrees Fahrenheit above average this week.

April and the first few days of May brought a seemingly endless barrage of storms and waves of cold air that had many residents of the central and eastern United States wondering when Old Man Winter would finally depart. According to AccuWeather meteorologists, a change in the weather pattern has finally arrived, but it will feel more like summer than spring.

Scorching heat that has already been in place for several days in Texas is coming to the Midwest and northern tier of the northeastern United States and part of southeastern Canada this week. Highs near 100 in the South Central states, the 90s in parts of the Midwest and the 80s in portions of the Northeast will challenge record highs set as far back as the late 1800s in some cases.

Temperatures soared well past 100 degrees in central and northwestern Texas this past weekend, bringing a dose of triple-digit heat that is more typical of late July for those parts of the Lone Star State. 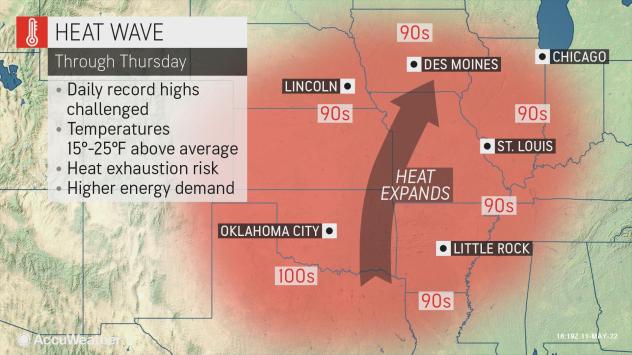 Del Rio, San Angelo and Abilene, Texas, all set record highs and peaked at 107 on Saturday. Amarillo, Texas, hit 101 on Saturday, good enough for the city to record its earliest 100 F or greater temperature of the season and to beat the old record by about a week, according to the National Weather Service. The prior record for the earliest date of 100 degrees or higher was May 15, 1996, when the temperature hit 101.

The May heat wave is being caused by a traffic jam taking place in the atmosphere, forecasters say.

"A massive northward buckle in the jet stream has developed in response to stalled storm off the East Coast," AccuWeather Senior Meteorologist Brett Anderson said.

"As the jet stream buckle builds, heat will expand northeastward through the Mississippi Valley to parts of the Great Lakes region by midweek and then on to the St. Lawrence Valley in the Northeast later in the week," Anderson explained.

Record high temperatures will be challenged across a 2,000-mile-long stretch of the U.S. this week. The heat will sizzle in major Texas cities such as Dallas and Houston, while the midwestern hubs of Chicago and St. Louis will also roast. The unseasonable warmth will make its way to New England and as far north as Caribou, Maine, as the week progresses.

Even the major Canadian metropolitan areas of Ottawa, Montreal and Quebec City will experience record-challenging heat this week. 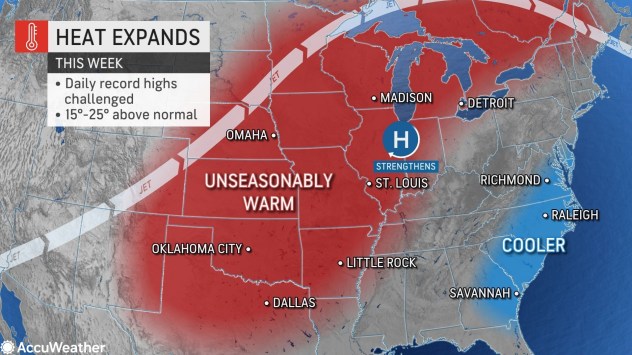 High temperatures in the 90s are anticipated as far north as South Dakota, Iowa and Wisconsin.

The heat wave will produce temperatures that are 15-25 degrees above average. In most cases, temperatures this high have not been experienced since September or August last year.

Many records dating back into the 20th century will be rivaled. In some cases, high-temperature marks not seen since the 1800s on certain dates could be topped.

By late Wednesday afternoon, temperatures at Indianapolis could come to within a few degrees of the record of 89 set in 1896. On Thursday, in parts of the Chicago metro area, warmth could produce temperatures not recorded on the date since the 1950s. The record at O'Hare International Airport of 92 was set back in 1956. 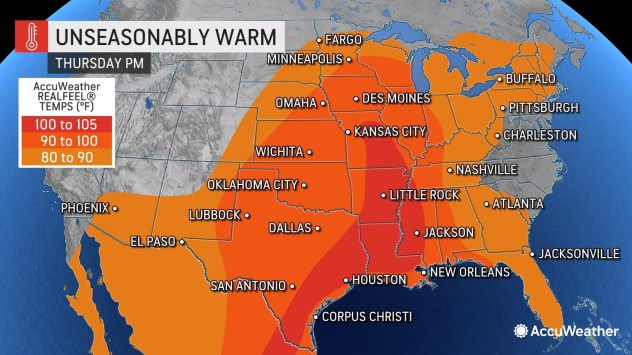 "In the Central states, it is not only the heat that is surging but also the humidity," AccuWeather Head of Forecasting Operations Dan DePodwin said.

Humidity levels are reaching levels more typical of July as far north as the northern Plains this week. When combined with sunshine as intense as early August and light winds will push AccuWeather RealFeel® Temperatures from a few to 10 degrees higher than the actual temperature. AccuWeather RealFeel® Temperatures could exceed 100 as far north as places like Columbia, Missouri.

"Not only will high humidity result in increased discomfort during the day, but unusually warm nights that are also more typical for July," DePodwin said. In Kansas City, Missouri, for example, the low temperature was 75 degrees Wednesday morning, compared to a normal low of 72 in mid-July.

On the rim of the heat, rounds of thunderstorms will erupt and can become severe at times over portions of the Dakotas, Minnesota and northern Wisconsin this week. It is not uncommon for severe weather in this zone on occasion during this part of the spring, but frequent rounds of severe weather this far north are more typical for the early to the middle part of the summer. 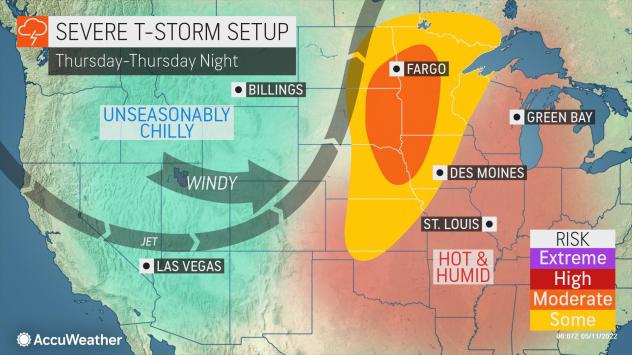 Near the end of the week and over the upcoming weekend, the large jet stream buckle will gradually break down, forecasters say.

A front that has been pent up from the Rockies to the northern Plains will push farther to the east over the Central states. This will allow moisture to stream northward from the Gulf of Mexico, limit how high temperatures can rise and generate an increase in shower and thunderstorm activity. At the same time, the storm over the Atlantic will drift westward and send clouds, showers and lower temperatures inland over the Eastern states. 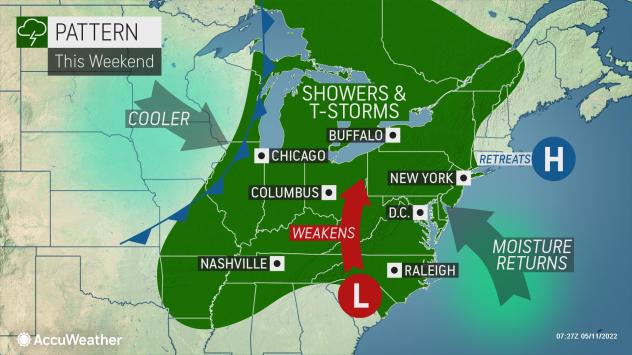 The same offshore storm dropped inches of rain during Mother's Day weekend and wet soil conditions will hold temperatures back from parts of Ohio to the mid-Atlantic coast. The storm itself will also continue to exert some influence by way of a cool breeze from the ocean in the mid-Atlantic so that the zone from Washington, D.C., to Philadelphia, New York City and Boston as well as areas from Delaware to much of Florida will dodge this week's heat wave.

Despite the inevitable end to the summerlike warmth, a widespread transition back to unseasonably chilly conditions is not foreseen for the balance of May at this time, forecasters say.

Texas tornadoes reveal the highs and lows of storm chasing