Above-average temperatures have been the norm across Spain through the first half of June, and Mother Nature has been turning up the heat another notch across Western Europe ahead of the official start of summer on June 21.

Residents and visitors have been using every means possible to stay cool amid the early-season sweltering temperatures that Spain's meteorological agency (AEMET) has described as the earliest such heat wave since 1981. AEMET has issued weather warnings across the country throughout the week, highlighting the severity of the high temperatures.

On the streets of downtown Madrid, where temperatures have been in the lower 100s F (38-40 C) every day this week, vendors sold hats and bottles of water to help people beat the heat. Other pedestrians used umbrellas to shield themselves from the sun's intense rays.

"To put the intensity of the heat into perspective, the highest recorded temperature at the Madrid Airport during the month of June is 106 F (41.2 C), and the city climbed within a few degrees of that value on Wednesday," said Alyssa Smithmyer, a meteorologist at AccuWeather who regularly monitors conditions in Europe and fine-tunes forecasts across the continent.

The Madrid Airport set the previous maximum June temperature record on June 28, 2019, during a heatwave that brought four consecutive days of temperatures ranging between 102-106 F.

By the weekend, Madrid may have tallied as many as five consecutive days of triple-digit heat, according to AccuWeather's forecast.

Temperatures observed this week are roughly 15 to 25 degrees F (8-14 degrees C) above normal for this time in June.

"Typically, daytime temperatures over 100 F (38 C) do not occur in Madrid until the last week of June or July," Smithmyer noted.

The sizzling conditions can be attributed to a northward bulge in the jet stream across the Iberian Peninsula that is pulling in hot air from northern Africa. These southerly winds can also pull Saharan dust northward, leading to hazy skies and reduced air quality -- something this part of the world experienced several times earlier this year.

In the eastern coastal city of Valencia, Spain, high temperatures are forecast to top out in the middle to upper 90s F (34-37 C) by the end of the week. 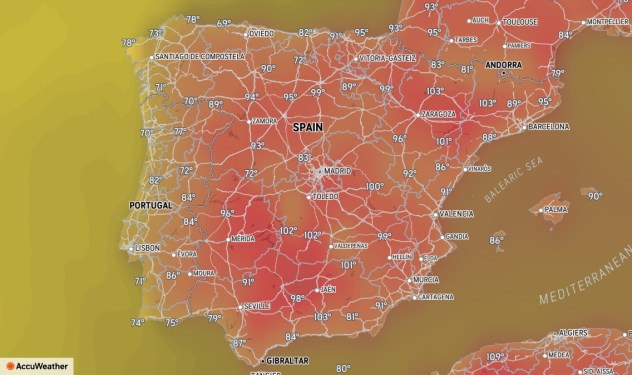 The Iberian Peninsula will not be the only place in Western Europe feeling the intense heat, AccuWeather meteorologists say.

"Temperatures are expected to climb across southern and central France through Sunday," Smithmyer said.

The heat is expected to peak at the beginning of the weekend in Paris, where the high is expected to reach 100 F (38 C) on Saturday, which would meet the city's record high temperature for June. The hottest it's gotten in the city so far this year is 86 F (30 C).

Experts urge people throughout the affected areas of Western Europe to take necessary precautions during the extended heat wave to lessen the risk of heat-related illnesses. Also, high-energy appliances should be used in the early morning and evening hours to lessen the strain on the power grid amid a time when cooling demands will be pushed to the limits.

The uncomfortably hot weather pattern is also expected to create an extreme fire risk across much of the Iberian Peninsula and into southern France through the end of the week. Portions of Spain have already been ravaged by forest fires in recent days.

Fortunately, forecasters do see an end in sight to the excessive heat.

"By Monday, most residents across Western Europe will begin to feel some relief from the heat as daytime temperatures gradually drop closer to normal," Smithmyer said.

However, as the temperatures sink closer to average on across France on Sunday, the risk for severe thunderstorms will become elevated across parts of western and northern France as well as northern Germany.