Longest heat wave of the summer building in Northeast, Midwest

The most popular meteor shower of the year, the Perseids, will peak on the night of Aug. 11-12. Get ready for a star-filled summer night with meteors streaking across the sky.

In a summer where stretches of 90-degree Fahrenheit temperatures have been frequently broken up by rounds of unseasonably cool conditions, AccuWeather meteorologists say a building hot and humid pattern for much of the northeastern and midwestern United States could bring the longest heat wave of the summer to a number of locations. Humidity levels and blazing sunshine will make AccuWeather RealFeel® Temperatures soar into dangerous territory.

Even though average temperatures slowly trend downward during the month of August as the nights grow longer and the sun angle declines, there can still be stretches of hot and humid weather. The forecast calls for a lengthy stretch of above-average warmth, with official criteria for a heat wave likely for many areas. When temperatures hit 90 or higher for three days in a row or more in the Midwest and Northeast, an official heat wave can be called. 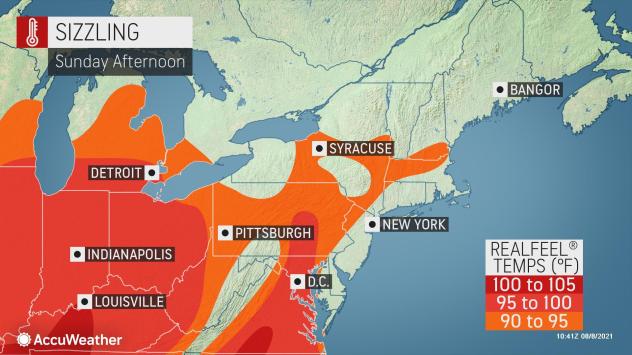 For people in the Midwest and Northeast who haven't had their fill of 90-degree weather or simply felt that hot and humid conditions were lacking in their area, there is some good news. 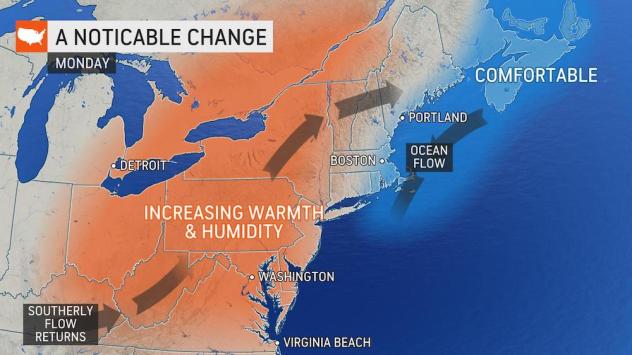 "Hot and humid conditions are in store for a broad swath of the North Central and Northeastern states through much of this week, all thanks to the jet stream retreating to near the Canada border," AccuWeather Senior Meteorologist Brett Anderson said.

Generally, areas south of the jet stream tend to get quite warm. 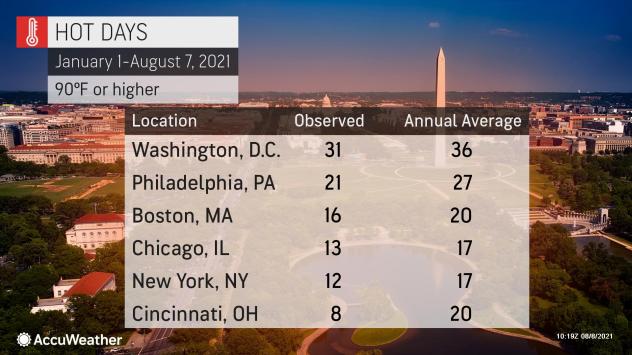 "The pattern into this week will feature widespread highs in the upper 80s to lower 90s with a few instances where temperatures can peak in the mid-90s," Anderson said.

"That being said, this is unlikely to be a record-breaking heat wave, other than the potential for a stray daily record being challenged or topped here and there, where the ground has a chance to dry out," Anderson added.

With the potential for heat to last three to seven days in most cases, some locations are likely not only to add a heat wave to their tally for the season but also to extend their longest stretch of 90-degree days.

The number of days with 90-degree highs has been keeping pace with average across much of the Midwest and Northeast, but there have been some places where highs in the 90s have been in short supply. Pittsburgh did not record a 90-degree temperature throughout the month of July and, as of Aug.8, has not reached 90 since June 29. The Steel City has yet to record an official heat wave this season. 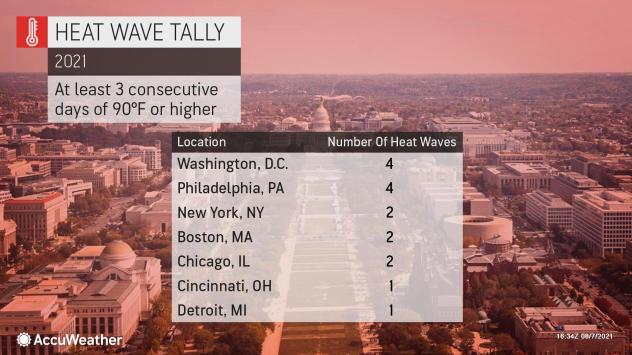 Cincinnati has had only eight 90-degree days so far this summer, or less than half its average of 20. Additionally, the Queen City has had only one heat wave that lasted the bare minimum of three days this summer during July 12-14.

Detroit is another city that has experienced only one heat wave so far this summer, while Chicago and New York City have had only two such stretches. The heat waves lasted only three days each in Detroit and Chicago, while New York City's longest heat wave lasted four days spanning June 6-9.

Since there will be a general uptick in humidity levels, thanks to a light flow of air from the Gulf of Mexico and occasionally from the Atlantic Ocean, AccuWeather RealFeel® Temperatures will run about 10 degrees higher than actual temperatures, especially during the midday and afternoon hours, where the sun will be out in force. 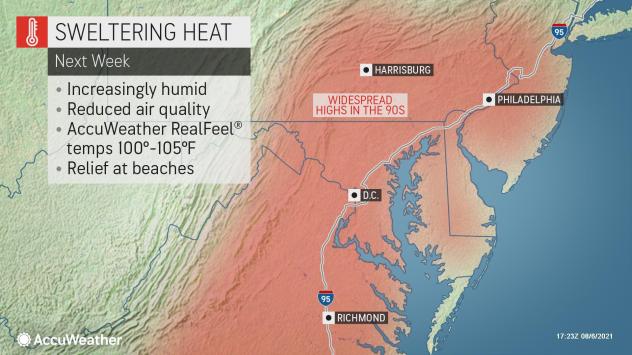 AccuWeather RealFeel® Temperatures will soar into the upper 90s in New York City and Detroit to the low 100s at times in Philadelphia and Washington, D.C., which will be an increase of 10 to 15 degrees from last week.

It was even cooler across New England earlier last week amid the less humid weather pattern. In Portland, Maine, where AccuWeather RealFeel® Temperatures topped out between 70 and 85 during the afternoons from last Tuesday to Thursday, values will climb into the low 90s by late this week. Boston, Massachusetts, will have an uptick in AccuWeather RealFeel® Temperatures from 72 to 80 last week to the lower to mid-90s late this week.

This level of heat can be dangerous and lead to incidents of heatstroke and heat exhaustion without the proper precautions. People will need to stay hydrated and take breaks from the heat in an air-conditioned environment where and when possible. During spells of hot and humid weather such as this, AccuWeather forecasters urge people to avoid prolonged, strenuous activity from the late morning to the late afternoon hours.

A small storm system that was bringing some rain and thunder to the Interstate 95 corridor, including the mid-Atlantic beaches, on Saturday will reach the southeastern New England beaches on Sunday.

The pattern through much of this week, however, will generally make for some great beach or pool weather, Anderson said.

"Surf temperatures along the mid-Atlantic and New England coasts are running about 2-3 degrees above normal for early August," Anderson said.

Water temperatures ranged from the mid-60s on the beaches in southern Maine to the upper 70s to near 80 on the Virginia beaches on Friday, and temperatures are still trending upward.

"Since there will be very light winds overall, local sea breezes should cool things down a bit each afternoon at the beaches with the strongest sea breezes likely along south-facing beaches," Anderson said. 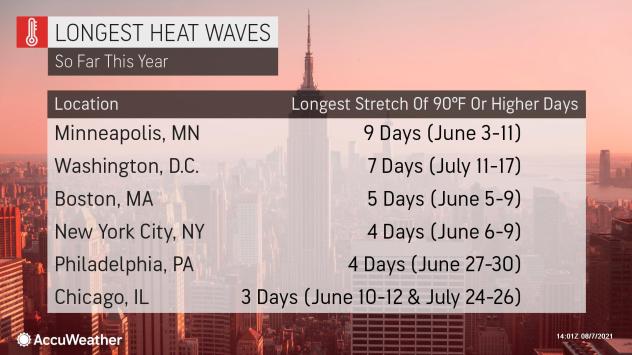 And for those hoping the hot and humid weather won't last through Labor Day, there is also some good news. Beginning late this week in the Midwest and next weekend in the Northeast, another sizable southward dip in the jet stream is possible that would tend to bring in much cooler and less humid air, perhaps preceded by a round of widespread showers and thunderstorms.

Until then, most thunderstorm activity will tend to be spotty and brief with some exceptions in the Midwest and interior Northeast. In these areas, smaller ripples in the jet stream are forecast to produce rounds of thunderstorms, some of which can become severe this weekend.

Hurricane Will the Atlantic basin soon awaken from its slumber?

Conditions worsening across the coast of the Carolinas