Multiple homes were destroyed after the Lake Fire sparked up and rapidly grew to more than 10,000 acres in just a few hours in Lake Hughes, California, on Aug. 12.

A dangerous, long-lasting heat wave is underway over the western United States with temperatures expected to soar as much as 30 degrees Fahrenheit above normal from Arizona through Washington.

This summer has already gone down as the hottest on record in Phoenix with the city setting a new record for the most days with a temperature at or above 110 F. On Friday, temperatures reached 117, which tied with the city's record for hottest August temperature that was set in 2015. As of Friday afternoon, the city also broke the record for most days with a temperature at or above 115, beating the old record of 7 consecutive days. This upcoming pattern will continue to add to the impressive records in the Valley of the Sun and other cities across the region. 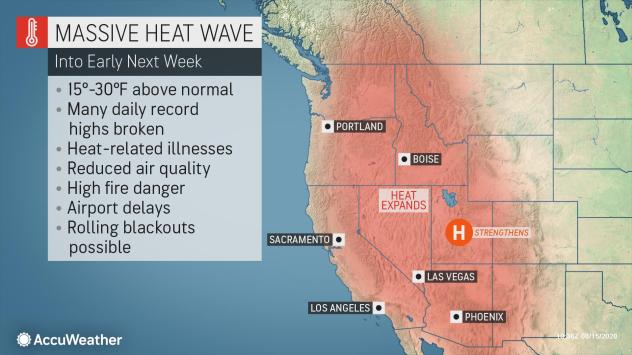 “Rainfall is running quite a bit below average across the Southwest, and temperatures remain well above average as a result of less rain and lower humidity levels,” AccuWeather Senior Meteorologist Brian Thompson said.

This pattern that has dominated the interior Southwest this summer will expand over the weekend due to a northward shift in the jet stream, resulting in a widespread heat wave across the western U.S.

On Friday evening, the California Independent System Operator (ISO) declared a statewide Stage 2 emergency due to the excessive heat driving up energy use. The ISO later declared a Stage 3 emergency and started initiating rotating power outages.

Pacific Gas and Electric initiated what may only be the first wave of rolling outages across El Dorado, Marin, Napa, San Mateo and Sonoma Counties. At the peak of the outages Friday evening, more than 330,000 customers were left in the dark. Power has since been restored across the affected counties, but the company warns that there may be more in the coming days. 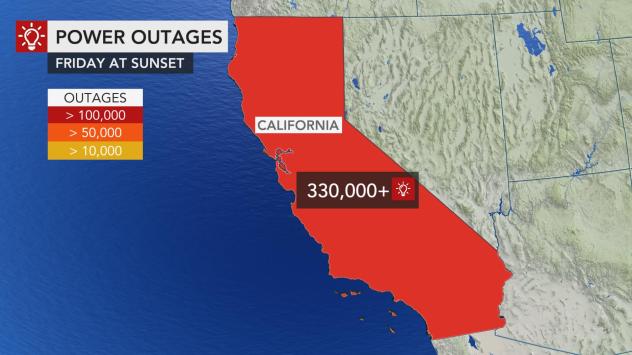 “By this weekend, the [heat] will continue to expand westward and northward, bringing record-challenging heat to Las Vegas, Los Angeles and across the San Joaquin Valley in California,” said AccuWeather Lead Long-Range Forecaster Paul Pastelok. 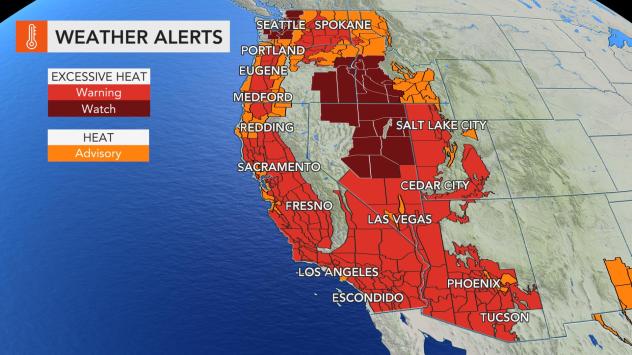 This translates to temperatures in the triple digits in places such as Sacramento, California, Salt Lake City and possibly even Portland, Oregon.

The heat could be so intense that it may affect the ability for planes to take off, AccuWeather Senior Meteorologist Alex Sosnowski said. Some airlines may impose weight and baggage restrictions to help combat this issue. He urged travelers to prepare for delays for any flight departing a city that is being affected by the heat wave.

This weekend could feature the hottest weather in three years for several cities in California. Sacramento may reach 107 F for the first time since Sept. 2, 2017, and Fresno is forecast to hit the 110-degree mark for the first time since June 20, 2017. Cooling centers have been opened in Sacramento to help residents stay cool amid the record heat. 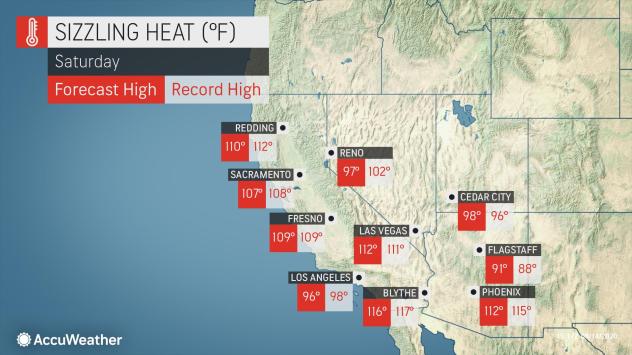 Even Death Valley will be abnormally hot. The thermometer in the hottest place in North America is likely to remain at or above 100 F for more than 72-consecutive hours with afternoon highs coming within a degree or two of record levels. 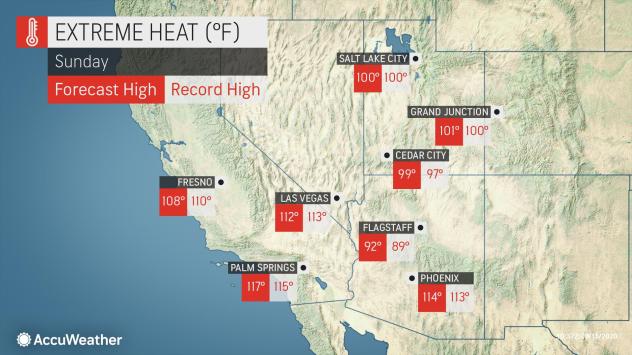 Visitors in national and state parks across the region should use caution and avoid long hikes during the afternoon hours. Hikers in Zion National Park often flock to the Virgin River to take a walk in the water to help cool off when temperatures reach triple digits, but park officials are telling people to avoid the river, including in the popular Zion Narrows, after a toxic bacteria was found in the water.

Sunday could be the peak of the heat wave across the Pacific Northwest with many major inland cities approaching or eclipsing the 100-degree mark. Even Seattle could make a run at the daily record of 98 F on Sunday afternoon. 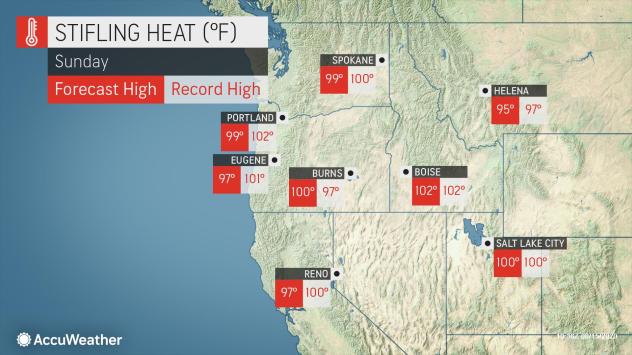 Across the border, Vancouver, British Columbia, may experience the hottest August day on record, according to Sosnowski. Currently, AccuWeather is predicting a high of 90 F in the city, which is just a few ticks below the all-time August high temperature of 92 F set on Aug. 9, 1960. If the breeze blows offshore on Sunday, the airport, where records are kept could be almost as hot as the city.

The massive heat wave will continue to hold strong right through the first half of next week with daily temperatures averaging 15 to 30 degrees above normal for many areas.

California homes evacuated as fire grows to 10,000 acres
Wildfires don’t care about the pandemic. Here’s how to prepare for an evacuation amid COVID-19
July brought the heat, broke records across the US

Anyone across the region who needs to be outside should plan to do so early in the day before temperatures swell. 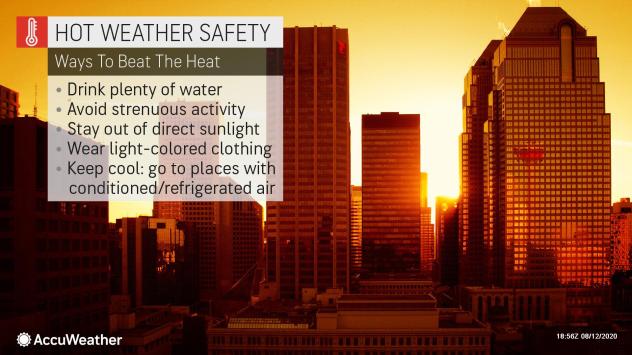 The poor air quality associated with heat waves could be compounded in some areas by wildfire smoke over part of the region.

Dozens of wildfires are burning across the western U.S., spewing smoke into the atmosphere that in some cases is carried hundreds of miles away from the fires themselves. This is just the start of what is forecast to be an active start to the wildfire season across the West. 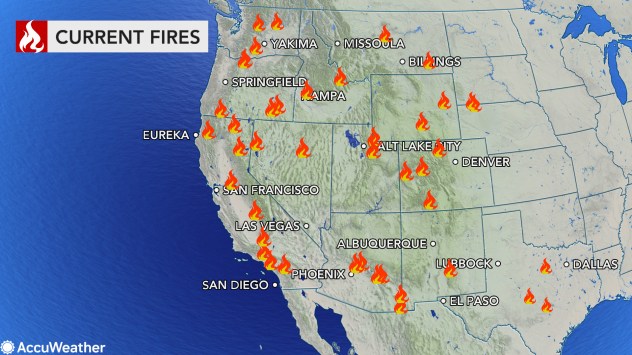 The Pine Gulch Fire burning in western Colorado is one of the larger fires that is sending smoke high over the atmosphere over Colorado, Kansas, Nebraska and Iowa. The fire is large enough that it created its own clouds, known as pyrocumulus. 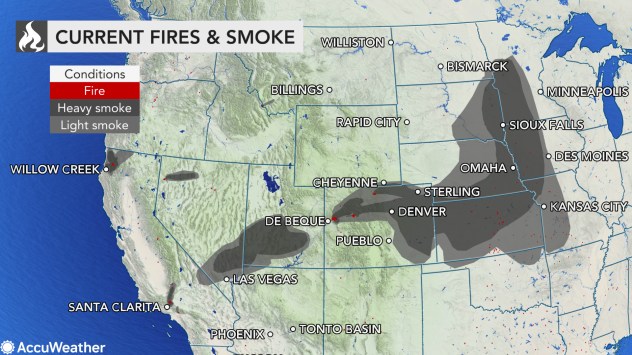 The baking heat may also lead to worsening drought conditions across the West.

“We've talked at length before about how the building drought has been concerning in Oregon and Northern California, but drought conditions have really been expanding across the Four Corners recently because of the slow monsoon season,” Thompson said.

“The lack of a monsoon is adding to what is becoming a more widespread drought situation across the West,” he added. “Places like Las Vegas and Palm Springs, California, have yet to record measurable rainfall this monsoon season,” he added.

Time is running out for the monsoon to bring meaningful rainfall to the region as the monsoon season typically ends in late September. Even if rain and thunderstorms do return, it will likely not be enough to offset the extremely dry summer.