Showers and thunderstorms could put a damper on holiday weekend activities in parts of the East.

Temperatures have surged late this week, and typical summer heat will be a common occurrence in much of the northeastern part of the United States, except for across one region: New England. However, in some areas of the mid-Atlantic, temperatures will be high enough to approach long-standing records.

A small northward bulge in the jet stream allowed temperatures to spike from the Upper Midwest to the central Appalachians and the Delaware and Chesapeake bay regions Friday, following building warmth on Thursday.

In what is typically a hot time of the year, "temperatures have climbed to between 5 and 10 degrees above average on Friday," AccuWeather Meteorologist Nicole LoBiondo said.

Normal high temperatures range from the lower to middle 80s F over the central Great Lakes to the upper 80s to near 90 in around the Delaware and Chesapeake bays in early July.

The surge of heat has pushed temperatures generally into the 90s over this swath, with a few places such as Washington, D.C. approaching the 100-degree mark on Friday. The high temperature record for the date in the nation's capital is 101 set in 1966, so that still stands. The record high of 104 set in 1898 in Baltimore also remained in tact.

"New York City will be on the 90-degree heat threshold on Friday," LoBiondo said. After an official high temperature of 90 degrees on Friday, New York City has climbed to 90 F four times this year. Two of the 90-degree days were in June and the third occurred on Thursday, July 2. In fact, the reading of 92 degrees on Thursday was the highest temperature so far this year.

Burlington, Vermont, has had seven 90-degree days in June with six in a row during the mid-June heat wave. Temperatures peaked at 96 on June 22 and 23, both of which set daily record highs.

However, many areas in New England will miss out on the big heat surge to end this week due to a southward dip in the jet stream initially.

During the Independence Day weekend, New England will remain in the temperate zone and areas from the eastern Great Lakes to part of the mid-Atlantic coast are likely to throttle back a few degrees. 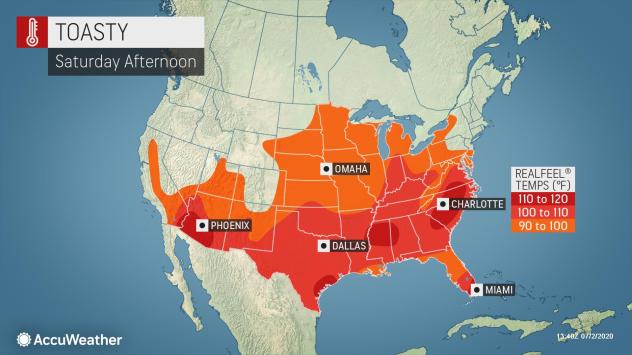 There will still be some risk of isolated, pop-up storms during both days of the holiday weekend, any storm will tend to be brief and generally limited to the late afternoon and early evening hours.

A top lightning expert in the U.S., John Jensenius, told AccuWeather's Monica Danielle that at the first rumble of thunder, people should be sure to move indoors or into a hard-top, fully-enclosed vehicle to reduce the risk of being struck by lightning. 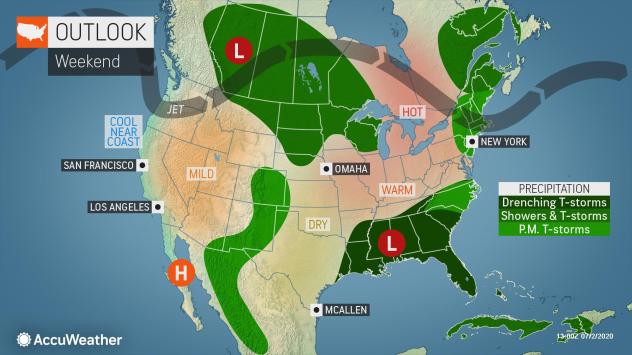 Next week, heat will again build over the region and may even surge across western and central portions of New England.

There is some indication of a large northward bulge in the jet stream to develop over the central or western U.S. during next week, which may set the stage for the hot weather pattern to brew.

"If this develops more toward the Central states, then widespread, long-lasting heat may also extend into the Midwest and Northeast," according to AccuWeather Senior Meteorologist Randy Adkins.

Hot in the Windy City. June ends on blistering note for Chicago residents
Daily coronavirus briefing: US reports record 52,000 new cases in 24 hours
How is the weather shaping up for Independence Day fireworks displays?

"If the center of the jet stream bulge sets up over the Rockies and Great Basin instead, then episodes of heat would be abbreviated and interrupted by pushes of cooler air from Canada from the Midwest to the Atlantic seaboard," Adkins added.

The lack of long-lasting heat thus far this year could create an extra risk for people partaking in manual labor and vigorous exercise. People are reminded to avoid strenuous activity from the late morning through the afternoon hours, when the sun is high in the sky and temperature and AccuWeather RealFeel® temperatures reach peak levels.

The necessary use of masks in close proximity to others to limit exposure and spread of the coronavirus could create an extra strain on the body under strenuous conditions in the heat. Here are some practical tips for trying to to stay cool while wearing a mask this summer.

For those that must work in the searing conditions or feel compelled to exercise, be sure to take breaks out of the sun and keep hydrated with non-alcoholic and non-caffeinated fluids. Seek cool environments in air conditioning to help the body recover.

For those seeking relief at the beach into this weekend, where beaches are open, ocean water temperatures will generally range from near 60 in southern Maine to near 70 along the New Jersey coast to near 80 around the Virginia capes. Water temperatures from the upper mid-Atlantic coast are in the range where there is a significant risk of cold water shock.