One of the strongest storms to ever hit the state of Alaska is unleashing a massive storm surge on the western coast of the state, causing structural damage to several communities.

Typhoon Merbok, which formed over the northwestern Pacific during the second week of September, transitioned to a powerful wind and rainstorm over the Bering Sea, causing immense flooding in areas of western Alaska.

In the western town of Golovin, a surge of water from the Bering Sea reportedly covered half of an old airport runway late Friday. Images shared by the NWS office in Fairbanks showed the community completely under water, with water expected to continue to rise 1-2 feet by Saturday afternoon, local time.

Power outages became rampant in Golovin Saturday morning, with reports of significant flooding and damage in the town potentially including old fuel tanks. Local structures such as a church and a trading post were impacted by the flooding, and the entire village eventually had to be evacuated from their homes.

In the community of Newtok, residents were slammed with water, cut off from the local airport while flooding hit at least 12 homes in the area. An estimated 100 feet of shoreline was lost due to the flooding, and a 5,000-gallon fuel tank was washed away in the chaos.

The water levels shocked some local officials, such as Tribal Chief Edgar Tall of Hooper Bay, who told Alaska Public Media News that he's "never seen a storm like this" in the state. Over 100 residents of Hooper Bay sheltered at the local schoolhouse amid concerning water levels, while at least three houses in the area were moved off their foundations.

Multiple airports have also come under heavy strife from the high water and flooding, such as Kotlik Airport and Nome Airport, both residing on the western coast of the state. As of Saturday afternoon, Nome was battling an 8 inch storm surge, flooding vehicles parked outside of the airport. Flights to both Nome and the city of Kotzbue were cancelled Saturday from Ted Stevens Anchorage Airport due to the conditions.

As a result of the chaos, Alaska Governor Mike Dunleavy declared a disaster for communities impacted by the storms. The governor stated that no reports of injuries have been received as of Saturday afternoon. At least three homes have been moved from their foundations, according to Tribal Chief Edgar Tall.

On Saturday afternoon, flood waters caused about 110 people to shelter at the Hooper Bay School located on the southern west coast of Alaska in Hooper Bay, according to KYUK News.

The storm is packing a tremendous punch in terms of wind and precipitation, and has a history of producing wave heights above 35 feet and wind gusts past 74 mph. A satellite image posted by the National Weather Service (NWS) showed the shear breadth of the cloud cover associated with the powerful storm late Friday.

This storm is so big it will take about 3 hours for the sun to fully set on it. pic.twitter.com/uZCZ3Lxu0j

The storm rapidly intensified in terms of low pressure, exceeding the threshold for a bomb cyclone. "The drop in Merbok's pressure before becoming non-tropical was about 0.86 inches of mercury (29 millibars) in 24 hours," AccuWeather Senior Weather Editor Jesse Ferrell said.

This is not the normal time of year to have a huge storm in the area. NOAA said the cyclone, which had dipped to a pressure of 950 mb early Saturday morning, was the deepest low pressure in the Bering Sea in September since 2005.

The tropical rain and wind storm could be one of the worst ever to hit western Alaska in terms of wind, heavy seas and coastal flooding. During Thursday night, local time, the storm produced wind gusts to hurricane force (81 mph) as temperatures surged to near 70 degrees Fahrenheit on Adak Island, located near the western end of the Aleutians. The normal high on Adak Island is in the low 50s in mid-September. Monstrous seas in the region were the height of four-story buildings. 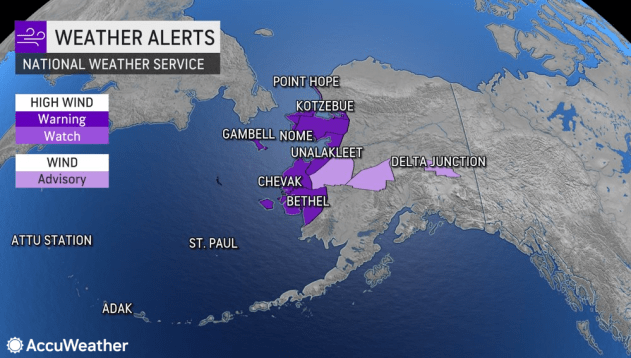 The effects of the system could rival that of the 2011 Bering Sea Superstorm, according to the National Weather Service. However, Merbok could be more dangerous and damaging in that it is likely to track farther to the southeast, sprawl and affect more populated areas along Alaska's west coast as a result. Peak gusts of 93 mph from the 2011 Superstorm were on Little Diomede Island, located on the northwestern tip of Alaska, near the dividing line between the U.S. and Russia.

The strongest storm in over a decade is moving into the Bering Sea. Impacts may exceed the 2011 Bering Sea Superstorm, and some locations may experience their worst coastal flooding in nearly 50 years. Peak water levels will persist for 10 to 14 hours before water recedes. #akwx pic.twitter.com/l1Ik4iXYBG

Impacts in Nome, Alaska, are likely to be severe with hurricane-force wind gusts, periods of heavy rain and a storm surge as high as 12-18 feet along the eastern end of Hooper Bay.

The worst surge conditions in the area are likely into Saturday night. The storm surge alone can lead to major coastal flooding in low-lying areas. Wave action on top of the storm surge can lead to additional coastal erosion and property damage.

"Gusts frequenting 50-75 mph are likely with AccuWeather Local StormMax™ wind gusts to near 100 mph along the upper west coast of Alaska and in portions of the Aleutian Islands," AccuWeather Lead Storm Warning Meteorologist Mike Youman said. At this force, trees may topple, large branches may break, and damage to roofs and poorly constructed buildings is likely, as are substantial power outages. 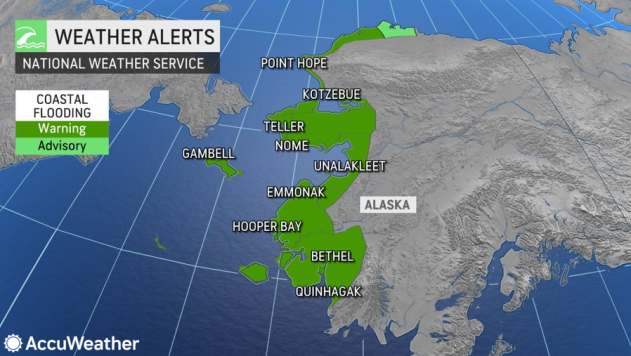 The enraged state of the sea will make for life-threatening conditions for fishing operations. Small craft should remain in port under these conditions, experts advise.

Rounds of heavy rain in the western portion of Alaska can lead to flash flooding and debris flows, especially, but not limited to, recent wildfire burn scar areas.

Most of the impacts from Merbok will be confined to the western and northern parts of Alaska. Some showers may reach Fairbanks this weekend, and some rain from a secondary spin-off storm is likely to fall on Anchorage from Sunday night to Monday. But these impacts will be minimal, forecasters say.

As the storm continues to transition to more of a non-tropical system, heavy snow will be unloaded over Alaska's interior. 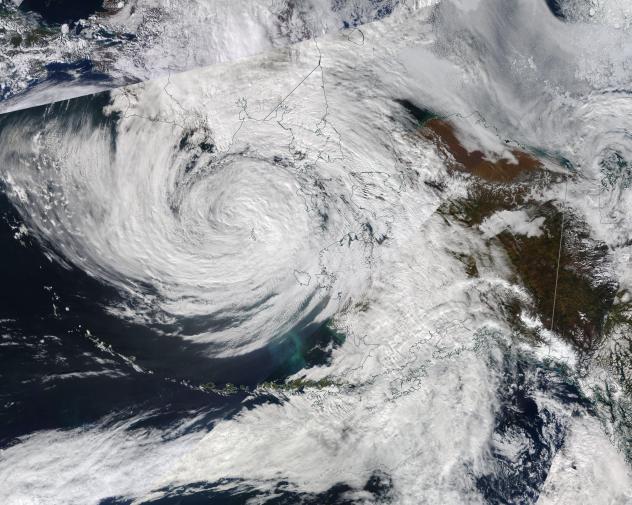 This image, captured on Friday, Sept. 16, 2022, shows the former Typhoon Merbok over the Bering Sea (left of center). Alaska is visible (right of center) as well. (Terra/MODIS/NASA WorldView)

"From 1-2 feet of snow may fall over the higher terrain of the Brooks Range located over northern Alaska this weekend," AccuWeather Senior Meteorologist Bob Smerbeck said. "Locally heavy snow is also likely to fall later this weekend to early next week over the Alaska Range, which arches well to the west, north and east of the Anchorage area.

Merbok will gradually unwind later this weekend into next week as it drifts across the Arctic Circle.