Although conditions may improve in time for the holiday, AccuWeather meteorologists say the wet weather will disrupt outdoor plans and travel into midweek.

Florida will not live up to its nickname through the middle of the week as an extended stretch of wet weather will keep sunshine at bay, disrupt bustling holiday travel and make for downright lousy weather at the beaches and amusement parks.

A stubborn disturbance will deliver repeated rounds of showers and even some steadier rain at times through the first half of the week, according to AccuWeather Meteorologist La Troy Thornton.

Sunday marked the start of the rainy stretch for many across the Sunshine State with rain dampening areas from Jacksonville to Tampa and Miami.

Miami set a daily rainfall record on Sunday, recording 4.46 inches of rain. The previous record of 1.29 was from back in 1999. Into Monday afternoon, the storm brought a total of 5.53 inches of rain to the city. From Nov. 1-21, just over 8 inches of rain has fallen on Miami, which is three times that of average.

The Miami-Dade Water and Sewer Department stated that the immense rainfall caused a sewer overflow of about 200,000 gallons at the Central District Wastewater Treatment Plant in Virginia Key. The overflow led to county officials issuing no-swim advisories for beaches in Virginia Key and Key Biscayne. 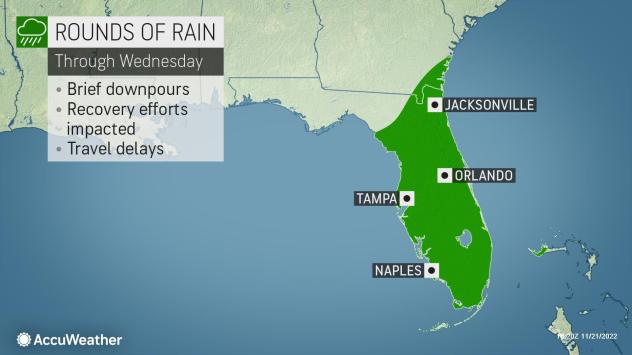 AccuWeather meteorologists say long dry spells will be hard to come by across much of the Florida Peninsula in the coming days, necessitating residents and visitors to keep a rain jacket and umbrella handy. AccuWeather's exclusive MinuteCast® will be a vital resource for people to use before heading out the door to receive minute-by-minute rain information for their specific location.

Through the course of the next few days, a general 1-3 inches of rain can fall across the peninsula with locally higher amounts possible in the areas that get hit repeatedly with downpours. The southwestern part of the state may be one exception, where rainfall is not expected to be as persistent and totals average under an inch.

Experts say air travelers should anticipate weather delays at the major hubs in addition to the slower travel expected as a result of the Thanksgiving holiday. On the roadways, motorists can face reduced visibility as a result of blowing spray, along with ponding water and an increased risk of hydroplaning on stretches of interstates 4, 10, 75 and 95.

Given how the rainfall will be spread out over several days, AccuWeather meteorologists say the risk of flooding will be quite low, with urban, low-lying and poor drainage areas most at risk to experience pooling of water.

Any rain will only add further misery to those still picking up the pieces in the wake of two recent hurricane strikes -- Ian in late September and Nicole earlier this month. Water recession may be slowed along the St. Johns River, where minor to moderate flooding continues in the wake of both tropical systems.

AccuWeather forecasters are also concerned about prolonged coastal impacts along the eastern beaches as a result of an onshore wind, including high-tide flooding and rough surf. Daytona Beach, an area hit hard by pounding surf and beach erosion from Nicole, is among the areas at risk. Statements warning of hazardous conditions, including rip currents, have been issued for the beaches of Florida's east coast.

Unsettled seas are also expected throughout the Gulf of Mexico and along the west coast of Florida, with operators of small craft advised to use caution.

The good news is that there should be a break in the rain and generally unsettled conditions on Thanksgiving itself, according to AccuWeather Senior Meteorologist Bill Deger. Stray showers may remain in eastern areas but much of the state should be dry.

Although the stalled-out disturbance across Florida in the days leading up to Thanksgiving will be non-tropical in nature, AccuWeather's expert team of tropical forecasters says it's too early to rule out additional development this season. Nicole was the last storm to form in the basin, and the next name on the list is Owen. 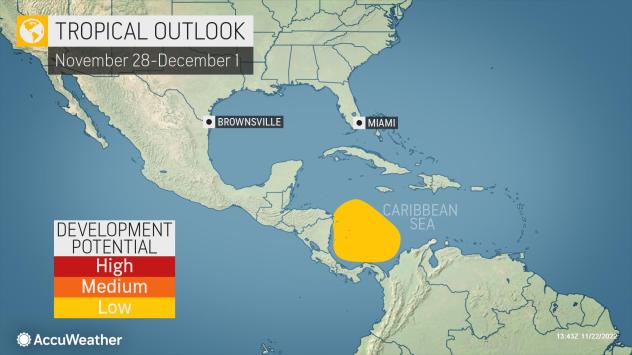 "In the longer range, the western Caribbean Sea is being monitored for potential development at the end of the month," AccuWeather Meteorologist Brandon Buckingham said. "With low wind shear and very warm water in this area, conditions could become conducive for development between Nov. 28 - Dec. 1."