Weekend to bring brief break in warmth, humidity in Northeast 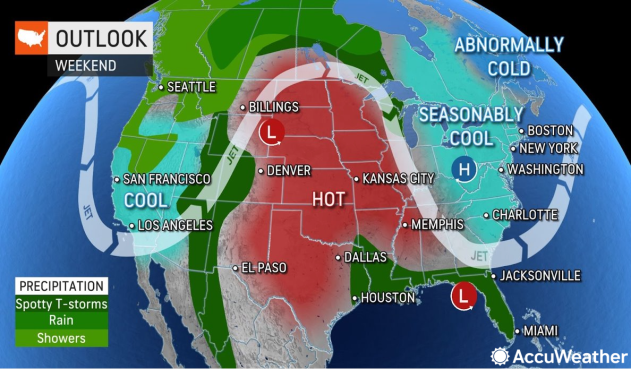 AccuWeather meteorologists say that a cool Father's Day weekend and Juneteenth can be expected in the Northeast. However, as is often the case in June, a surge of heat and humidity will follow soon thereafter in parts of the region.

Much of this week has been warm across the interior Northeast, while coastal locations largely missed out on the summerlike weather. Friday was a bit of a role reversal, as cities from Boston to New York City, Philadelphia and Washington, D.C., all had their highest temperatures of the week. Meanwhile, lower temperatures were found farther to the west.

In the wake of a warm and stormy Friday, an unseasonable chill settled in across a majority of the Northeast on Saturday. High temperatures on Saturday topped out in the 60s F at most for much of the region. Some parts of southern New England and portions of Pennsylvania and New Jersey barely broke into the lower 70s F.

After a cool Saturday, Sunday may be downright chilly, at least by June standards. A pocket of cold air in the upper atmosphere will move through New England. This will mean much more in the way of clouds, and showers will even be possible, although the rain is unlikely to be heavy enough to cause a rain delay for the U.S. Open in Brookline, Massachusetts.

Temperatures will be slightly higher on Juneteenth but will remain 10 to 15 F below normal. 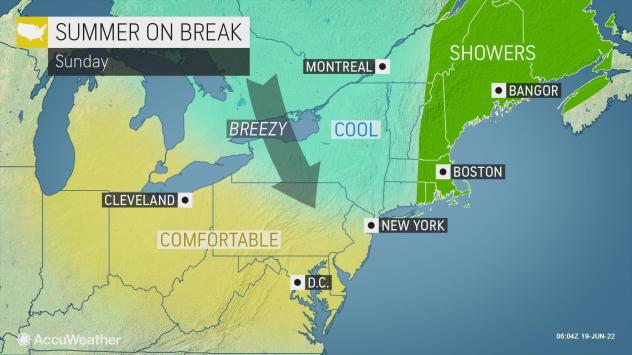 Sunday will again look damp in northern New England and along the coast near Boston, which could interfere with outdoor plans. Farther south, Sunday is forecast to be dry and mostly sunny. Even with sunshine, temperatures more typical of early to mid-May will be in place. Overnight temperatures will also be lower than average. Some of the coldest locations in the Adirondacks of upstate New York could dip into the upper 30s on both Saturday night and Sunday night.

"A dip in the jet stream will deepen across the Northeast this weekend allowing for cool Canadian air to shift southward across much of the region," explained AccuWeather Meteorologist Matt Benz.

The entire Northeast will be dry on Monday for the federal observation of Juneteenth, but temperatures are still expected to be near to below normal. 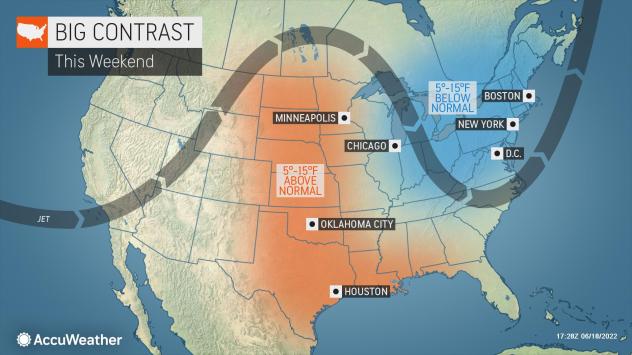 Heat and humidity will start to make a return to the Northeast Tuesday just in time for the official start of summer. Locations away from the coast will return to temperatures above normal and higher humidity.

"As a heat dome across the central U.S. builds again through the weekend, pieces of that warmth will try to sneak into the Northeast, especially for the interior into next week, which will lead to rebounding temperatures for much of the region," said Benz.

Late this week, higher humidity is expected to make it all the way to the coast as well. Even though the humidity will be elevated, high temperatures will not be far from normal. On the other hand, the higher humidity will lead to overnight lows trending above normal. Similar conditions should persist right into the first weekend of summer.