Excessive heat warnings are in place for a large swath of the Southwest, and the dangerous heat could lead to an uptick in wildfire activity across areas hit hard by drought.

A scorching heat wave that AccuWeather forecasters have been warning about for days will grow stronger in parts of the Southwest and Great Basin through the Labor Day weekend.

The dangerous late-summer heat wave is forecast to send temperatures soaring past 100 degrees Fahrenheit in parts of the West, including in California, where officials have already been discussing ways to protect against blackouts. In the Desert Southwest, temperatures well over 110 are forecast, and highs could even reach an astonishing 125 F in Death Valley, California, on Saturday, which is just 9 degrees shy of the world record air temperature of 134 F set there in July 1913.

The all-time September record high for the national park is 125, and AccuWeather meteorologists have predicted temperatures will reach that mark as early as Saturday. Thursday inched closer, for a record-breaking daily high of 124 degrees, besting 121 degrees for Sept. 1 set in 1948 and 1996, according to AccuWeather data.

Excessive heat warnings are in place for parts of Arizona, Nevada and Southern and Central California, and are expected to remain through Sunday until 8 p.m. local time, an indicator of just how intense and long-lasting forecasters say the heat will be. 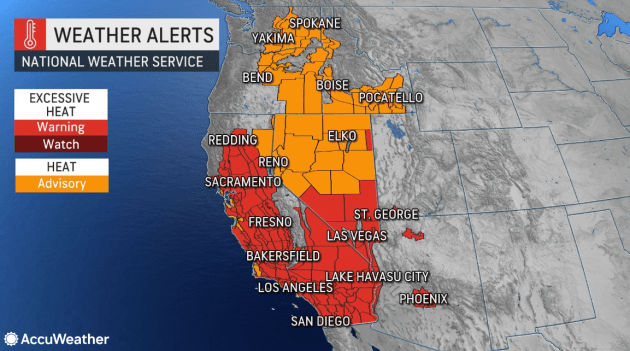 “I wish it were cooler already. This is abnormally hot for September,” said Abby Vines, spokesperson for Death Valley National Park, as she stood under the blazing sun, Reuters reported.

An impressive ridge of high pressure will build across the West and allow temperatures to rise steadily over time. Daily high temperature records are forecast to fall as days of dry conditions prolong the intense heat across the area, endangering millions.

"The risks associated with this heat wave are even more concerning than other heat waves because this will be happening through the Labor Day weekend, a holiday weekend when many people are spending additional time outdoors and may be less aware of the heat risks," explained AccuWeather Chief Meteorologist Jonathan Porter.

Porter also noted that many tourists and vacationers are expected to visit the impacted areas through the holiday weekend, and these visitors may be less accustomed to extreme heat precautions.

"Dry heat means that your sweat will evaporate almost instantly, to the point where you don’t even realize you’re sweating, your shirt doesn’t get soaked," noted Vines, "and so their bodies are cooling them down through sweating, and they might not realize how overheated they actually are and how dehydrated they are getting."

AccuWeather meteorologists said the prolonged nature of the heat will make people more susceptible to heat-related illnesses, such as heat stroke and heat exhaustion. Remaining well hydrated and spending time in the shade or cooler locations can help people stay safe in the heat.

One tourist seemed thrilled to be in Death Valley on Wednesday: "It’s good to be in the hottest place on Earth during a heat wave so you can truly experience what the Earth has to offer," he told Reuters.

Sizzling conditions continue across the Northwest

The heat wave is already underway across the Northwest, with the peak expected to have been on Thursday.

Spokane, Washington, tied the daily high record of 100 degrees Wednesday, which was established back in 1967. It was the sixth such 100-degree day in the city this year, tying a record for the number of days at that temperature. In Boise, Idaho, a temperature of 106 was recorded Wednesday, a temperature that broke the current daily record of 102 that has stood for the last 18 years, and was 20 degrees higher than normal in the city. 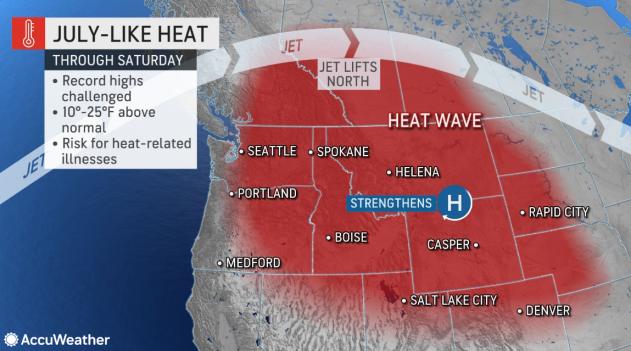 Above-normal temperatures are expected to continue into the start of the holiday weekend. Although high temperatures may not be as extreme as earlier in the week, they will remain well above normal, as much as 10-20 degrees Fahrenheit into Saturday. These temperature levels are more akin to the norm in July rather than in the first days of September.

The hot weather is also likely to worsen the drought that has held across the region.

In Portland, Oregon, temperatures averaged more than 4 degrees above normal for August. Similar numbers were reported in other cities such as Seattle. The combination of high heat and little rain has led to the spread of wildfires as well, with several major blazes burning in the region.

The dry weather and heat will likely exacerbate these issues into early September. However, AccuWeather long-range meteorologists expect the autumn to gradually turn wetter and cooler as the fall progresses.

Record-challenging heat to linger across the Southwest

Forecasters say that a persistent heat wave is also on the way for southwestern portions of the United States--and it won't be in a hurry to leave.

In an area that normally observes temperatures in the 90s or triple digits in late August and early September, meteorologists predict that afternoon high temperatures could be as much as 15-30 degrees above normal. This feat is not expected for only a day or two but could occur for a full week. 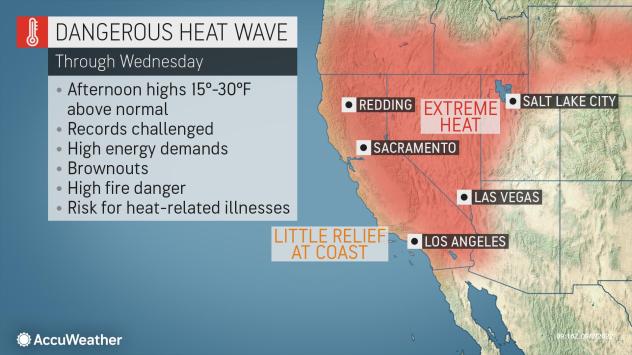 "The heat wave will be notable due to its persistence - day after day of extreme heat with temperatures, in some locations such as California’s capital of Sacramento, near or exceeding 110 F for three or more days in a row," said Porter.

The heat for some could peak just in time for the Labor Day holiday.

Death Valley is forecast to reach 123 degrees on Monday, which would approach the daily temperature record of 125, set back in 2020. 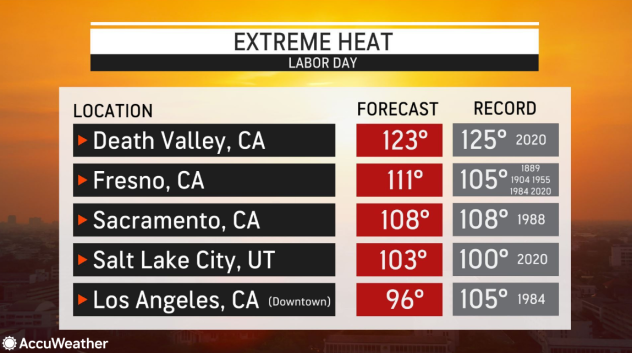 The all-time September record in Fresno, California, is 111 degrees, reached twice, on Sept. 3, 1955, and Sept. 11, 1888. These long-standing records will be challenged over the weekend, as temperatures are forecast to be near this record from Saturday through Tuesday. The city has never had any consecutive days of 110-degree temperatures in September.

Palm Springs hit 115 on Wednesday, a temperature just shy of the city's existing daily record of 118 from 1950. Temperatures were forecast to remain at 110 or higher there through the weekend.

In Las Vegas, temperatures are forecast to reach 110 throughout the holiday weekend, challenging daily records each day.

Animal shelters, in particular, have been mindful of the effects prolonged heat can have on the numerous dogs and cats that they protect. Workers at the NKLA Best Friends Animal Adoption Center in Los Angeles put out wading pools to help dogs "cool down their paws," Brittany Thorn, the executive director of the shelter, told Reuters. "It's very important to avoid any type of exercise when, you know, we're going through this extreme heat. It's okay to go out for short potty breaks or short walks, but it's really important to make sure that your dogs are not overheating."

In recent days and weeks, many Western states have avoided prolonged periods of intense heat that have been common this summer. The frequent rainfall and humidity provided by the North American monsoon have helped keep temperatures in check across the region.

The rainfall helped to lessen the intensity of the drought across portions of Arizona and New Mexico. However, the drought remains rampant in portions of California, Nevada and northern Utah, where the heat is likely to be the most extreme.

According to the U.S. Drought Monitor report released on Thursday, Aug. 25, nearly all of California, Nevada and Utah are under some stage of drought, with many places elsewhere in the West and much of the Plains also experiencing drought conditions. 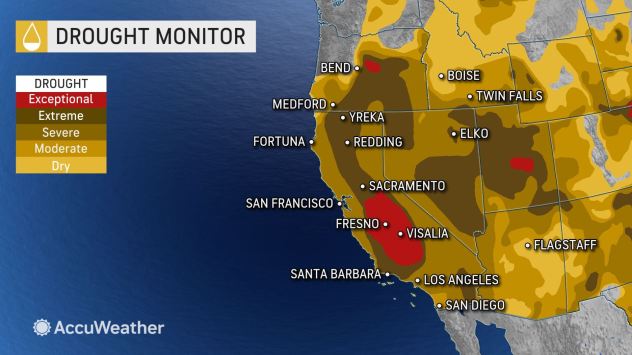 In the absence of rainfall, much of the ground has been able to dry out, contributing to the heat potential into early September.

"Associated with the heat wave, AccuWeather meteorologists are also warning of further intensification of the significant drought occurring in much of the West, a noted increase in wildfire risk during the heat wave and the possibility of the electrical grid in some communities notwithstanding huge spikes in demand driven by increased cooling demands resulting in rolling occurrences of utilities shuttering power," explained Porter.

The Sacramento Bee reported that Californians could be asked to conserve energy during the heat wave as energy officials hope to avoid blackouts.

Although there have been frequent rounds of flooding rainfall in the Southwest due to the ongoing North American monsoon, much more rain is needed to break the drought. With this change in the pattern, that relief is unlikely to arrive anytime soon, forecasters say.

However, there will be a chance of some additional moisture during September. AccuWeather meteorologists will watch for tropical development in the eastern Pacific Ocean during the Labor Day weekend.

"There is a chance a tropical storm or hurricane could swing northward and not only bring wind and rain to the Baja Peninsula of Mexico, but [a tropical system] could [also] inject more moisture into the southwestern U.S. sometime during the second week of September," AccuWeather Senior Meteorologist Alex Sosnowski said.