Wet and chilly weather has been the theme over the last several days in the United Kingdom as thousands of people have gathered in London to mourn the death of Queen Elizabeth II. In the days leading up to the queen's state funeral on Monday, Sept. 19, the weather pattern is expected to shift and allow drier weather to unfold, according to AccuWeather meteorologists.

On Wednesday, the weather cooperated in the British capital as the queen’s body was transported from Buckingham Palace to Westminster Hall in a public procession, where she will remain until Monday morning. The queen's coffin was carried by a gun carriage of the King’s Troops Royal Horse Artillery alongside members of the royal family and a military parade.

Waiting in Line To Honor The Queen

After arriving at Westminster Hall, her coffin was placed on a centralized platform, and the Imperial State Crown, scepter and orb were laid upon it. The hall will be open to the public 24 hours a day after the ceremony through Monday morning.

Approximately 750,000 people are expected to travel to London from this past Wednesday to next Monday to pay their respects, according to The Guardian. The last time a member of the royal family lay in state in Westminster Hall was in 2002 when the Queen Mother passed away. During that mourning period, over 200,000 people visited the hall to pay their respects. 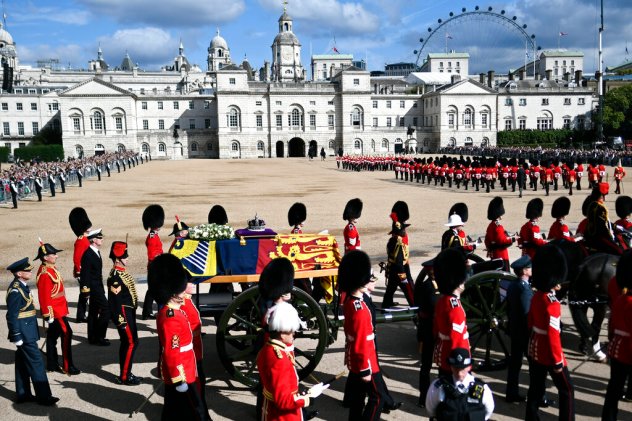 The coffin of Queen Elizabeth II, adorned with a Royal Standard and the Imperial State Crown and pulled by a Gun Carriage of The King's Troop Royal Horse Artillery, travels across Horseguards Parade Ground during a procession from Buckingham Palace to the Palace of Westminster, in London, Wednesday, Sept. 14, 2022. (Stephane de Sakutin/Pool via AP)

For members of the public waiting in line to enter Westminster Hall this week, officials estimate that the wait times can be expected to stretch as long as 30 hours, the New York Post reported.

Sharon Stapleton, who began waiting in the line at 9 p.m. Tuesday night, told CBS News about the weather conditions late Tuesday into Wednesday. "It's been a long night. It's been raining, very wet, a bit cold," she said. "But it's worth every minute of it."

Lines are reportedly stretching miles long, with people planning to hold their spot day and night.

“Conditions look to remain largely dry with sunny periods through Monday, but there can be the odd shower on Sunday,” explained AccuWeather Lead International Forecaster Jason Nicholls.

For those waiting in line outdoors, it may be best to have a brolly in hand in case of light showers. Umbrellas, or brollies in the United Kingdom, were a staple accessory to the late Queen Elizabeth II, living in a country that rains nearly 43% of the year.

By Friday night, conditions could become brisk for anyone remaining outside across London. Temperatures are forecast to drop into the middle 40s F (6-7 C) after midnight, slightly below average for mid-September.

“It will feel quite chilly for this time of year, and even with a light wind, it will make it feel even colder, especially along the line of those waiting between buildings,” stated AccuWeather Senior Meteorologist Alan Reppert.

AccuWeather forecasters recommend that anyone remaining outside Friday night should try to bundle up and dress warmly for a chilly, breezy night.

On Saturday, sunshine is expected with a high temperature near 60 F (16 C). 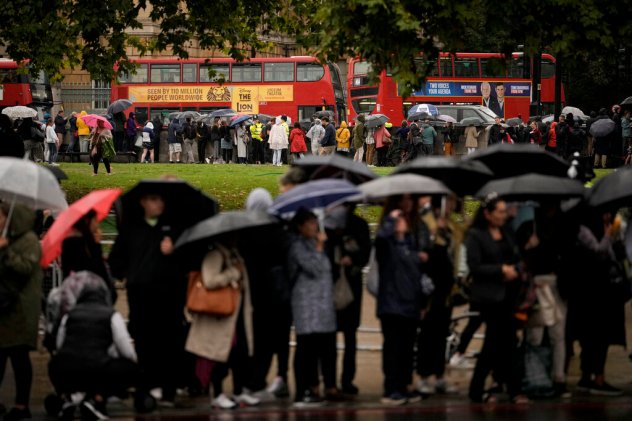 People line up the streets waiting for the State Hearse carrying the coffin of Queen Elizabeth II to pass on its way to Buckingham Palace in London, Tuesday, Sept. 13, 2022. Queen Elizabeth II, Britain's longest-reigning monarch and a rock of stability across much of a turbulent century, died Thursday, Sept. 8, 2022, after 70 years on the throne, at the age of 96. (AP Photo/Andreea Alexandru)

On Sunday, conditions may remain cool as afternoon temperatures only rise into the lower 60s F (17-18 C). At 8 p.m. local time, officials will conduct a one-minute moment of silence across the United Kingdom in honor of Queen Elizabeth II.

During the morning hours on Monday, forecasters say that the conditions will remain largely calm and dry across southern England with intervals of clouds and sunshine. The funeral is scheduled to begin at 11 a.m.

“It will feel a bit milder on Monday with temperatures rising to the mid-60s F (17-18 C),” stated Nicholls.

In the days following the services on Monday, an area of high pressure will likely linger across the central United Kingdom and promote generally dry weather. Areas of low clouds and even fog may occur early next week as high pressure becomes situated over the region.