Although conditions will improve in parts of the region over the weekend, there will be some areas of storms to monitor.

Forecasters expect heat to ramp back up in the Northeast early this week, posing more difficulties for Americans still without power in the wake of Isaias's rampaging winds.

Isaias left 3.5 million in the dark from North Carolina to Maine last week after it pummeled the East Coast. As of early Monday morning, more than 175,000 customers were still without power, according to poweroutage.us.

Public Service Enterprise Group (PSEG), a utility company serving New Jersey, reported Thursday that Isaias caused the biggest weather-related outage since Superstorm Sandy in 2012 and was its fifth most severe storm in history.

As cleanup continues, it will turn much warmer, if not hotter, into Tuesday. The uptick in temperatures will be noticeable following cloudy and wet conditions that have held daytime temperatures back to near- to- slightly-below-average levels in some cases this past week. 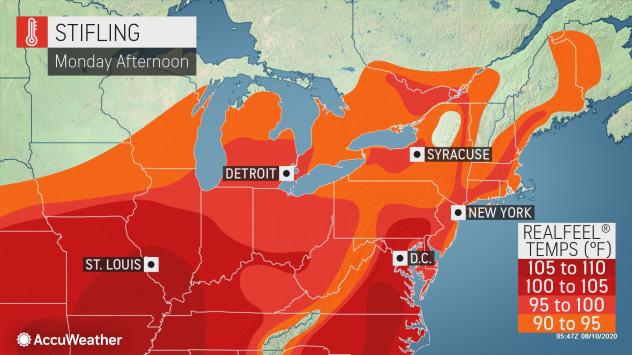 "Highs are forecast to trend back to being five to 10 degrees Fahrenheit above average in much of the Northeast early this week," AccuWeather Meteorologist Jake Sojda said.

During the middle of August, high temperatures typically range from the upper 70s in northern New England to near 90 in southeastern Virginia.

High temperatures will be back into the 90-degree-Fahrenheit ballpark early this week along much of the Interstate 95 corridor.

With a lack of any strong weather systems around, winds will generally be light outside of highly-localized thunderstorms. Typical of August, the lack of a substantial breeze will add to how hot it feels. 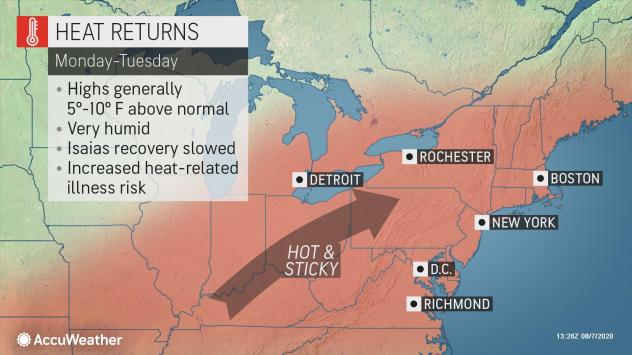 "While record highs are not foreseen in the pattern and are not likely to top the high marks achieved in July, AccuWeather RealFeel® Temperatures will be at levels that make cleanup operations difficult," Sojda said.

AccuWeather’s fall forecast: Where will autumn weather arrive 1st in US?
What history will remember about Isaias
How to stay safe when a hurricane causes power outages

The nights will be warm and muggy and can cause difficulty for those trying to rest up without an air conditioner or fan for the next day's activities ahead, Sojda added.

People are urged to remain hydrated and avoid strenuous activity during the peak of the heat during the afternoon hours. The coolest part of the day will generally be the first few hours of daylight.

As summer heat intensifies once again, AccuWeather meteorologists are also reminding people to remain vigilant of additional threats from the tropics. AccuWeather tropical forecasters, led by Senior Meteorologist Dan Kottlowski, expect the heart of the 2020 Atlantic hurricane season to be "hyperactive." The basin is likely to spawn more threats to the United States, according to the most recent prediction issued by the company, which also cautioned that additional impacts will be possible along the Eastern Seaboard.