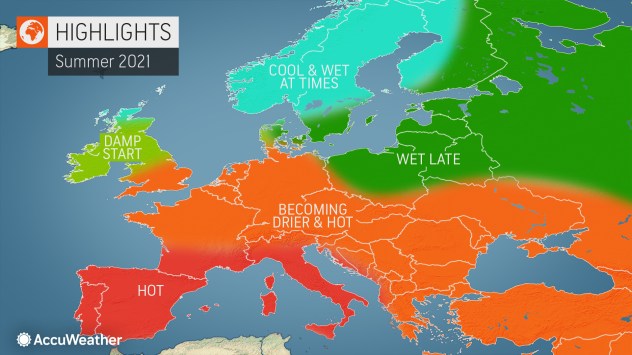 Parts of Europe had a taste of summer amid a hot spell during late March, but it was followed by a harsh blast of winter weather in April that likely served as a reality check. Many across Europe may be looking forward to the warmer weather that summer often brings, and perhaps are even planning holidays as pandemic restrictions ease.

AccuWeather's team of long-range meteorologists warns that heat expanding across Europe through the summer and a lack of widespread rainfall can create agricultural issues. Even some summer crops that are typically resilient amid drought conditions may face issues after winter weather lingered in spring and may have impacted the hardiness of the plants.

As the second consecutive summer during a global pandemic approaches, some signs of normalcy are returning. AccuWeather forecasters break down what people can expect weather-wise during the season in a complete region-by-region breakdown below:

The core of heat this summer will be located across Portugal, Spain, southern France and much of Italy as heat from northern Africa spreads north into southern Europe.

Temperatures across southwest and south-central Europe are expected to be near to above normal throughout the summer months. Normal high temperatures rise from the 21-26 C (70s F) in June to 26-34 C (80s to lower 90s F) in July. By August, temperatures begin to trend cooler again.

In addition to scorching temperatures, precipitation is expected to be below normal as the storm track shifts well north of southern Europe throughout the season. While a summer of hot and dry conditions would typically raise concerns about the amount of water available in the reservoirs across Spain, a potent winter storm earlier in the year may play a part in easing the concerns about water scarcity.

Record-setting Storm Filomena swept across the Iberian Peninsula in January, bringing an estimated 33 cm (13 inches) of snow to Madrid over four days, while there were reports of up to 60 cm (24 inches) in surrounding areas. Several people were killed in northeastern Spain in the blast of Arctic air that followed the storm. The temperature dropped to 13.4 degrees Fahrenheit below zero (25.2 degrees Celsius below zero) in Molina de Aragón, the lowest for the month of January in the city since 1981.

The snow in mountains has been gradually melting throughout the spring and is expected to continue melting into the summer. Runoff from high up in the mountains can collect in the reservoirs and can keep the water levels higher despite the predicted lack of consistent rainfall this summer. Additionally, near- to above-normal rainfall in April added to the available water supply.

A lack of rainfall can delay crops, including olive trees, until water from the mountains runs down into the rivers and reservoirs in these areas. Olive trees are drought resistant; however, newly planted trees need moist soil to thrive.

The stress from freezing temperatures earlier this year can cause the olive crops to be susceptible to the heat and lack of rainfall expected in Spain and Portugal, said AccuWeather Senior Meteorologist Alan Reppert.

But this will largely depend on how far above normal the temperatures are able to climb.

Heat to expand into central Europe

The storm track across Europe will continue to push north throughout the summer, and drier conditions will build over central and southeastern portions of the continent. 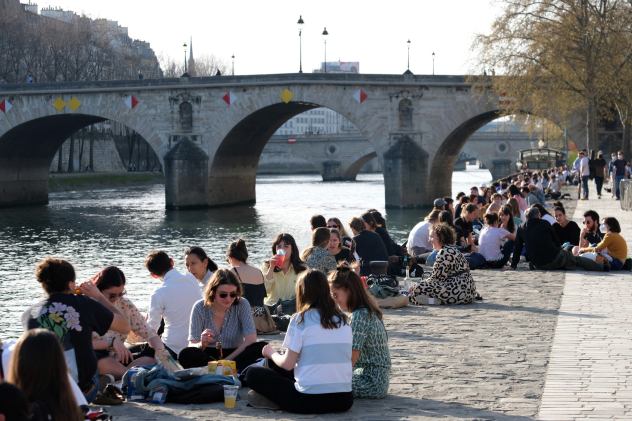 People enjoy the sunny weather along the Canal Saint-Martin despite the Coronavirus Pandemic in Paris, France, on March 31, 2021. Critical care doctors in Paris say surging coronavirus infections could soon overwhelm their ability to care for the sick in the French capital's hospitals, possibly forcing them to choose which patients they have the resources to save. President Macron is expected to give a TV speech on Wednesday detailing possible new restrictions to fight Covid-19. (Photo by Aurore Marechal/ABACAPRESS.COM)

As the storm track pushes north, heat will also expand from Spain and Italy and as far as the southern United Kingdom, northern France, Belgium, Germany, southern Poland, Ukraine, and the Balkan countries. However, the expansion of the warmer weather will not be consistent across these areas.

“There can be heat in the west and in the east, but never at the same time,” said AccuWeather Senior Meteorologist Tyler Roys. “It’s very rare for heat to be that widespread. It is more likely for heat to come in waves.”

The spread of warmer weather will also be gradual, and the farther away from the core of the heat, the longer it will take for above-normal temperatures to reach an area. Persistent heat in Paris and Berlin is expected to be delayed until late July and August.

In addition to the heat, this can be the third straight summer with below-normal precipitation across France and Germany as well as into the United Kingdom, said Roys.

“This can lead to growing problems for the summer crop, including wheat and corn in France and Germany,” explained Roys. “In France, much of the wine crop has already been lost due to the freezes earlier in April.”

At least one-third of the wine production in France will be lost this year after a blast of Arctic air and even areas of snow created headaches for farmers this year, The Guardian reported.

Michel-Henri Ratte, like other farmers, spent several nights lighting small fires and large candles in an attempt to keep the vines warm; however, Mother Nature won out and Ratte expects a 100% loss on this year's harvest, according to The Guardian.

Anything that is left is already stressed from the freezes and can be susceptible to heat and drier conditions expected to develop this summer, added Reppert.

While hot and dry conditions can settle in by the middle to latter part of summer, that weather pattern will not eliminate the risk of severe thunderstorms across the center of the continent.

Widespread severe weather is not expected across central Europe, said Roys, which is typical for the continent. Heavy downpours from thunderstorms are expected to be more localized.

Damp start in the U.K.

As the U.K. and Ireland wait for the arrival of typical summer temperatures, rounds of showery weather will linger over the region through at least the beginning of summer.

While wet weather will persist over Ireland, Scotland and northern England through at least June and into July, precipitation is forecast to remain below normal throughout the rest of the season.

Last month ranked among the top-five driest Aprils on record across southern England, and that trend could continue through the rest of May. This theme can continue across parts of the area during the summer, which could cause problems as the growing season kicks off.

“Last year was the worst crop of wheat for the U.K. because of a dry start early in the season,” said Roys. This growing season could be similar with below-normal precipitation expected across the Midlands, southern England and Wales.

Some wet weather can push into this area in August, but it may be too late for crops, warned Roys. “By that point the damage will be mostly done,” he added.

With the storm track nearby in Scotland and northern England, precipitation is expected to be closer to normal. This will also keep temperatures near to below normal (15-21 C or 60s and 70s F) for the region.

Temperatures more typical of the summer months are expected to arrive in early July. Highs reaching 30 degrees Celsius (86 degrees Fahrenheit) or higher are most likely to occur between July 1 and Aug. 15.

Cool, wet in Scandinavia and the Baltics

Due to the slow progression of heat from southern Europe, above-normal temperatures are expected to stop short of the northernmost reaches of the continent.

A storm track from north of the U.K. and into Norway and Sweden will help to block the progression of warmer conditions to the north and will also keep rounds of rainy weather over the region.

By August, this storm track is expected to continue its northward march into northeastern Europe, bringing rounds of unsettled weather to the Baltic states as well as Poland and Belarus and on into western Russia. 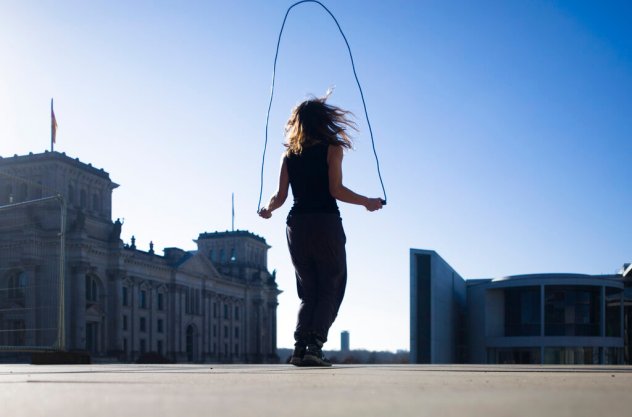 A women exercises with a jump rope upside the Reichstag building on a sunny day in Berlin, Germany, Monday, Feb. 22, 2021. (AP Photo/Markus Schreiber)

Temperatures in Poland will be near to below normal. Berlin will sit closer to the edge of more intense summer heat.

"The heat typically builds into central Europe and stops around far eastern Germany," said Roys, adding that the much wetter pattern expected in Poland and the Baltic states can limit how high temperatures can climb.

More saturated soil can also help to moderate the temperature during the summer months as energy from the sun works to evaporate the moisture from the soil rather than warming the air.

Normal high temperatures around Germany and Poland are 21-26 C (70s F) during the summer months.