September to remember: 8 monster storms across the world

After an unusually quiet August in the Atlantic, 8 major tropical cyclones wreaked havoc from Asia to Canada.

After a record-quiet start to the hurricane season in August, "the rubberband snapped," as AccuWeather's founder is fond of saying, and a new weather pattern delivered 23 tropical cyclones, including 8 blockbuster storms that affected Asia to Alaska to Atlantic Canada, Puerto Rico, and Florida.

These 8 storms made headlines worldwide, killing hundreds and causing hundreds of thousands of dollars in damage.

Aug. 31: August closes as a record-slow month in the Atlantic

Eschewing the definition of "hurricane season," a season that was forecast to be above normal produced no named storms in August for the first time in 25 years, and for only the third time in the satellite era, when accurate records began. Then, things heated up a bit. 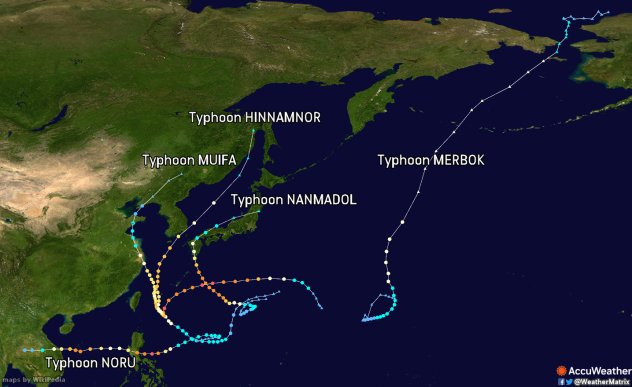 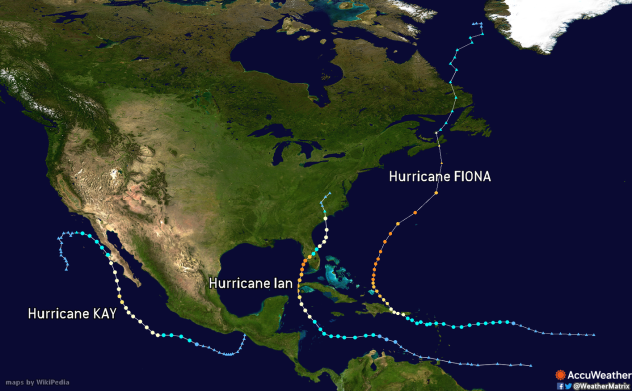 As the Atlantic wrapped its record lame month, a monster Category 5 Super Typhoon was aiming for Japan. Typhoon Hinnamnor slammed into Okinawa, Japan on Sep. 2, with high winds & rain, then made landfall in South Korea, dropping 40 inches of rain and killing several people on Sep. 5, 2022.

While the Atlantic had been quiet in August, the Eastern Pacific was not. So it was fitting that the first U.S. location to be affected by a tropical system this season was southern California, which was approached by a Category 2 storm, Hurricane Kay. Tropical Rainstorm Kay became one of the closest tropical storms to approach Los Angeles and San Diego, causing wind gusts well over 100 mph in the Southern California mountains and feet of flooding rain from there into southern Nevada. 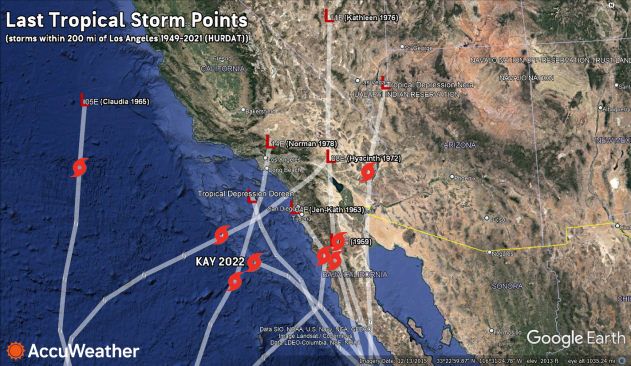 Although many tropical storms have affected the Southwest, few have been officially tracked as close to Southern California as Tropical Storm Kay.

Another very strong storm, Category 4 Typhoon Muifa, hit Okinawa 10 days after Hinnamnor, then slammed into Shanghai, China on Sep. 14, where it became the most powerful typhoon ever to hit the city. 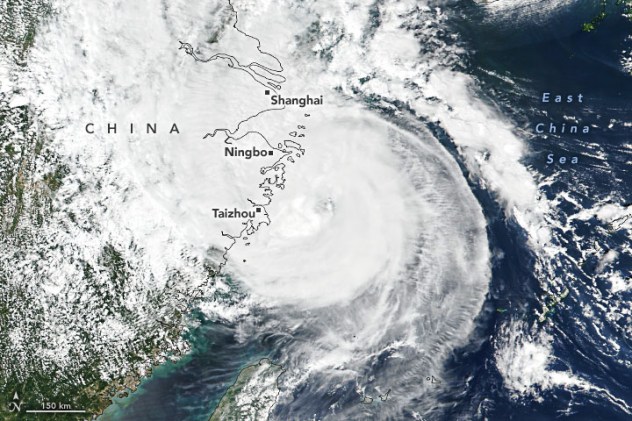 California was the first U.S. state to be affected by a tropical storm in 2022; the next would be an unusual pick as well. Typhoon Merbok was born and lived at sea -- until he transitioned into a very deep extratropical storm that caused record storm surges in Alaska, put multiple airports underwater, and caused the governor to issue a state of emergency.

While Alaska was being hit by a former typhoon, 8 million people were evacuated from southern Japan as Category 4 Super Typhoon Nanmadol approached and threatened to traverse the entire island chain. Once a powerful Super Typhoon, it still qualified as the fourth-deepest typhoon to make landfall in Japan. One city measured 35 inches of rain. This was the third typhoon in as many weeks to affect Japan and South Korea. 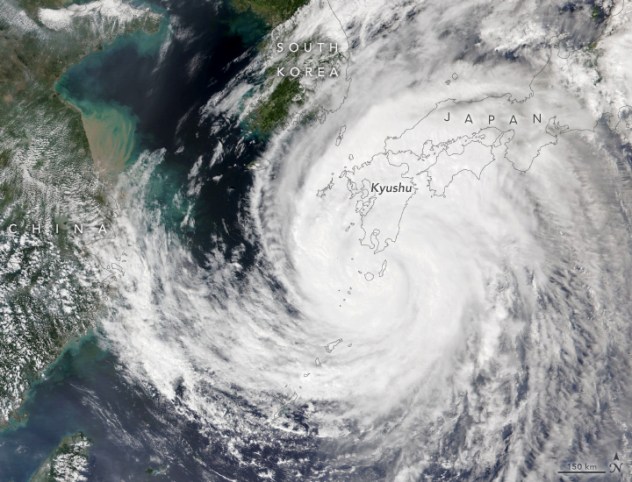 Typhoon Nanmadol Just before midday on September 18. The NOAA-20 satellite acquired this natural-color image of the storm. (NASA Earth Observatory)

Hurricane Fiona made landfall as a minimal hurricane on southwest Puerto Rico on September 16, knocking out power for the entire island and unleashing 30 inches of flooding rain, much like Hurricane Maria did in 2017. Fortunately, the wind damage was not as severe, as Maria was a Category 5 storm.

After leaving the Caribbean, Fiona became a Category 4 hurricane, brushed by Bermuda (the third storm to do so this season!), then transitioned to a wind and rain storm, hitting Canada as the strongest (meteorological, as measured by pressure) and most expensive storm ever to make landfall in Canada. Between Puerto Rico and Canada, damage estimates ranged between $2 and $4 million.

After no mainland U.S. landfall this season, computer forecast models agreed in early September something big was about to happen in the Gulf Of Mexico towards the end of the month -- a major hurricane would hit somewhere in Florida. NHC made Tropical Depression #9 official on September 23.

Hurricane Ian was born on Sep. 26 and made landfall in Cuba as a Cat 3 the next day. Explosive strengthening took it to 155 mph sustained winds, just 1 mph shy of a Category 5 Hurricane just before it hit near Fort Myers, Florida on Sept. 28 with 150 mph winds. 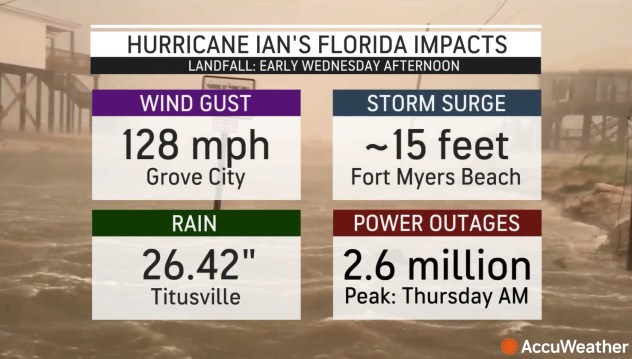 More than 3 million lost power in Florida with 128-mph gusts recorded, and over two feet of rain (see a complete list of Hurricane Ian statistics that I compiled here). But Ian wasn't done yet, making landfall again as a hurricane in South Carolina, then brought snow and sleet to parts of the southern Appalachians. Energy from Tropical Rainstorm Ian then contributed to a Nor'easter forming, plaguing the mid-Atlantic coast with high winds and storm surge for days.

While Hurricane Ian was approaching the U.S., another historic storm was forming in the West Pacific. Typhoon Noru rapidly intensified into a Super Typhoon (Category 5) just before it slammed into the Philippines on Sept. 25. It then made a second landfall in Vietnam two days later, causing deadly flooding for the second time. 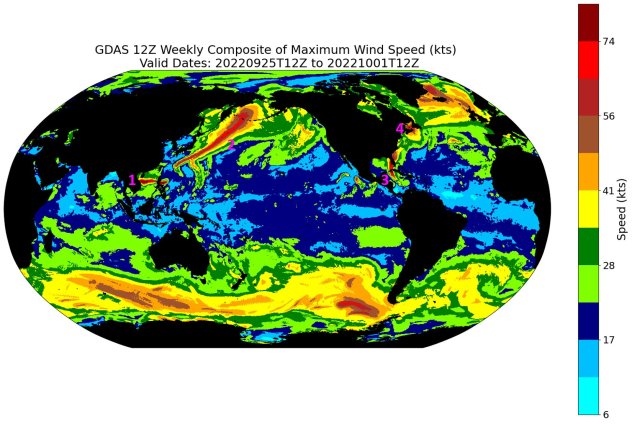