It's been a long week in weather. On October 24, a bomb cyclone hit the West Coast with winds over 150 mph, 16 inches of rain, and 42 inches of snow. Plus: A new record low pressure for the Pacific Northwest. 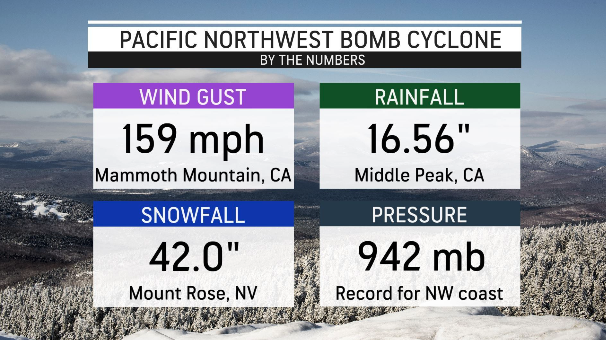 History in the making: The North Pacific Bomb Cyclone tracked directly over a buoy reporting 942 mb pressure, a new record for off the PacNW coast. Winds have gusted to 141 mph at Squaw Mountain, CA & 112 at Kirkwood & Mammoth. #CAwx pic.twitter.com/ybH9QEkwcH

It was actually the second of two bomb cyclones in the Pacific. Earlier in the week, winds to 83 mph were measured in Alaska, along with 40-foot waves:

From the first two bomb cyclones in the Pac NW this week, we saw 40-foot waves in the Alaska Aleutians, 35-foot waves off of British Columbia, with an 83 mph wind gust in AK and 79 mph in BC. #akwx #bcwx

Only a few days later a Nor'easter bombed out off the Northeast coast, bringing winds over 100 mph, nearly-4-foot storm surge, and knocking out power to more than 600,000 customers, and sending waves crashing over houses! 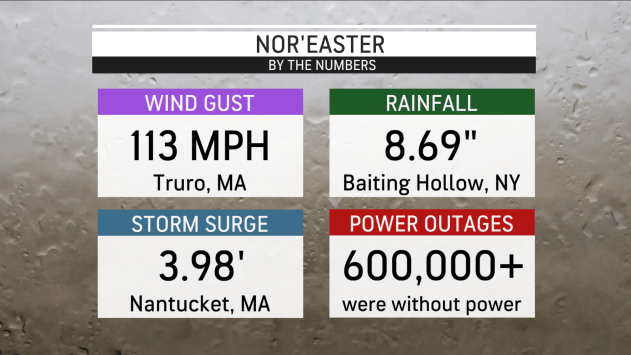 Waves churned up by a nor'easter crashed into a seawall in Scituate, Massachusetts, on Oct. 27, crashing down on the roofs of waterside homes.

This Nor'easter in the last days of October was the fourth major rain event for New York City this year, and was compared to The Perfect Storm, 30 years ago on Halloween.