The hidden story behind the invention of basketball

A shocking discovery of a radio recording revealed an overlooked, if not entirely forgotten, detail around the first basketball game — and it explained how the weather intervened.

How a blizzard influenced the invention of basketball

A rare radio interview with James Naismith, the inventor of basketball, has uncovered many revelations about the early days of the game.

Millions of basketball fans people tune into March Madness every year, but few may know the story behind the invention of the sport.

James Naismith, a physical instructor at Springfield College in Massachusetts, was credited with setting up the first basketball game over 100 years ago. However, silence surrounded his story until Dr. Michael Zogry of the University of Kansas's Religious Studies Department dug deeper into Naismith's history.

While conducting research about Naismith, Zogry noticed there had not been any audio recordings of Naismith uncovered.

"There are a couple of film clips of Naismith, but there's no sound," Zogry told AccuWeather's Greg Bowman.

While looking for any existing recordings, Zogry found references to Naismith on a national radio program in 1939.

"In January of 1939, he went to New York, and he appeared on this program which was a popular radio program of the day. So, I told my research assistant 'let's try to track down any archives,'" Zogry said.

After digging a bit, Zogry and his assistant found what they were looking for: a recording of the radio broadcast of a program called "We the People." The Kansas City radio station did not have a clip of the recording, but as it turns out, the Library of Congress did.

"And so we contacted them, and lo and behold, there it was on that tape," Zogry said.

The newly-found recording, which surfaced in 2015, also revealed an overlooked, if not entirely forgotten, detail around the first basketball game.

Before basketball was invented, the only sports during the winter were calisthenics, gymnastics and similar activities. Sports that could be played indoors were rare during that time.

Naismith, an elite athlete himself, understood the need for something to occupy people during the winter months. 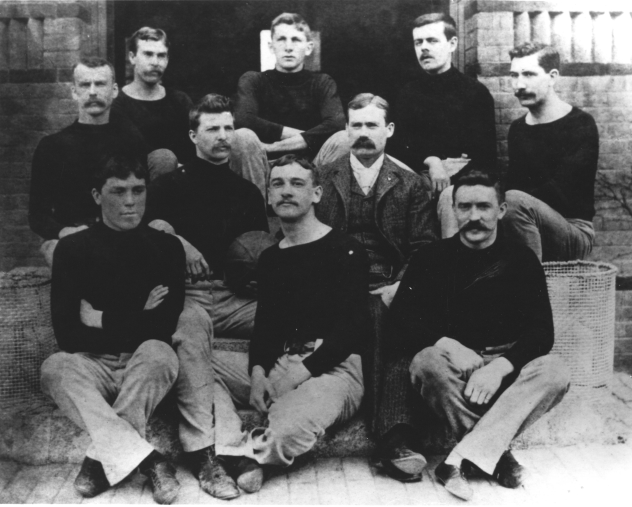 It turns out, the weather intervened in his quest to find a new indoor activity. As Naismith explained, a true New England blizzard unfolded in December of 1891.

On Dec. 16, 1891, a heavy gale prevailed along the New England coast including Springfield, Massachusetts, where Naismith was the physical instructor at Springfield College at the time. The storm unleashed snow during the evening across much of the state.

As the winter storm pummeled the area, it forced students indoors for an extended period. The students started to grow bored and began to roughhouse in the halls.

"We tried everything to keep them quiet; we tried playing a modified form of football in the gymnasium, but they got bored with that," Naismith said in the radio program.

Eventually, Naismith had an idea on how he can entertain his students during the winter storm. He divided them into teams of nine and gave them an old soccer ball. Two peach baskets were nailed on each side of the gym.

"I told them the idea was to throw the ball into the opposing team's peach basket," Naismith said.

The initial game of basketball had very few rules, and Naismith said that was big mistake. "The boys began tackling, kicking and punching," he described. "They ended up in a free-for-all in the middle of the gym floor. One boy was knocked out; several of them had black eyes."

After the first match, the students nagged Naismith to play basketball again. He feared that they would kill each other, so he created more rules to keep players in check during the game. Naismith instituted the rule that you cannot run with the ball. Tackling was also prohibited.

"We tried out the game with those rules, and we didn't have one causality. We had a fine, clean sport," Naismith explained.

Zorgy said it is important to note, "Naismith and all of his colleagues there were interested in a philosophy called muscular Christianity. The goal there was to affect the character of young people positively... to be a model for young people’s behavior."

Just 10 years later, basketball was being played across the nation and even became part of the Olympics by 1936.

"He really believed that there should be a way people could compete but play by these rules. That would be a good model for young people," said Zorgy.

Today, basketball is one of the most popular sports in the world. More than 10 million people watched March Madness in 2019, according to The Athletic. During the 2016 summer Olympic games, 12 countries competed for the gold medal.

“And the whole thing started with a couple of peach baskets I put up in a little gym," Naismith said. "It just goes to show what you can do if you have to."