Why do meteors glow in vibrant colors?

Meteor showers are one of nature’s most brilliant spectacles, each one bringing a unique experience for stargazers, including meteors glowing in a rainbow of colors.

Meteor showers occur several times a year when the Earth passes through a field of debris, such as particles from asteroids or grains of dust from a comet.

This debris burns up as it enters the Earth’s atmosphere, giving off a flash of light that some refer to as a shooting star. 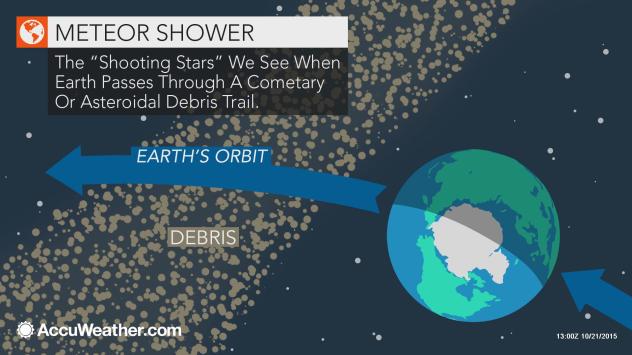 If seen out of the corner of your eye, a meteor may appear to give off a flash of white light, similar to the way stars appear. However, meteors can appear in a variety of colors if viewing conditions are clear or if they are captured in a photograph.

“The color of light that the meteors produce depends on their chemical composition,” AccuWeather Meteorologist Dave Samuhel said.

“Different chemicals in the meteors produce different colors as they burn up while entering the Earth’s atmosphere,” Samuhel said.

For example, meteors made from primarily calcium will give off a purple or violet color, while those made out of magnesium will appear to have a green or teal color. 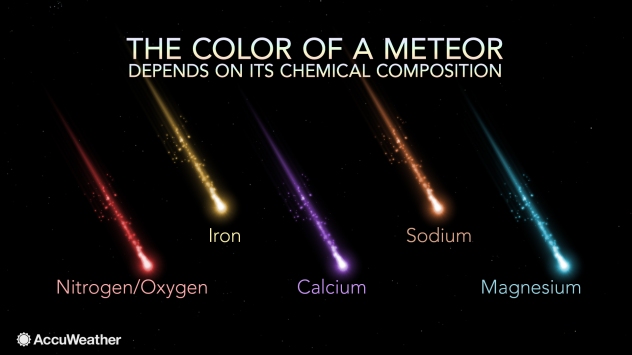 What a meteor is made out of is not the only factor that determines the color that it appears. The speed at which the meteor enters the Earth’s atmosphere can also affect the color.

The faster a meteor moves, the more intense the color may appear, according to the American Meteorological Society (AMS).

“Among fainter objects, it seems to be reported that slow meteors are red or orange, while fast meteors frequently have a blue color,” the AMS said.

The Geminid Meteor Shower, one of the best meteor showers of the year, is a shower known for producing intensely colored meteors, Samuhel said. The Geminids peak in mid-December.

The most common colors for this specific meteor shower are yellow, orange and sometimes green.

The Perseid Meteor Shower, another popular meteor shower that occurs every August, is also known for producing shooting stars that give off vivid colors.