5 planets to align nights after 1st supermoon of the year

June may feature the shortest nights of the year, but there will still be plenty to see after the sun has set -- including clouds that float near the edge of space and the year's first supermoon.

This month of June will feature the first of three supermoons in the year, the seasons changing and five planets meeting for a celestial gathering. Mark these events down on your calendar!

June features the shortest nights of the year across the Northern Hemisphere, but there will still be plenty to see during the abbreviated periods when the sun is below the horizon -- including a rare planetary alignment that won't occur again for decades.

In addition to the celestial events throughout the month, the weeks surrounding the June solstice provide the unique opportunity to spot Earth-bound clouds that cannot be seen during other times of the year.

Noctilucent clouds are the highest clouds in Earth's atmosphere and float around 50 miles above the surface, nearly touching the edge of space which begins at an altitude of 62 miles. This is significantly higher than most other clouds, which develop in the 10 miles closest to the ground. 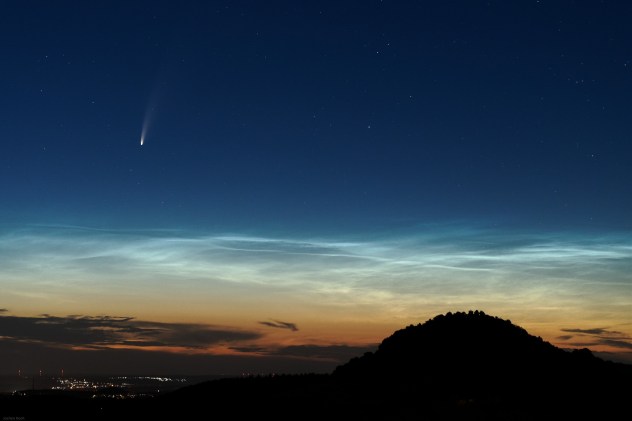 The shimmering noctilucent clouds are seen most frequently in the higher latitudes around the summer solstice due to the angle of the sun before sunrise and after sunset. When conditions are right, they can occasionally be seen across the northern part of the contiguous United States, in places such as Oregon or Michigan.

Here are the top astronomy events to mark on your calendar in June:

The first in a series of supermoons will rise during the middle of the month, the first full moon of its kind in nearly a year.

A supermoon is a full moon that appears slightly bigger and brighter than normal, although the difference between a supermoon and a normal full moon can be imperceptible without a side-by-side picture comparison. The last supermoon to light up the night sky rose on June 24, 2021. 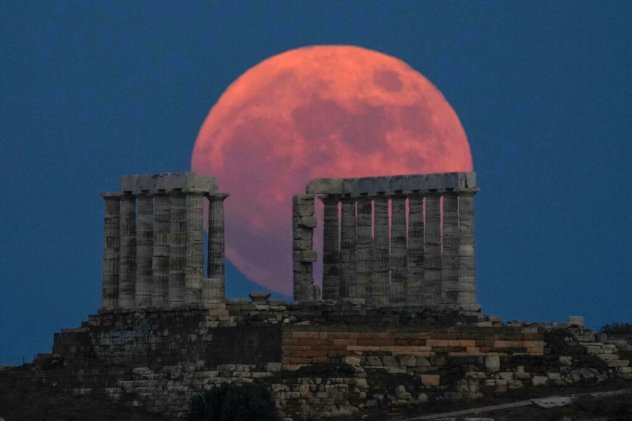 The supermoon that will rise on the night of Monday, June 13, into the morning of Tuesday, June 14, will be the first of three this year. The second supermoon will glow Wednesday, July 13, followed up by 2022's final supermoon Thursday, Aug. 11.

Many areas of the U.S. have experienced at least a preview of summerlike weather, but the true arrival of astronomical summer is right around the corner.

The changing of the seasons will take place on the June solstice, which this year falls on Tuesday, June 21, at 5:13 a.m. EDT. This is different from meteorological summer, which begins on June 1 every year.

After the June solstice has come to pass, the days will slowly become shorter and the nights will gradually grow longer across the Northern Hemisphere until the winter solstice in December.

A unique arrangement of five planets will create an extraordinary display before the end of the month, but only for those who are awake before the crack of dawn.

Mercury, Venus, Mars, Jupiter and Saturn will appear in order in the pre-dawn sky throughout the second half of June. Since this alignment will last for around two weeks, people who want to see the planets in this formation can check the AccuWeather app and choose a morning with a cloud-free forecast to enjoy the celestial show.

Friday, June 24, could be the best morning to view the alignment as the crescent moon will appear to fall in line directly between Venus and Mars. 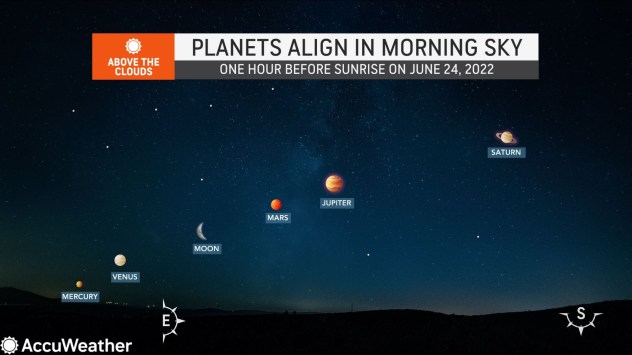 Planets not to scale. The rings of Saturn cannot be seen without a telescope.

The planetary procession will be best seen about an hour before sunrise, which for many means stepping outside well before 5 a.m. local time.

No telescope is required to enjoy this alignment as all five planets can be seen with the naked eye, although Mercury can be tricky to spot as it is the dimmest of all of the planets and will appear very low in the sky.

The next time that Mercury, Venus, Mars, Jupiter and Saturn will appear to align in this order will be in August of 2040.