3 weather obstacles that SpaceX faces when launching rockets into space

When SpaceX prepares to launch a rocket into space, they monitor the weather carefully for days ahead of time to make sure that it does not interfere.

The weather can be one of the most unpredictable factors when it comes to sending rockets into space as launch dates are set weeks or months in advance, too far out for meteorologists to predict exact conditions at the moment of takeoff accurately.

If any aspect of the weather is unfavorable, SpaceX will postpone the launch and wait until the weather improves. In most cases, this means pushing the launch back one or two days. 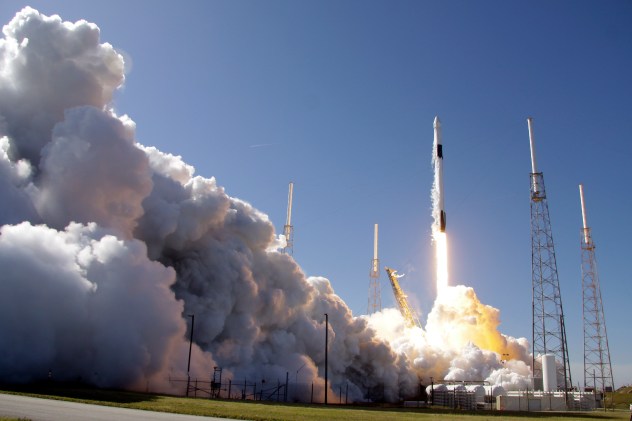 With the payload onboard the rocket costing hundreds of thousands, sometimes millions, of dollars, it is better for the company to err on the side of caution rather than putting the pricey cargo at risk of never making it into space.

Some of the missions into space are routine resupply missions to the International Space Station, delivering food, supply and scientific experiments to the crew in space, while others are to send satellites into orbit.

The missions to the space station can be most affected by weather delays as they often carry perishable food and occasionally live animals, such as mice. If a launch is postponed, scientists on the ground may need to take special care of the animals and switch out the food, while those aboard the space station must wait longer for supplies from Earth.

The Air Force’s 45th Weather Squadron provides the weather forecasts for launches along the East Coast of the United States, which includes Cape Canaveral, Florida. This is the location where a majority of U.S.-based launches occur.

“Weather conditions dictate many of the activities around the launch site, not only the launches themselves,” Steven Siceloff, a blog writer for NASA, said. “For instance, high winds can prevent crews from hoisting a spacecraft onto the top of a rocket. Thunderstorms can stop all activities on the launch pad.”

Here are three different types of weather that can cause SpaceX to scrub their launch.

Thunderstorms can be one of the most dangerous types of weather for rocket launches, especially in Florida where thunderstorms pop up nearly every day in the summer.

Rockets sitting on the launch pad are safe from lightning due to lightning rods around the pad, but after lift off, they are susceptible to being struck.

NASA has eight different launch weather criteria that relate to thunderstorms to ensure that a rocket is safe from lightning throughout its entire launching process.

This includes making sure that there are no thunderstorms or that there have been no lightning strikes within 10 nautical miles of the launch pad in the 30 minutes prior to scheduled launch time.

A lightning strike almost spelled the end to the Apollo 12 mission before it even left the Earth’s atmosphere.

Seconds after liftoff, the moon-bound rocket was struck by lightning, causing warning lights to illuminate and the spacecraft guidance system to lose its altitude reference.

Fortunately, the crew was able to get these systems back online quickly, and the rocket made it to and from the moon safely. However, this strike could have easily spelled an early end to the mission if issues were not able to be resolved in time.

Launch in ~1.5 hours if weather clears. Lightning tower struck earlier, but no effect on rocket or satellite pic.twitter.com/AWdx9LsFZt

Lightning hit one of the lightning towers around a Falcon 9 rocket before a launch scheduled for Sept. 6, 2014.

Even if there is no lightning around the launch pad, any type of precipitation can force a launch to be scrubbed. This usually comes in the form of rain as it is rare for any type of frozen precipitation to fall along the coast of Florida.

Even if it is not raining, a thick layer of clouds could be all it takes for SpaceX to postpone the launch.

Flying through a thin layer of clouds is generally harmless to the rocket, but if the cloud layer is greater than 4,500-feet-thick and extends into freezing temperatures, it can create issues that endanger the rocket’s safety.

Even on a dry day with no rain or thunderstorms nearby, the weather could still cause a launch to be postponed.

High winds near the ground or high up in the atmosphere can force SpaceX to postpone the launch due to possible control problems for the rocket as it speeds into space.

Determining if the winds near the ground are suitable for launch is rather easy. If weather observations near the launch pad reach or exceed 34 mph (30 knots), the launch will be scrubbed.

Determining if the winds higher in the atmosphere are favorable for launch is different than doing so at the ground. Higher up in the atmosphere, the Air Force meteorologists analyze the wind shear, not necessarily the speed of the wind.

Wind shear is the change of wind speed with altitude, and if there is too much wind shear, it can be too much for the rocket to handle.

A launched planned early in March was scrubbed due to high wind shear. SpaceX CEO Elon Musk said that the high shear “hits like a sledgehammer when [the rocket is] going up supersonic.”

Onboard view of landing in high winds pic.twitter.com/FedRzjYYyQ

Even after a successful launch, the weather could still be problematic for SpaceX, particularly when they attempt to land the first stage of their Falcon 9 rocket on a ship floating downrange in the Atlantic Ocean.

Landing these rockets takes extreme precision with the ship being a small target in a vast ocean, so adding factors such as wind, rain or rough seas makes it even more challenging.

However, on April 8, 2016, SpaceX successfully landed the first stage of their Falcon 9 rocket on their ship downrange for the first time. This was the first of many successful sea-based landings.