May to bring 1st total lunar eclipse since 2019

The month kicks off with shooting stars and wraps up with an eclipse. Mark the following astronomy events down on your May calendar.

One of the biggest astronomical happenings of 2021 is set to take place near the end of the new month, but onlookers will need to be in the right place and have perfect weather to see it for themselves.

May’s milder nights will be more comfortable for stargazing of all types, whether it's hours under the heavens for a meteor shower or for just a few minutes to spot the International Space Station flying overhead.

As temperatures across the Northern Hemisphere rise, areas in the Southern Hemisphere will start to cool down. The nights in May will not only be a bit chilly and longer for areas south of the equator, but they will also boast the hemisphere’s best meteor shower of the entire year.

Here are the top three astronomy events to look for in May:

The best meteor shower of the entire year for the Southern Hemisphere will reach its peak during the first week of May, outperforming every other annual meteor shower that is viewed from south of the equator.

Between 40 and 60 meteors per hour can be counted in the night sky over the Southern Hemisphere on the night of May 4 into the early morning of May 5, and like many other meteor showers, is best viewed after midnight local time.

People in the Northern Hemisphere can still enjoy part of the celestial light show, but the Eta Aquarids will not be as impressive when compared to areas farther south. Rates typically peak between 10 and 30 meteors per hour, about on par with the recent Lyrid meteor shower.

If cloudy conditions prevail on the night that the Eta Aquarids peak, people will have a few more nights to spot shooting stars. “Activity is good for a week centered [around] the night of maximum activity,” the American Meteor Society said on its website.

After the Eta Aquarids come and go, the next moderate meteor shower will not peak until the last week of July.

Mercury is the smallest and most difficult planet to spot without a telescope, often being lost in the sunlight due to its proximity to the sun. However, in the middle of the month it will be rather easy to find just after sunset.

May will be the best month of 2021 to see Mercury, EarthSky said, especially for the Northern Hemisphere around the middle of the month.

The evening of Thursday, May 13, will be the best opportunity to look for the small, dim planet as it will appear right next to the thin crescent moon in the western sky. A clear sky and a clear view of the western horizon is needed to see Mercury as it will be very low in the sky and will set about an hour and a half after sunset. 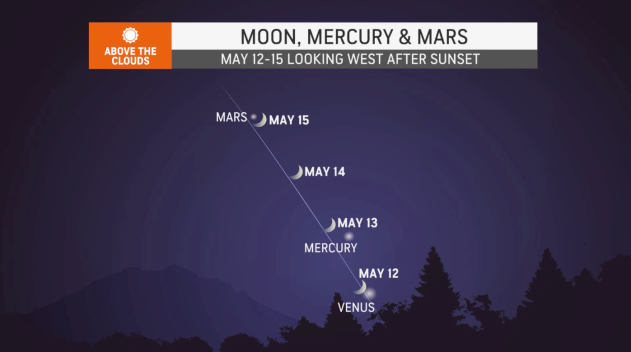 The moon will serve as an easy-to-find reference point to locate the dim planet Mercury on May 13, 2021. (AccuWeather)

Saturday, May 15, will feature another astronomical meet-up as the moon swings past Mars in the western sky.

Mercury will remain visible in the evening sky until later in May, although it could be tricky to spot without the moon nearby serving as a reference point.

3. Total Lunar Eclipse
When: May 26 before sunrise

The biggest astronomical event of the month is also one of the biggest of the entire year for North America as the sun, Earth and moon align to create a total lunar eclipse just before daybreak on May 26.

This will be the first total lunar eclipse visible from the contiguous United States since Jan. 20-21, 2019.

However, unlike that eclipse, the total phase of this month’s eclipse will only be visible from the Rocky Mountains or West Coast. The eastern half of the U.S and most of Canada will be able to see a partial lunar eclipse, but the moon will set in the west before the total phase begins.

Skywatchers across the western U.S. that wake up early and find themselves under a cloud-free sky will be able to see the moon turn red or rusty orange in color during the height of the total lunar eclipse. This color is why some refer to this event as a "blood moon." 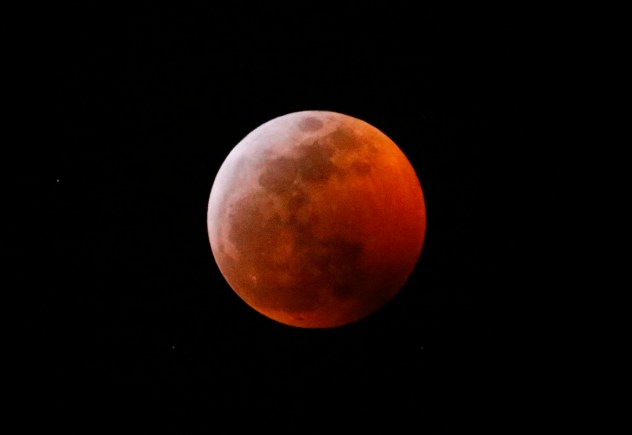 An encore of the lunar eclipse is set to take center stage in the sky on the night of Nov. 18-19, 2021. This will fall just short of being a total lunar eclipse with 97% of the moon passing through Earth’s dark inner shadow.

All of North America will be able to see this impressive partial lunar eclipse according to NASA, as well as parts of South America, New Zealand, Australia and eastern Asia.