Tonight: Jupiter will appear at its brightest in 2021

Stargazers who enjoyed the Saturn Opposition at the beginning of the month will enjoy the Jupiter Opposition when the solar system's largest planet will appear at its brightest.

The largest planet in the solar system will take center stage in the night sky this week as it appears brighter than any other point in 2021, making it a great opportunity to spot the planet — with or without a telescope.

Stargazers that spent time outside last week to watch the Perseid meteor shower likely saw Jupiter as it was the brightest object in the sky after the moon set during the first part of the night.

This week, Jupiter will appear slightly brighter as it reaches opposition.

Opposition is an astronomical term meaning that Jupiter will appear opposite of the sun from the perspective of the Earth. This is also around the time when the two planets will be at their closest, meaning that it is the best time of the year to observe the planet. 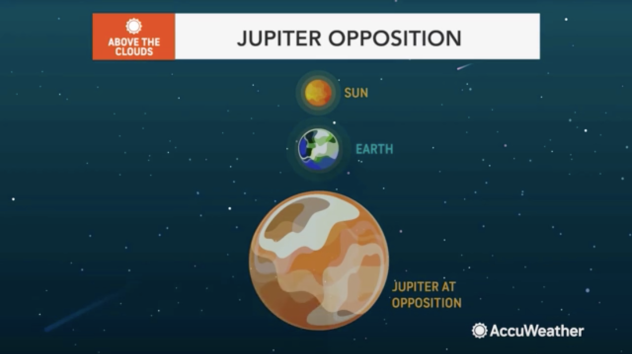 Jupiter will officially reach opposition Thursday, Aug. 19, but it is not just a one-night event.

The planet will remain vibrant in the sky throughout the rest of August, so if cloudy conditions prevail Thursday night, onlookers can step outside over the weekend or any time in the next few weeks for a great view of Jupiter.

Jupiter will be easy to spot throughout the entire night with it rising in the southeast shortly after sunset, slowly tracking across the southern sky as the night transpires and eventually setting in the southwest by sunrise.

Saturn will also be in the neighborhood, although it will not appear quite as bright as Jupiter.

To find Saturn, it is helpful to first, locate Jupiter in the sky and then look off to the right about the distance of a hand stretched out at arm’s length.

Although no telescope is required to see the largest planet in the solar system, the Jupiter opposition is a great opportunity for people to dig their telescope out of the closet or to use a new telescope for the very first time.

Since it is already visible to the unaided eye, Jupiter is easy to find with a telescope. Plus, most telescopes are powerful enough to reveal its four largest moons: Europa, Io, Ganymede and Callisto.

These four moons are often called the Galilean moons as they were first observed by Galileo in the early 1600s. 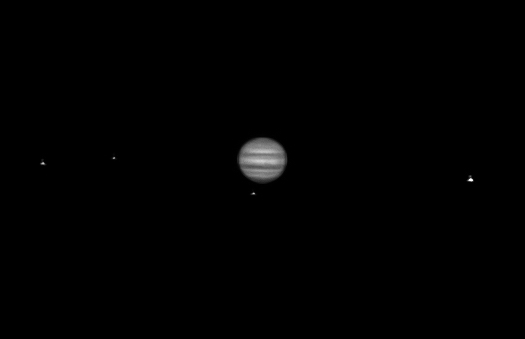 The four specks of light around Jupiter are the Galilean moons. (Image/Stephen Rahn)

These moons orbit Jupiter much faster than the moon that orbits the Earth. Observers can see the moons change position over the span of just a few hours as they zip about the large planet.

Bigger telescopes with more magnifying power can reveal greater details about Jupiter, including its colorful bands of clouds and even the famous Great Red Spot.

The planet will not appear this bright again for another 13 months when it reaches opposition again on Sept. 26, 2022

However, stargazers will continue to see Jupiter featured in the evening sky, alongside of Saturn, throughout the balance of 2021 with the planets gradually becoming dimmer as the end of the year draws near.