The 'most popular meteor shower of 2020' peaks tonight

The Perseids, one of the best meteor showers of the year, peaks on Aug. 11-12, boasting between 50-75 meteors per hour. Be sure to mark this on your calendar.

The wait is over.

“The Perseids are the most popular meteor shower as they peak on warm August nights as seen from the northern hemisphere,” the American Meteor Society (AMS) explained on its website.

This year, spectators across the Northern Hemisphere can expect to see between 50 and 75 meteors an hour under dark skies, which averages about one meteor every minute. Areas south of the equator will still be able to see some of the Perseids, but the hourly rates will be lower.

“The Geminid meteor shower in December produces about the same number of meteors. Both showers produce about four times more than any other shower during the year typically does,” AccuWeather Astronomy Blogger Dave Samuhel said.

One big difference between the Perseids and the Geminids is the weather.

August typically features more comfortable stargazing weather for the Perseids compared to December’s cold and often cloudy conditions around the peak of the Geminids.

Where and when to look

As with every meteor shower, the best time to look is when the shower’s radiant point is highest in the sky. The number of meteors able to be seen will gradually increase as the radiant point moves higher in the sky.

“They are called Perseids since the radiant (the area of the sky where the meteors seem to originate) is located near the prominent constellation of Perseus,” the AMS explained.

Contrary to popular belief, skywatchers do not need to look at radiant point to see the meteor shower -- shooting stars will be visible streaking across all areas of the sky. 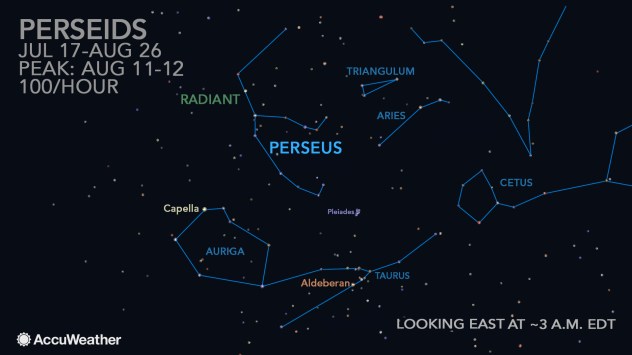 Because of this, the best window for viewing this year’s Perseid meteor shower will occur between 11 p.m. and 1 a.m. local time.

“Even though the Perseids will be most active after midnight, I encourage people to start looking once it gets dark in the evening,” Samuhel said.

“You will be more likely to see a long-lived, bright meteor fly across a large portion of the sky during the evening.” 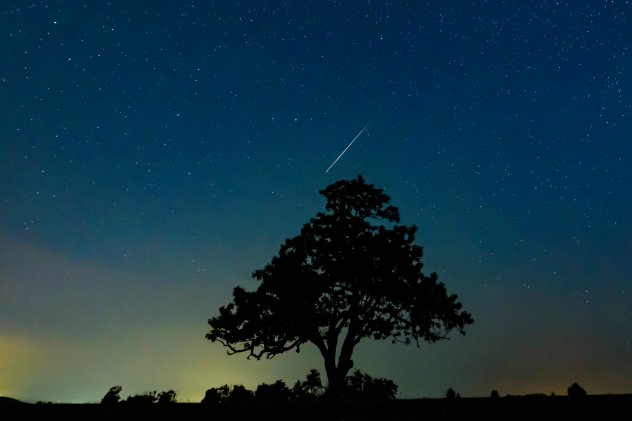 A meteorite of the swarm of meteorites Perseida illuminate at the sky above Salgotarjan, Hungary, early Tuesday, Aug. 13, 2019. The Perseid meteor shower occurs every year in August when the Earth passes through debris and dust of the Swift-Tuttle comet. (Peter Komka/MTI via AP)

Onlookers staying out after 1 a.m. to watch the celestial light show should look to the darkest part of the sky away from the moon.

This year, most of the western and central United States will have cloud-free conditions for the peak of the Perseids. Favorable weather is also in the forecast for much of western Canada and the Canadian Prairies.

Folks east of the Mississippi River may have some clouds to contend with, especially across the Ohio Valley to the coast of the mid-Atlantic.

Other areas, such as the Deep South, northern New England and into the St. Lawrence River Valley will have some breaks in the clouds which could provide opportunities to spot a few shooting stars throughout the night. 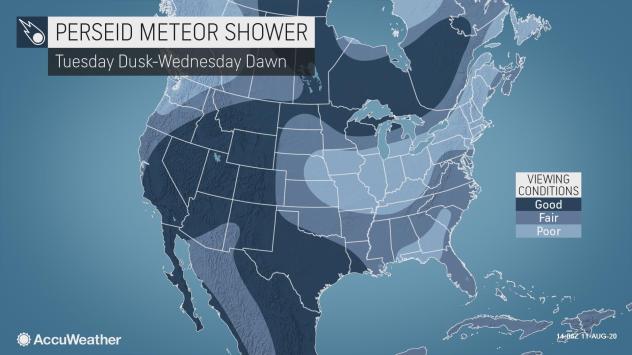 Meteors will continue to be visible in the nights following the peak, so those that find themselves under clouds on Tuesday night should plan for a night under the stars later in the week when weather conditions improve. However, the number of meteors visible will gradually decrease each night.

In addition to needing clear weather, a little patience is also required for watching the Perseids.

“Dedicate a solid hour to doing nothing but looking for meteors,” Samuhel said. “If you look for only a few minutes, you might not see any.”

It is important not to look at any source of light while out looking for shooting stars; this includes cellphone screens.

“Make yourself comfortable. Lay back on a lounge chair or a blanket on the grass. Don’t sit in a normal chair and look up; your neck will quickly get tired,” Samuhel said.

After the Perseids pass, the next moderate meteor shower will not occur until mid-October with the peak of the Orionids.