One person was confirmed dead and a number were “unaccounted for” following the eruption of a volcano on White Island in New Zealand on Dec. 9.

Officials confirmed that six people have died as a result of the disaster on White Island, also known as Whakaari, which sits about 30 miles (48 km) offshore from mainland New Zealand in the Bay of Plenty.

After conducting inquiries with tour operators, New Zealand Police said 47 people were on the island when the volcano rumbled to life Monday afternoon, spewing steam and ash thousands of feet into the air. Thirty-one people were evacuated from the island and were taken to seven hospitals around the country. Several victims have reportedly suffered severe burns. 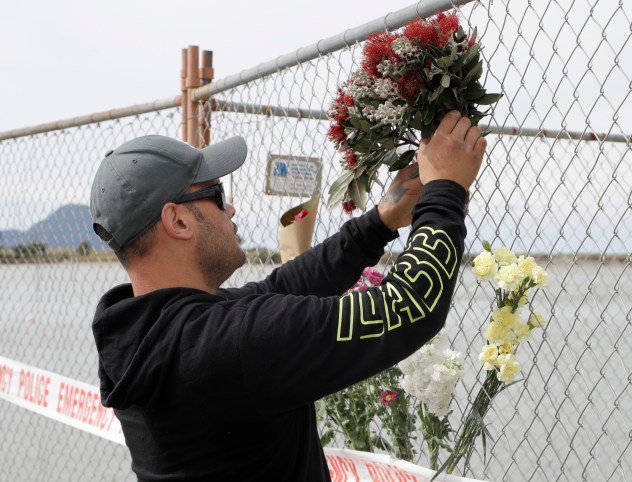 A man places a bouquet to a fence on the waterfront in Whakatane, New Zealand, Tuesday, Dec. 10, 2019. (AP Photo/Mark Baker)

Three survivors have already been treated and discharged from Whakatane Hospital.

The New Zealand Police, along with Fire and Emergency New Zealand, the country's top firefighting and emergency services organization, were working to determine conditions on the island, including gas levels in the atmosphere.

The police said they were consulting with experts from GNS Science, a research institute that specializes in Earth and geoscience research, to focus on the requirements emergency responders going on the island will need, and the care and transportation of the victims' bodies when they are recovered.

"Based on the effects of the eruption on the bodies, this recovery will need to be handled with expert skill and care," police officials said in a statement.

Windy conditions on Tuesday meant officials could not launch drones to survey the area, but as soon as conditions permit they will be deployed, the police said.

Mourners in Whakatane flocked to the waterfront Tuesday to leave flowers and messages in memory of the deceased.

“I know that there will be a huge amount of anxiety for those who had loved ones on the island at the time,” Arden said. “We don’t have full clarity at this point and you’ll understand why we’re loath to get into speculation.” 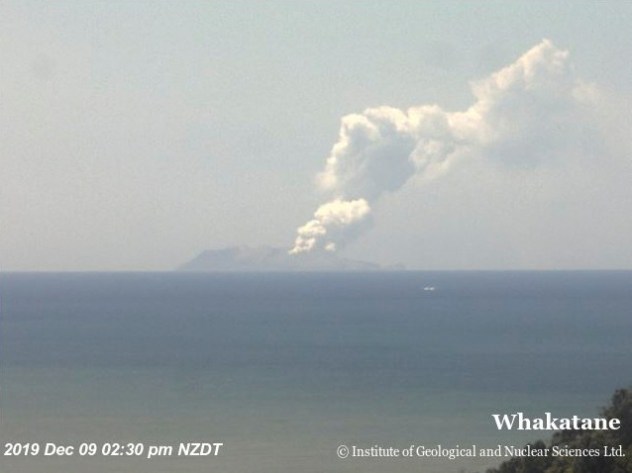 Smoke bellows from Whakaari, also known as White Island, volcano as it erupts in New Zealand, Dec. 9, 2019, in this image obtained via social media. (GNS Science via REUTERS)

Search and rescue efforts were stalled Monday evening with authorities deeming the island too dangerous.

"I say to those who have lost and grieve – you are forever linked to our nation and we will hold you close," Ardena said while addressing Parliament on Tuesday. She also addressed the families in Australia, where many of the victims were visiting from. "Our family in Australia has been heavily impacted. We feel the pull of our bond acutely at this time."

Ardena went on to thank the 'tireless' emergency responders who worked through the night to treat survivors.

"The physical environment is unsafe for us to return to the island," Tims said at Monday's press conference. "It's important that we consider the health and safety of rescuers, so we're taking advice from experts going forward."

However, shortly after midnight Tuesday local time, the police issued an update where they said they do not believe there are any survivors on the island and were working to confirm the exact number of those that died, in addition to the six fatalities already confirmed.

According to police reports, anyone found alive on the island was evacuated.

A number of aerial reconnaissance flights over the island allowed the police to determine that there were no remaining survivors.

"No signs of life have been seen at any point," the police said.

Michael Schade, a tourist on the island around the time of the eruption, said on Twitter he was near the main crater about 30 minutes before the incident occurred. He said the boat ride home was "indescribable" as injured tourists were being tended to and massive plumes of ash billowed nearby.

"My thoughts are with the families of those currently unaccounted for, the people recovering now and especially the rescue workers," Schade wrote.

More than 30 of those touring the island at the time of the explosion are believed to be guests of the Royal Caribbean International ship "Ovation of the Seas."

"We are devastated by today’s events and our hearts go out to all those affected by this tragedy," the cruise line told CNN. "We are working together with local authorities, and we are providing all the help and care we can to our guests and their families, including offering medical resources and counseling. We are also sending staff members from both our ship and our Sydney and Auckland offices to assist family members however possible. Ovation of the Seas will remain in port as long as needed to assist with the situation."

Satellite images captured the huge plume of smoke and ash that spewed into the sky during the eruption.

A deadly eruption of the #WhiteIslandVolcano on Dec. 9, 2019 off of #NewZealand in the #BayofPlenty could be seen by the #GOESWest satellite from more than 22,000 miles up.
Learn more: https://t.co/edzgIgVjpc pic.twitter.com/2NApJNH6Tw

The New Zealand Civil Defense encouraged people living in or near the affected ash fall areas to consider staying indoors, closing windows and doors to limit the entry of volcanic ash and wearing a handkerchief or dust mask over the nose and mouth.

Dry and sunny weather was present at the time of the incident and that is expected to continue into midweek as officials continue their recovery efforts.

"Largely dry weather is expected across the island and surrounding waters through Wednesday," said AccuWeather Senior Meteorologist Eric Leister. "Winds out of the south to southeast into Wednesday will take any additional ash plumes away from land."

GeoNet, the government earthquake agency, said in a statement that the eruption was "short-lived" and generated an ash plume 12,000 feet into the sky. 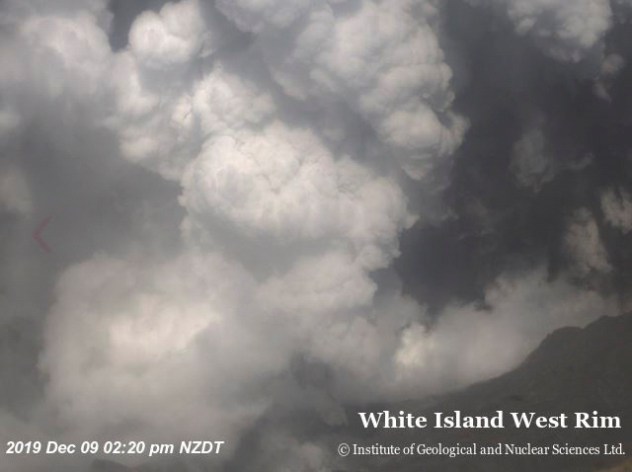 An aerial view shows smoke billowing above the crater of Whakaari, also known as White Island, volcano as it erupts in New Zealand, Dec. 9, 2019, in this image obtained via social media. GNS Science via REUTERS

"Ash fall appears to be confined to the island and we do not expect more than a minor amount of ash to reach East Cape in the coming hours," GeoNet said. "We are aware that people were on the island immediately before the eruption and we express our concern for their safety."

GeoNet suspended their webcams on the volcano and removed the images of the moments leading up to and during the eruption from their website while search and rescue efforts are underway.

"Our sympathies are with those families affected by the Whakaari/White Island eruption," the company said in a statement on their website.

White Island is known to be New Zealand's most active cone volcano, according to the agency. Prior to the eruption, scientists had noticed a recent uptick in volcanic activity on the island, according to The Associated Press.

On Nov. 18, GeoNet raised the Volcanic Alert Level on White Island from one to two following an uptick in sulfur dioxide gas, according to the AP. The agency also reported an increase in the strength of volcanic tremors in the weeks prior.

Thanksgiving storm resurfaces a mystery from the depths of Lake Michigan
Stunning images show how severe drought has changed one of the world’s largest waterfalls
42,000-year-old specimen believed to be ‘best preserved Ice Age animal ever found in the world’
Report a Typo
Comments that don't add to the conversation may be automatically or manually removed by Facebook or AccuWeather. Profanity, personal attacks, and spam will not be tolerated.
Comments
Hide Comments