Some areas of Southern California could experience wind gusts up to 100 mph.

An unusual combination of weather systems will result in a one-two punch of wind events that will buffet much of California, including the Los Angeles region, which is typically sheltered from the notorious Santa Ana winds that frequently howl across the southern portion of the state.

In some extreme circumstances, AccuWeather forecasters are warning that winds could reach 120 mph which is the equivalent of a Category 3 hurricane. Meanwhile, persistent winds that are less potent but still dangerous will howl across much of the Golden State and result in an elevated to extreme wildfire risk into the middle of the week. Due to the high fire danger, utility companies could institute preemptive power shutoffs.

Some weather instruments located on the peaks of the Sierra Nevada have already registered gusts ranging from 100 to 190 mph as of early Tuesday morning.

Strong winds continued throughout the day on Tuesday, although top speeds were slightly lower. 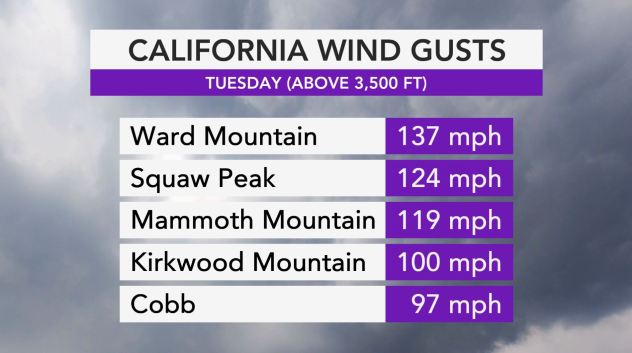 "At the top of Kirkwood Mountain, California, at an elevation of 9,186 feet, a gust of 188 mph was recorded during Monday night," AccuWeather Meteorologist Jesse Ferrell said. The California state record of 199 mph occurred on top of Ward Mountain in 2017.

Winds were howling in Fontana, California, as AccuWeather National Weather Reporter Bill Wadell gave a live update on the windy conditions for the AccuWeather Network Tuesday morning. Wadell spoke with California Department of Forestry and Fire Protection Captain Richard Cordova, who said that 95% of all wildland fires are “human-caused."

“That’s where our residents of California need to understand that when they go out, they need to be cautious of their surroundings,” Cordova said, adding that any little spark can ignite a wildfire.

Wadell later captured a photo of a tractor-trailer that had been blown over near Fontana by the fierce winds.

Reports coming in of trucks flipped over by powerful winds in #SoCal. This semi tipped over on a ramp near I-15 and 210 in Fontana, #California. #cawx #SantaAnaWinds @breakingweather pic.twitter.com/QCvE6AVUYe

The windy weather setup is being caused in part by a typical high pressure area that builds across the interior West and a not-so-common strong storm spinning to the southwest of Southern California over the Pacific Ocean. Normally, the flow of air out from the high pressure system over the interior would be enough to generate Santa Ana winds. However, in this case, the winds are being drawn southwestward toward the storm, which is currently a strong area of low pressure offshore.

In the atmosphere, air flows from high to low pressure. The setup into Wednesday is like having two giant atmospheric fans working as a team with one pulling and the other pushing the air in the same direction.

Normally, mountains to the north and east of Los Angeles would protect the downtown which sits in a basin. However, with the assistance of the offshore storm, there will be areas of gusty winds even in the L.A. Basin. The winds may get strong enough in parts of the basin to break tree limbs and lead to sporadic power outages and sparks that could ignite fires.

"Typically, Santa Ana winds stay out of downtown Los Angeles and the L.A. Basin, but this time, conditions may set up just right to bring 30- to 40-mph wind gusts even in those typically calm condition areas," said AccuWeather Senior Meteorologist Mike Doll.

Outside of the Los Angeles region, winds are forecast to be significantly stronger.

"The strongest winds are expected throughout the Sierra Nevada as well as in the Transverse Ranges of Southern California," said AccuWeather Meteorologist Jake Sojda. 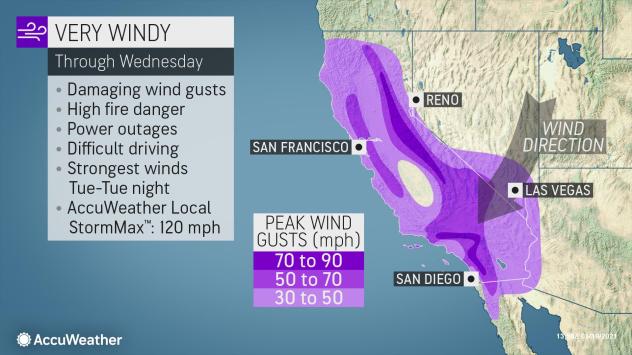 "In these areas, wind gusts of 70 to 90 mph are anticipated, with an AccuWeather Local StormMax™ of 120 mph," Sojda continued.

Wind gusts around 50 mph were reported in San Francisco on Monday night, with gusts to 70 mph in the higher terrain.

High winds can rip through canyons that are aligned in a southwest to northeast fashion. Coastal areas on land and sea are forecast to experience strong winds as well. Small craft should remain in port until winds are forecast to ease at midweek.

High wind warnings and wind advisories are in effect for parts of California. The National Weather Service warned that conditions will be "favorable for extreme fire behavior which would threaten life and property" and added that people should use "extreme caution" with any sources that could lead to fire ignition. Parking cars over dry brush, for instance, or using outdoor power equipment and outdoor grills could spark fires.

Utility companies may be forced to cut power as a precaution to avoid downed power lines sparking blazes. Southern California Edison has reported that over 288,000 customers in the Los Angeles area could see their power cut as a safety precaution during the storm.

Temperatures are forecast to fluctuate during through the middle of the week, but the pattern will not bring heat that is sometimes associated with a Santa Ana wind event. Instead, cooler air is expected.

Following warmth on Monday with highs within a few degrees of 80 F in many low-elevation locations of Southern California and record-breaking temperatures in northern areas, including in San Francisco, temperatures are forecast to trend downward by the middle and latter parts of the week. By Wednesday, highs are forecast to be in the lower 60s in San Francisco, and by Thursday, temperatures are projected to peak near 70 in Los Angeles.

The storm is expected to start pumping moisture into the Southwest, but while some spotty shower activity is in store for part of Southern California by midweek and more general rain and high-elevation snow is likely to spread over the interior southwestern United States, little rain is expected to reach Los Angeles, and no rain is forecast for San Francisco through midweek. 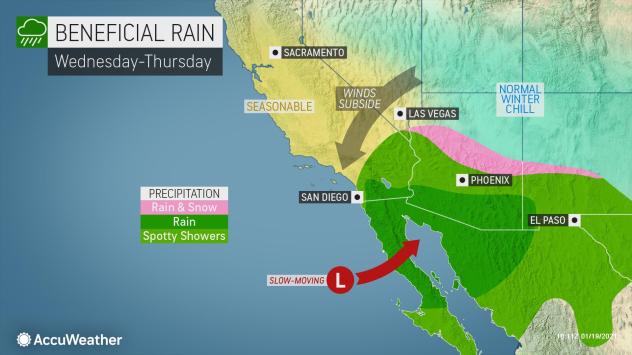 However, there is some hope for rain in much of California before the end of January.

The storm off the coast of Southern California and northwestern Mexico is marking a change in the weather pattern that will favor some periodic precipitation along the West Coast states during the latter part of the month.

Beneficial rain, snow to return to Southwest this week
Could 'cedar fever' be behind your runny nose this winter?
More snow falls across hard-hit areas of Japan

One storm is projected to drop southward late this week and has the potential to bring at least low-elevation rain showers and high-elevation snow showers to much of California. One to three additional storms may behave in a similar manner every two to four days through the end of the month. Even though the intensity of the storms is questionable and the amount of rain and snow they will bring is somewhat uncertain at this point, there will at least be opportunities for precipitation, which have been rare thus far this winter. 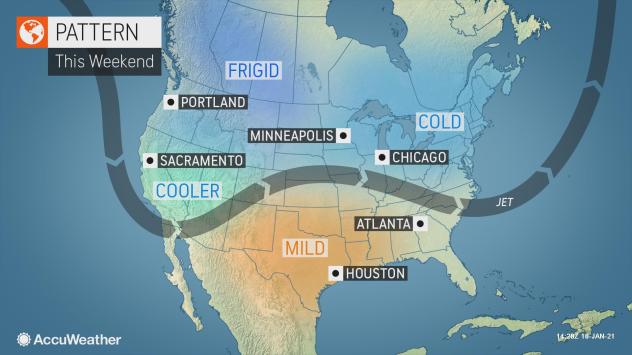 The pattern will help lower temperatures in the region and is likely to produce lower-than-average temperatures for the latter part of January over the interior Southwest.