Wide stretch of southern US on alert for severe weather outbreak

A large area of the South will be at risk for flooding as the storms produce areas of intense rainfall.

Americans across the southern United States are next in line for the threat of another outbreak of damaging storms heading into the weekend. AccuWeather meteorologists warn that people living in states from Texas to Georgia could be at risk for severe weather from late Friday night through Saturday night as a storm system progresses eastward.

Seven preliminary tornadoes were reported with the storms that erupted on Wednesday and Wednesday night, four of which occurred in Louisiana and caused damage to homes, according to the National Weather Service Storm Prediction Center (SPC). Dozens of incidents of damaging wind gusts, along with a few incidents of hail, stretched from eastern Texas northward to southern Wisconsin.

On the southwestern side of Cedar Rapids, Iowa, a tornado caused damage to homes and at least one injury. According to the NWS, the tornado was given a preliminary rating of EF0 and had wind speeds as high as 85 mph.

An EF0 tornado with maximum winds of 75 mph touched down briefly in Hancock County, Mississippi, moving northeastward and creating a .7 mile-long path with a width of 50 yards.

Remnants of the storms from Wednesday night pushed through the Interstate 10 and 20 corridors of Louisiana, Mississippi, Alabama, and the Florida Panhandle on Thursday morning.

As storms rolled through the New Orleans area early Thursday, a tornado warning was issued due to some indication of rotation on radar. While no tornado was confirmed, storms dumped between 2.40 and 2.70 inches of rain on the Big Easy in four hours. 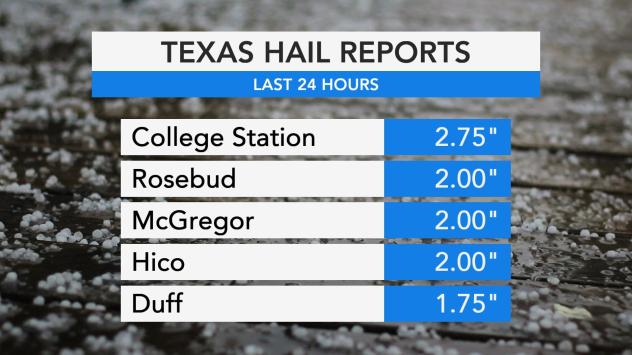 By Thursday night, storms with big hail erupted over portions of central and eastern Texas, causing significant damage to vehicles. Hail as large as baseballs was reported in College Station.

Many of these same areas will be in the crosshairs of a new round of severe weather for the end of the week. 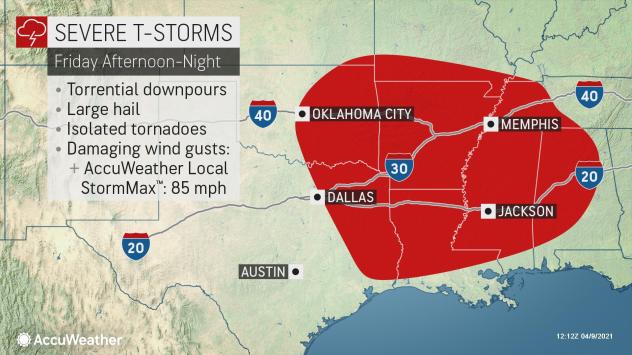 Areas extending from the southern Appalachians to the central Gulf coast are at risk for severe weather, according to AccuWeather Senior Storm Warning Meteorologist Eddie Walker.

The main threats from these storms in addition to flooding downpours are likely to be damaging wind gusts and hail.

The storms are expected to erupt near the edge of a zone of very warm air that could lead to some daily record highs being challenged in Texas on Friday. Temperatures are projected to climb into the 80s and 90s F over a broad area of Texas. A few locations, such as San Antonio, may come within a few degrees of 100 F.

"There is the potential for a derecho event during Friday night from parts of northeastern Texas and eastern Oklahoma to portions of Louisiana and Arkansas,” AccuWeather Lead Storm-Warning Meteorologist William Clark said. Should a derecho unfold, its path may eventually take it through Mississippi and Alabama early Saturday morning.

A derecho is a swift-moving complex of thunderstorms that produces extensive wind damage over hundreds of miles.

"With a fresh influx of Gulf of Mexico moisture in the form of humid air, combined with wind energy at the middle layer of the atmosphere associated with the approaching disturbance, the ingredients are there for severe weather from late Friday through Saturday," AccuWeather Senior On-Air Meteorologist Justin Povick said.

The coverage and intensity of severe weather may hinge on the amount of sunshine available.

"Part of the atmospheric environment on Friday and Saturday may be strewn with clouds that limit daytime heating in part of the area at risk for severe weather, but where the sun breaks out, tall storms can erupt and pack a punch," AccuWeather Chief On-Air Meteorologist Bernie Rayno said.

The main batch of severe weather is forecast to erupt in the central and eastern portions of Texas and Oklahoma during late Friday afternoon and evening and progress eastward into parts of Arkansas, Louisiana, Mississippi, Alabama and western Tennessee on Friday night.

All forms of severe weather are possible on Friday night. The storms have the potential to produce damaging wind gusts, large hail, frequent lightning strikes and isolated tornadoes. 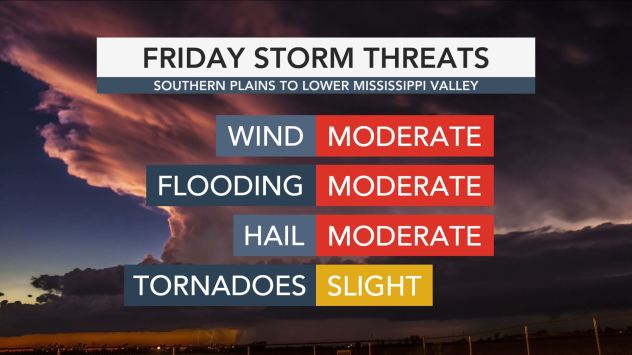 While a large number of tornadoes does not appear likely at this stage for Friday night, the potential for tornadoes to occur after dark will pose an added risk. The storms will be much more difficult to see and could occur after some people have gone to bed.

With any severe weather threat, the AccuWeather app can greatly help with timing of storms and be a source for receiving the latest severe weather watches and warnings as they are issued.

The storms from late Friday are likely to continue to pack a punch in terms of downpours and damaging winds as they charge through portions of Alabama, the western Florida Panhandle, southern Mississippi and southeastern Louisiana during the morning hours of Saturday.

Damaging storms may reach Georgia and central portions of the Florida Panhandle by the afternoon before moving offshore. 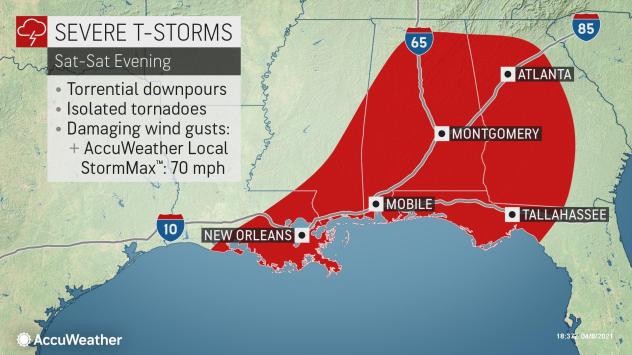 It is possible that locally heavy to severe storms bubble up as far north as the Ohio Valley on Saturday afternoon, provided there is enough sunshine to heat up the ground earlier in the day.

Thunderstorms are possible each day from Friday to Sunday at Augusta National Golf Club, Georgia, and the site of The Masters tournament. One concentrated pulse of thunderstorms is possible in the area during Friday night.

The greatest potential for severe weather at the course is on Saturday afternoon and evening, but any thunderstorm can produce dangerous lightning strikes.

There is the chance that severe weather continues on Sunday but across areas farther to the north and east. At the very least, showers and thunderstorms are forecast to ignite from the Florida Peninsula to the Carolinas and parts of the Northeast.

"The key to any severe thunderstorms in the mid-Atlantic and central Appalachians on Sunday will be how quickly sunshine breaks out and warms the region up following a wet start," AccuWeather Forecasting Manager Dan DePodwin said.

Much of the southern U.S. has had a week of quiet weather in terms of severe storms. Prior to Wednesday, April 7, the last general severe weather day was on Wednesday, March 31, when there were nearly three dozen reports of damaging winds, a handful of reports of large hail from Mississippi to Virginia, according to SPC. The severe weather included one tornado that was rated as an EF0 in Hayden, Alabama.

March was a very busy month in terms of severe weather in the South with hundreds of incidents of damaging storms that included dozens of tornadoes. Some of the tornadoes were strong, devastating and deadly, including a single tornado that killed five people in Calhoun County, Alabama, on March 25.