Multiple homes in a neighborhood in Shoal Creek, Alabama, were in pieces on March 25 after a tornado tore through the area.

One of the worst aspects of covering severe weather as an on-air meteorologist became a reality on Thursday, March 25, as one forecaster covered a tornado-warned storm tracking over his home.

James Spann, the chief meteorologist at ABC 33/40 in Birmingham, Alabama, was in wall-to-wall coverage on the last Thursday of March tracking the path of a long-track tornado in northern Alabama.

Spann is well-known and trusted in Alabama for his tireless coverage of severe weather events, which has also gained him national attention. One such event was the Super Outbreak of April 2011 where Spann spent 10 consecutive hours in front of the camera out of the 18 hours ABC 33/40 covered the event. 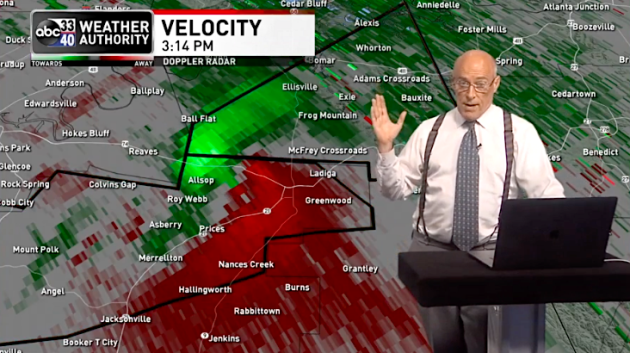 While Spann's marathon television broadcast almost certainly saved lives that day, he said he wasn't ready to celebrate that in an interview with AccuWeather in 2019.

“You know these [events] happen about every 40 years, but like I always say, all it takes is one. If there’s one tornado and it comes down your street, that’s your April 27th, so I think the lessons we learn will help us be better for the future.”

In the hours of Spann's severe weather coverage on March 25, there came a moment he had to briefly step off camera.

"The reason I had to step out, we had major damage at my house," Spann said upon returning to the broadcast a few minutes later. "My wife is OK, but the tornado came right through there and it's not good, it's bad. It's bad."

Knowing the tornado had tracked over his neighborhood and anticipating damage, the newsroom called Spann's wife after the storm had passed, ABC 33/40 shared.

While on the phone, she confirmed their fears, stating there was damage everywhere as she walked through the home and looked out the windows.

"Oh, it's a miracle," she reportedly said, "A huge tree just missed our house!"

The newsroom alerted Spann that his wife was unharmed, and after tossing the coverage over to meteorologist Taylor Sarallo, he was able to step away and call his wife.

Had a scare today. As I often say, tornadoes happen to real people, at a real place, at a real time. pic.twitter.com/uoGxcKAJZE

Spann later released a statement that his wife was in the home when it was hit by the tornado, but she was safe because she was in their in-home shelter.

"While we lost many trees, the home is intact and we will not have to 'rebuild,'" Spann said. "Please consider helping others across the state who have much more serious damage."

A GoFundMe page that was initially aimed at raising money to help Spann -- started by one of the legendary meteorologist's fans -- was later updated to raise money for all of the Alabama tornado victims.

Crystal Stuckey and her son, Drake, were watching James Spann's severe weather coverage in their home in Brent, Alabama, and decided to go to the public shelter to hunker down, she said in an interview with AccuWeather National Reporter Bill Wadell.

When Crystal and Drake went home they realized they were lucky. Trees were blocking their driveway, but their house only suffered minor damage.

‘Everything caved in on us’: Couple’s home collapses on them amid Alabama tornado outbreak Scientists were first who dared to forecast ‘an act of God’ AccuWeather’s 2021 Atlantic hurricane season forecast 2021 predicted to yield more tornadoes than 2020. Here’s why

Support and appreciation for Spann's calm demeanor and dedication to keeping his viewers informed after knowing he had been personally affected by the storms poured out on Twitter from locals as well as meteorologists across the nation.

Several chief meteorologists shared that tracking severe weather near their homes while broadcasting is one of the worst parts of the job and can even be their worst fear.

Watching @Spann's tornado coverage in Alabama and one of my worst fears happened to him. He said his house was hit and sustained major damage. His wife, who was home, is ok. Reports of major damage near Birmingham. pic.twitter.com/MVhjZD83ni

Wadell, who is based in Dallas, also knows the feeling of covering severe weather in the field while storms are headed toward his fiancée, family or friends.

While out reporting on major weather events, Wadell often finds himself "in the zone," working to share pivotal information, photos and videos wide a wide audience. He also makes sure he is in the right location at the right time in order to find people to interview.

"One of the only distractions that can zap me out of the zone is worrying if my loved ones or friends are in danger," said Wadell. "Your heart sinks when you can’t get in touch with your family or friends right away."

AccuWeather On-Air Meteorologist Geoff Cornish covered frequent rounds of severe weather when he worked in Lexington, Kentucky, and Joplin, Missouri. When working during severe weather outbreaks, he would always try to text his wife updates as she took shelter with friends in their community.

"It is always unsettling when you have the responsibility to be on the air, but you also have concern for loved ones in the path of a threatening storm," said Cornish. 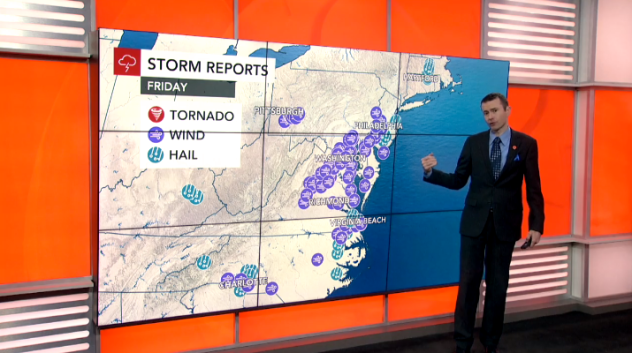 Both Cornish and Wadell are thankful for the ability to send quick texts as well as automatic weather alerts that can warn their friends and family about severe weather when they're covering serious weather threats.

"Text messaging is great in these moments, and also knowing your friends or family members may be watching the broadcast is somewhat of a comfort," said Cornish.

Melissa Constanzer, on-air meteorologist for AccuWeather, explained her own close call with severe weather while working at a station in Mobile, Alabama. While she didn't have friends and family that were in jeopardy, the studio where she was working with three other colleagues was in the path of the storm.

Four meteorologists were in wall-to-wall coverage for several storms moving through Alabama, Constanzer explained, adding that there was potential for the storms to track right over the studio and force them to take cover in a small room that would be safer than staying in the studio.

"We didn't have to [take cover] thankfully because as it neared, we could tell it would miss us by about a half a mile," Constanzer said, noting that it was the chief meteorologist who made the final call.

"There, the storm did do some extensive hail damage to a few car dealerships along I-65 with golfball size hail," she recalled, adding that it was, "Definitely not a storm you wanted to be outside in."

At least five deaths were reported in the Birmingham, Alabama, area, and one additional death was reported in Newton, Georgia, following the late March severe weather outbreak.

AccuWeather forecasters said that the volatile pattern with frequent outbreaks of severe weather that developed late in March may be only the beginning. As the climatological peak of tornado season draws near in the United States, April and May could be particularly dangerous this year as the ingredients come together for frequent outbursts of severe weather.