When does tornado season hit its peak across the US? 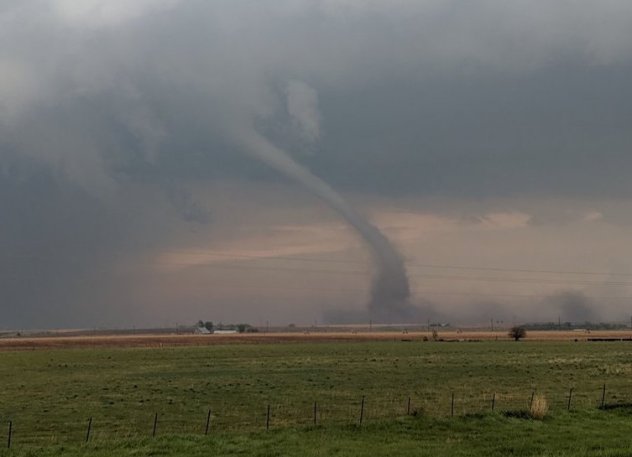 Tornadoes can occur year-round anywhere over the lower 48 of the United States, but the spring to summer period is prime time for severe thunderstorms that spawn the violent swirling columns of air.

Building warmth and surging humidity are key ingredients for thunderstorms which, when severe, can evolve to produce tornadoes.

"Severe thunderstorms will typically form when we get warm, moist air from the Gulf of Mexico clashing with cool air from Canada and sometimes dry air from the deserts," AccuWeather Meteorologist Brett Edwards said.

"We often see the most tornadoes develop from central Texas, northward through the Nebraska and Iowa," Edwards said, adding that this area is often referred to as "Tornado Alley." 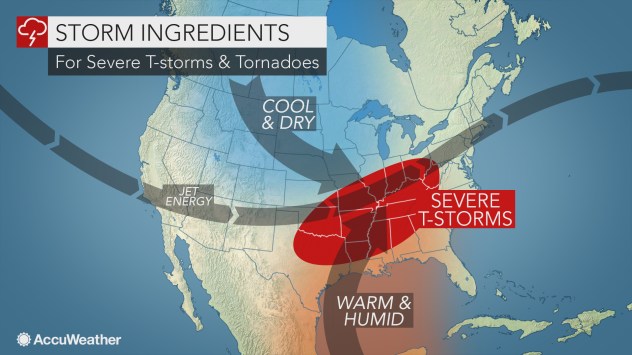 In order for severe thunderstorms to form, there must be a mechanism for air to rise in vigorous fashion. As a column of air rises through the atmosphere, it cools and causes moisture within to form the towering clouds we see as thunderstorms. The more moisture available and the cooler the air is aloft, the more efficient and potentially the more violent this process is. A push of dry air or cooler air from the outside can also intensify this process.

Any time there is a surge in temperature and humidity levels, combined with the approach of cooler and drier air thunderstorms can erupt. The most dramatic time of the year for this is in the spring to early summer.

Areas of the country that typically warm up the fastest with an ample supply of moisture are usually the most likely areas for early-season severe thunderstorms and tornadoes.

The peak for tornadoes during April extends from the South Central and Southeastern states to the Ohio Valley. This region often experiences surges in warmth and high humidity early on in the season.

During April and May, much of the Pacific coast states experience a pulse in locally severe thunderstorms and tornadoes. This occurs as winter's chill eases and there is still moisture left over from the Pacific storm season. Severe thunderstorms tend to diminish late in the spring and summer since moisture is often lacking during that time.

Farther to the east during May, the risk of tornadoes expands to much of the southern Plains, more of the Midwest and the southern Appalachians due to expanding and more persistent warmth and higher humidity.

The Florida Peninsula also experiences a peak in May as weak fronts tend to stall over the region, the dry season has ended and humidity levels surge as well as an uptick in sea breeze-induced thunderstorms. During the summer months, the tornado risk lowers somewhat over the Florida Peninsula as the northeast trade winds increase from the Atlantic and regulate the temperature. However, during the summer and autumn, tropical storms can also unleash tornadoes in Florida and much of the Deep South.

It is during the summer months when the Northeast, northern Plains, Rockies and Desert Southwest typically experience the greatest risk for tornadoes annually.

In New England, for example, the region is surrounded by chilly water on the eastern and southern side during the spring months. The chilly water tends to suppress thunderstorm activity. Once the Atlantic warms up, the risk of severe weather increases in the region.

Despite being void of any large bodies of water, it takes longer for the northern Plains and Rockies to warm up due to the region sitting at a higher elevation and reaching higher in the atmosphere as a result.

In the desert areas of the Southwest, the risk of tornadoes increases once the North American monsoon begins, which is when a persistent southerly flow of moisture develops, in early July. The moisture more typically fuels spotty, drenching thunderstorms, more so than tornadoes, however.

Even though there is a notable peak time of the year for tornadoes across different regions, twisters can occur any time of the year, given the right conditions. There have even been some rare instances of tornadoes in Alaska and Hawaii.

Strong storm systems can even trigger tornadoes in winter if they bring warmth, moisture, cool air and strong winds aloft together in such a way as to spur thunderstorm formation and escalate those storms to severe levels.

The Deep South tends to experience a secondary but significant uptick in severe weather during the midautumn as storm systems begin to strengthen and tap warm, moist air from the Gulf of Mexico, prior to the spread of cold, dry air from Canada during the winter.

"If there is rotation within the storm, then the stage is set for tornadoes to form," Edward said.

The mechanism as to how tornadoes form is complex and not fully understood with changing and evolving theories. Although the increasingly widespread use of Doppler radar during the 1980s and 1990s, which allows meteorologists to see wind patterns inside the thunderstorms, has taken the study forward by leaps and bounds.

The increase in real-time storm spotters and instantaneous video has also given the science a tremendous boost.

The general consensus among meteorologists is that air that normally rotates gently in the horizontal is twisted to the vertical in severe thunderstorms. The change in wind direction and speed at different levels of the atmosphere is known as wind shear, which can add spin and help this process along. 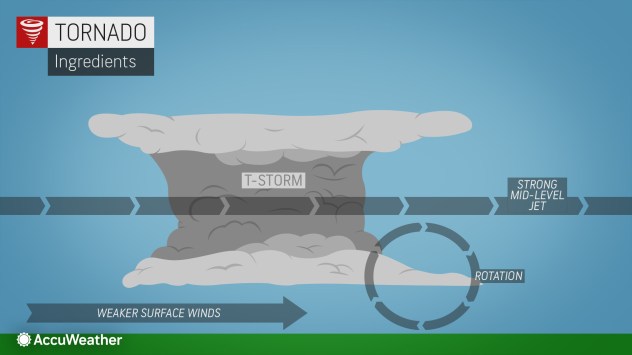 In some cases, the entire thunderstorm begins to rotate due to strong wind shear.

Next, strong updrafts and downdrafts within the thunderstorm can then cause a small column of air to spin at an increasingly rapid pace and produce a funnel cloud. Once this funnel extends to the ground, a tornado is born.

In terms of the deadliest forms of weather phenomenon, heat kills more people per year, on average, than tornadoes in the United States, according to the Centers for Disease Control and Prevention (CDC).

Heat kills an average of 130 people per year, based on a 30-year average using CDC data from 1989 to 2018. The second deadliest form of weather is flooding with 87 fatalities per year, followed by tornadoes at number three with 69 deaths per year.