Some of the highest temps of the year created perfect conditions for severe weather across the Northeast and mid-Atlantic Thursday -- and one of the most dramatic displays of the day was caught on camera.

A terrifying scene was captured Thursday afternoon on Smith Island in the Chesapeake Bay when a waterspout formed right in front of Maryland resident Katherine Donaway's camera and promptly roared ashore.

By definition, as the waterspout came ashore, it turned into a tornado. Traveling farther inland, the tornado picked up debris and Donaway's shock and fear could be heard behind the camera.

"Oh, lord!" Donaway could be heard saying as the tornado drew closer to a nearby home.

As the tornado slammed into a house next to Donaway's, the home's roof can be seen flying through the air. Donaway quickly took cover behind a wall as the tornado thundered past her home.

According to the Storm Prediction Center's (SPC) storm reports, the house that took the direct hit from the tornado collapsed. Photos shared on Twitter late Thursday evening show the extensive damage the tornado caused on Smith Island. On Friday, the tornado was officially rated an EF-1 by the National Weather Service.

The waterspout that caused the damage on Smith Island Thursday night formed from a thunderstorm moving over the area. 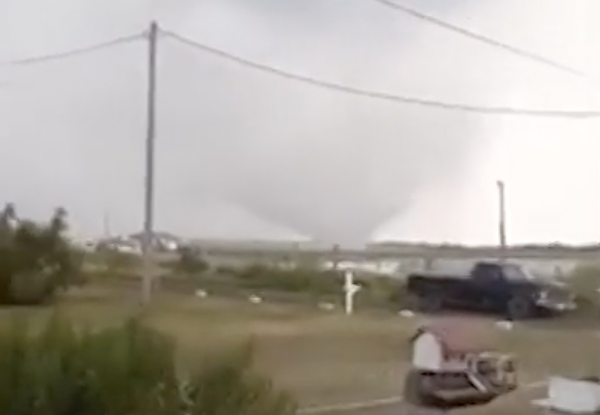 Picture of the waterspout over the water near Smith Island on Thursday. (Katherine Donaway via Storyful)

But sometimes waterspouts can form when no thunderstorm is present and the conditions are just right. These “fair weather” waterspouts can develop when large differences in air and water temperature are present, and they commonly occur across the Great Lakes in the United States.

Although it's rare that waterspouts cause damage "as most are weak and occur outside of severe thunderstorms," AccuWeather senior weather editor Jesse Ferrell noted, some can be destructive.

"According to the NOAA Tornado FAQ, the deadliest marine tornadoes in the U.S. were two that formed on land but moved over water," Ferrell said. "In 1814, a tornado moved onto the water at the Charleston, South Carolina harbor, sinking a schooner and killing 25. More recently, in 1978, a tornado passed over Pomona Lake, Kansas, capsizing a tour boat and killing 16."

And Maryland wasn't the only state where severe weather wreaked havoc on Thursday. According to an AccuWeather analysis, as thunderstorms rumbled across multiple mid-Atlantic and Northeast states, a total of 198 wind damage reports were made throughout a 24-hour period.

AccuWeather radar shows the storm moving over Smith Island on the evening of Aug. 4, 2022. The location of the tornado report is shown as a red dot.

Thunderstorms brought high winds and dangerous lightning to many areas on Thursday. In Washington, D.C., a lightning strike killed three people and left one other critically injured near the White House.

While the highlight of the photo, which was shared on social media, is the bolt of lightning, the stands could be seen full of fans and players on the field. Online, people discussed the concern for the fans' and players' safety, but the game continued on and was not delayed for lightning. 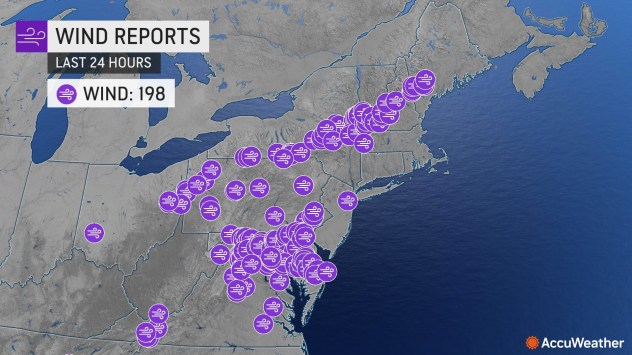 Farther north in New York City, thunderstorms put on a lightning show for residents to enjoy Thursday evening. Photographer and storm chaser Nicholas Isabella shared photos and videos of the lightning illuminating the sky across New York City on his Twitter account.

As the atmosphere warmed up to the hottest levels so far this year in many places across the Northeast, conditions were just right for severe weather to develop.

From Delaware to Massachusetts, temperatures were in the upper 90s, and some locations even reached the century mark on Thursday.

The Skyhaven Airport in Rochester, New Hampshire, reached 100 degrees Fahrenheit, making it the hottest place throughout New England on Thursday. 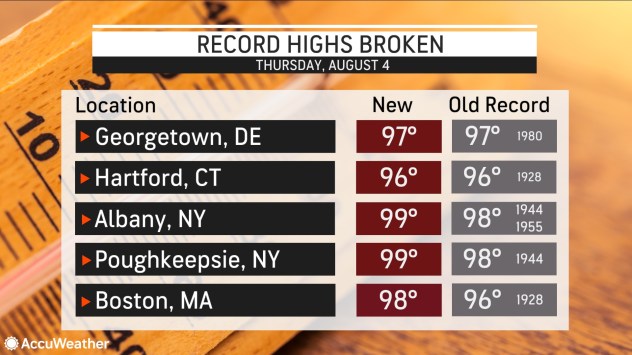 The daily high-temperature record of 96 F set back in 1928 was broken in Boston when the mercury reached 98 F Thursday afternoon.

In Albany, New York, the temperature came in just shy of 100 F at 99 F. According to the National Weather Service (NWS) office in Albany, the 99-degree reading was the highest temperature recorded in the city since 2011. This temperature also broke the previous high-temperature record of 98 F, which was set back in 1944.