Thunderstorms unleashed another round of life-threatening flooding in the state early Thursday with 2 inches falling in just 23 minutes in one town near St. Louis.

Over a month's worth of rain fell in less than 24 hours from late Wednesday through Thursday morning due to training thunderstorms, or storms that track over the same areas over a short period of time, unloading a significant amount of rainfall.

Crestwood, Missouri, a western suburb of St. Louis, received a whopping 2 inches of rain in just 23 minutes, too much rain for drainage systems to handle. Basements across the area were inundated and roads became impassable due to early-morning floodwaters.

St. Louis, which typically measures 3.38 inches of rain in all of August, saw rain gauges fill up with 4.67 inches of water during the latest round of flooding downpours. Over the past two weeks, the city has measured 15 inches of rain, the city's highest two-week rainfall total on record. To put that into perspective, since the start of 2021, San Diego has measured only 10.36 inches of rain. 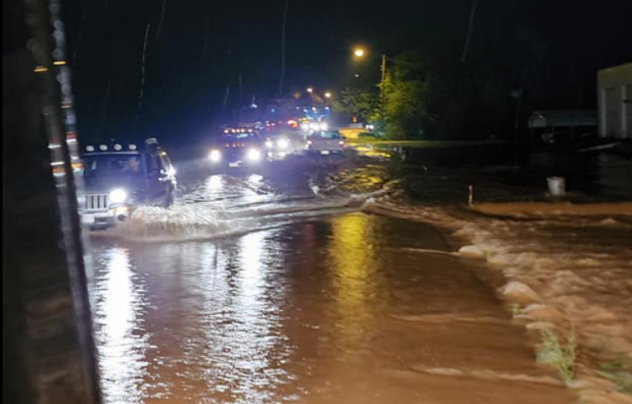 The Fredericktown Fire Department in Missouri, just southwest of St. Louis, responded to numerous calls during the early-morning hours as heavy thunderstorms triggered flash floods across the area.

The flooding rainfall early Thursday morning was not just limited to the St. Louis area with Calhoun, Missouri, located in the west-central region of the state, measuring 9.25 inches of rain.

For residents in Fredericktown, Missouri, located 80 miles south of St. Louis, Thursday's flooding was the latest extreme weather event over the past year.

An EF3 tornado ripped through the Fredericktown area on Oct. 24, 2021, with 150-mph winds snapping trees and destroying buildings. No injuries or fatalities were reported in the town after the twister or from this week's flooding. 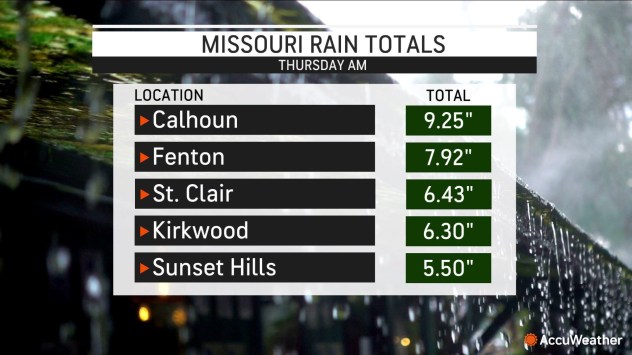 With the recent flooding disaster fresh in the mind of residents across the region, people were proactive when the sky opened up.

“We went around, knocked on everyone’s door and just let them know what was happening and try to get everyone to start moving and at least get themselves and their vehicle out,” Phil Tracy told Fox2Now, a St. Louis area news station.

Tracy is the owner of Covered Bridge RV Park and Storage in Fenton, Missouri, a town that was inundated with 7.92 inches of rain over a 24-hour period.

Elsewhere in Fenton, emergency responders had to use boats to rescue people who were trapped in homes surrounded by floodwaters.

Drier conditions are predicted to gradually return to Missouri over the next several days, but AccuWeather forecasters still say that there could be a couple of showers and thunderstorms through at least Monday.

The chance of additional rainfall is then predicted to drop significantly by the middle of next week, providing a much-needed break in the rain for residents who are still cleaning up from the recent flooding.