Violent weather across South could make for dangerous Easter Sunday

The worst of the multi-day severe weather outbreak is expected into Sunday night with tornadoes, large hail and damaging winds all likely in the southeastern U.S.

Stay up to date on the latest severe weather reports from Easter weekend here.

A multi-day severe weather outbreak is set to unfold from the southern Plains to the northeastern United States through early week, and AccuWeather meteorologists are particularly concerned about the tornado potential for portions of the Deep South on Easter Sunday.

A clash of chilly air over the center of the country and warm, moist air from the Gulf of Mexico will collide as a storm moves into the Plains this weekend.

“In order to get severe weather, you need a strong storm or an extreme weather set up; we have that,” said AccuWeather Chief Broadcast Meteorologist Bernie Rayno, citing the storm that has brought rounds of flooding rain and snow to California this past week.

"A powerful and destructive storm is expected to spread severe weather from the southern Plains to the Northeast this Easter weekend," said AccuWeather Meteorologist Brett Edwards.

The first round of severe weather was already beginning to unfold midday Saturday with feisty storms firing up across Texas.

"Large hail and damaging wind gusts will be the main threats, but isolated tornadoes are also possible," said Edwards.

“Sunday is the day we are looking at widespread severe weather,” said Rayno. 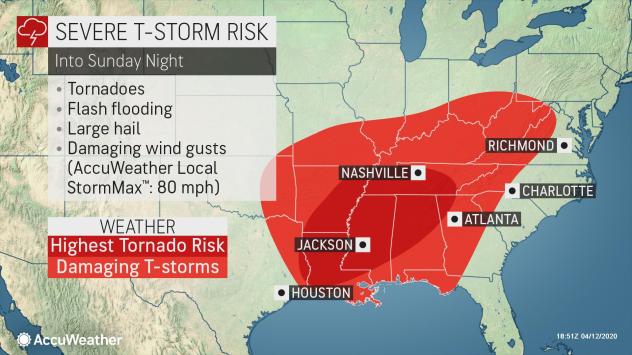 Severe storms will spread to the eastern side of the Mississippi River for Easter Sunday. AccuWeather meteorologists say that in addition to the widespread severe weather, Sunday is likely to pose the greatest risk for tornadoes. Some of these tornadoes could be strong and on the ground for more than a few minutes.

"Given the elevated threat of tornadoes, those in Louisiana, Mississippi, central Tennessee and Alabama should be prepared ahead of time to take cover should a tornado approach," said Edwards.

Thunderstorms will also still be capable of producing straight-line damaging winds to an AccuWeather Local StormMax™ of 80 mph and large hail. 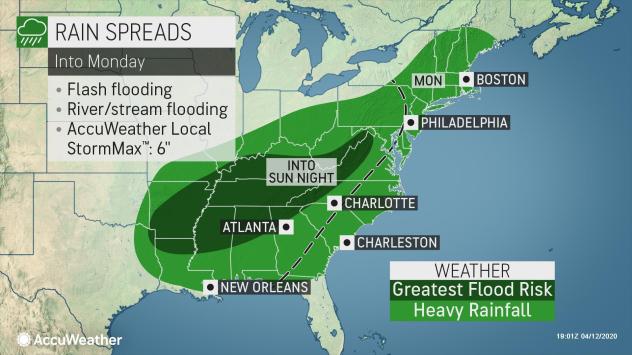 Flooding will also be a concern through the weekend as downpours drench areas across the South.

A general 1-3 inches of rainfall is expected with an AccuWeather Local StormMax™ of 6 inches. 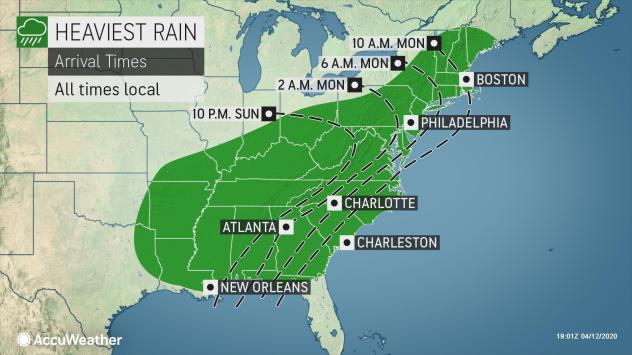 How to prepare for severe weather in the age of social distancing
Hundreds of thousands without power as heavy April snow pounds New England
Daily coronavirus briefing: NYC considering temporary burials to keep up with fatalities
When does tornado season hit its peak across the US?

Storms will persist through Sunday night and spread through the mid-Atlantic and parts of the Northeast and the Eastern Seaboard into Monday.

Although an isolated tornado or two is possible, the more widespread threats are expected to be hail and damaging winds. 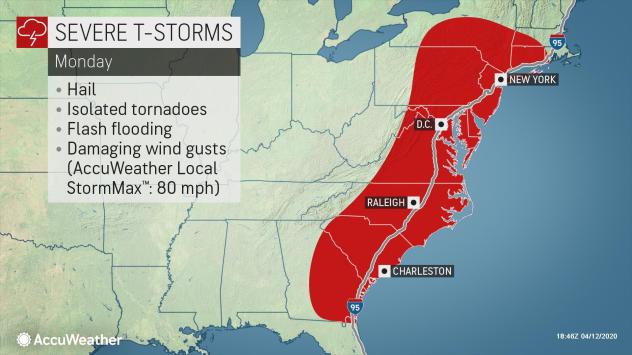 Even in the absence of severe weather, high winds swirling around the storm system are likely to produce a wide swath of tree and power line damage across the Great Lakes and Northeast.

Most thunderstorms are expected to weaken or push off-shore by early in the afternoon on Monday. 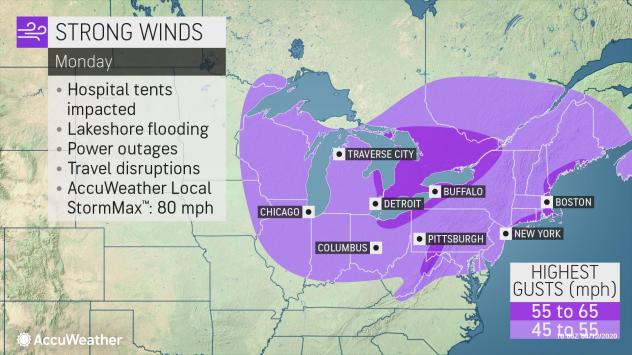 A potent weather system with widespread severe weather and tornadoes is not uncommon for this time of year.

In fact, April or early May is typically when many areas from Texas to North Carolina and Michigan often experience their peak number of tornadoes.

Some of the most infamous tornado outbreaks in U.S. history have occurred in April, including 2011's "Super Outbreak" which produced a confirmed 362 tornadoes from April 25 to 28 as well as the devastating 1974 April 3-4 outbreak.