At least 10 people were injured by a tornado that struck Texas and damaged the resale business of a celebrity storage unit buyer who is featured on the TV series 'Storage Wars.'

One family shares their survival experience after a tornado hit their home in Crockett, Texas. A business owner featured in a TV series also lost her store.

An EF2 tornado that barreled through the town of Crockett, Texas, trapped families in their homes and damaged the business of one of the stars of the hit A&E show Storage Wars: Texas.

One home damaged by the storm was owned by Frances Martin, who had lived there for 22 years. Before the family knew it, the tornado was upon them, trapping Martin and others in the living room while her grandson, Ethan Hernandez, was stuck under debris.

"I felt the walls shaking, and I had went to the kitchen to try to get to my family," Hernandez said. "I had got trapped under the door and the wall, under my legs were stuck, I had to climb through the trees to get out." 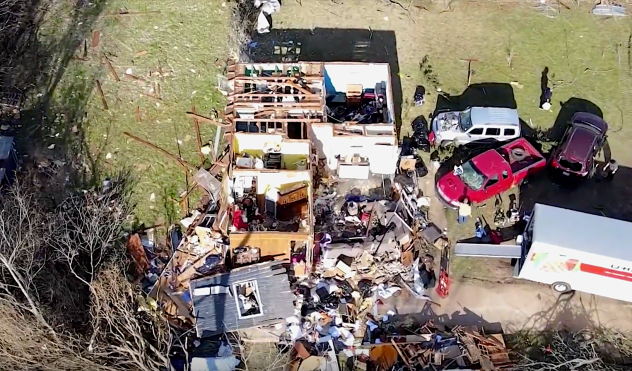 An aerial view of the damage to the home of Frances Martin in Crockett, Texas.

Martin's car was launched into the air by the twister and hit the house. Miraculously, nobody in the house was seriously injured by the storm.

Crockett is a small town of fewer than 10,000 residents and is located about 110 miles north of Houston and about 150 miles to the northeast of Round Rock and Elgin, two Austin suburbs that were hit hard in the tornado outbreak earlier this week.

Across the street, a gas station and a store owned by Lesa Lewis, one of the bidders on Storage Wars: Texas, were both badly damaged by the storm.

More than half of Lewis' inventory was lost during the storm, and she has no insurance to help replace what was lost.

"I am not giving up. This is in my blood," Lewis told AccuWeather National Reporter Bill Wadell. "Like, you know, where's my next auction, I was bidding as the storm was going on, you know, I was bidding on lockers and I had to back off because we got hit!" 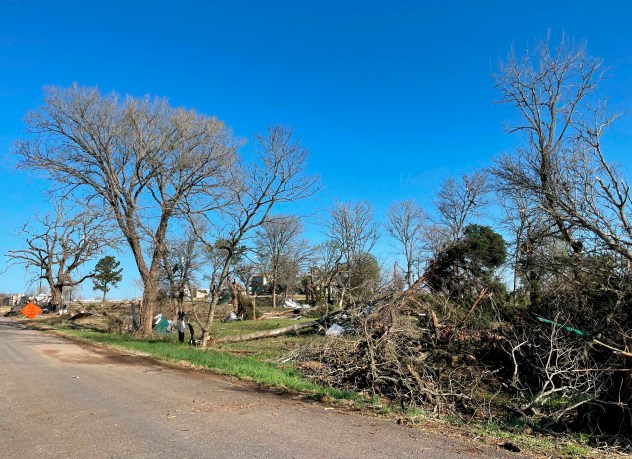 Lewis has taken a lot of gambles betting on storage containers, but she is ready to take another one by working hard to restart her business.

"When you got in here, it was just like you just wanted to cry, and I did. I went home and cried," Lewis said. "But it is what it is, you know. I have no insurance so I got to start over again."

Texas Gov. Greg Abbott confirmed that at least 10 people were injured by the tornado that struck the Crockett area, with about 30 structures damaged by the storm, KHOU-11 reported.