Nashville, which was battered by a devastating tornado earlier this month, is once again at risk of volatile weather.

Following a few severe thunderstorms over the southern Plains on Monday night, all forms of severe weather, including tornadoes, are possible over portions of the Tennessee and lower Mississippi valleys on Tuesday.

As warm and more humid air began to flow northward over portions of Kansas and Oklahoma after dark on Monday, big storms began to erupt. 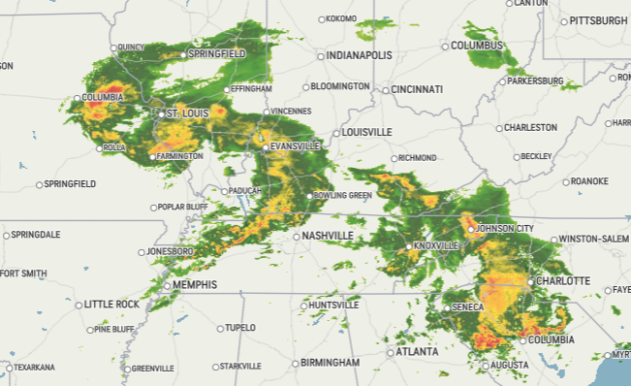 This radar image taken at 3 p.m. CDT Tuesday, March 24, 2020, shows thunderstorms in yellow and red and rain in green. (AccuWeather)

An expanded risk of violent storms is expected as warm and humid air surges over the Tennessee Valley region through Tuesday evening.

The main threat from storms into Tuesday evening are likely to be large hail and torrential downpours with frequent lightning strikes. 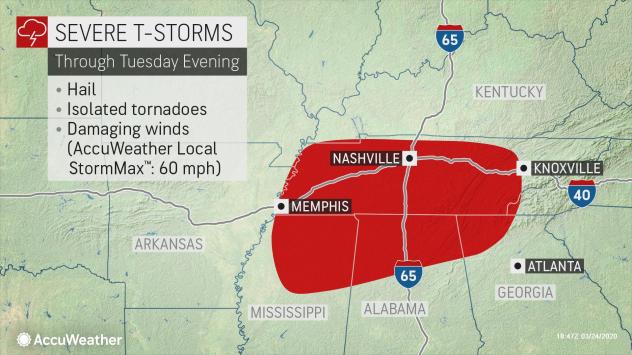 "We are concerned about a narrow zone that could allow a few isolated tornadoes and storms with damaging winds to develop over portions of Tennessee," AccuWeather Storm Warning Meteorologist Michaela Heeren said.

This risk will extend southward to include the northern portions of Mississippi, Alabama and Georgia as well. 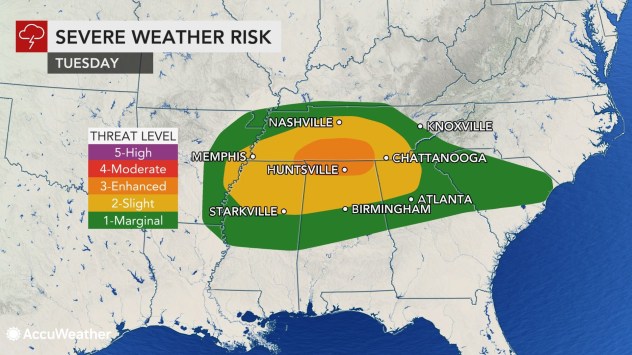 The threat of severe weather is likely to extend into the first part of Tuesday night.

The swath in which some of the severe storms may occur on includes the Nashville, Tennessee, area that was hit hard by tornadoes a few weeks ago. The storms took dozens of lives and demolished long-standing neighborhoods in middle Tennessee during the early morning hours on Tuesday, March 3.

There have been 163 tornadoes in 2020 through March 11, based on preliminary storm reports from the Storm Prediction Center. January and February both yielded above-average numbers of tornadoes, and even though March's preliminary number for twisters is pacing behind average, there have been more tornado fatalities than the three-year average with a total of 25, compared to SPC's three-year average of seven. The strongest tornado so far in 2020 was the Cookeville, Tennessee, storm with a strength of EF4 and estimated winds of 166-200 mph on March 3. 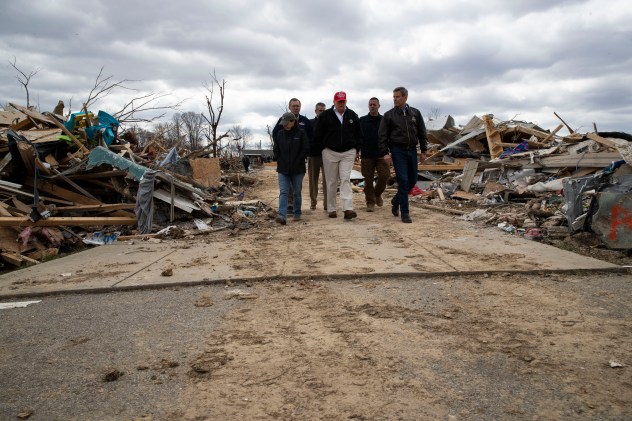 As the same storm system continues to move eastward, a narrow zone of heavy, gusty and perhaps isolated severe weather may occur in the eastern part of the Carolinas to southeastern Virginia on Wednesday. 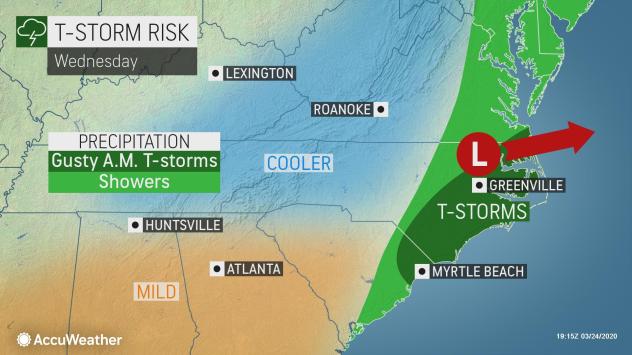 Any storms on Wednesday along the southern Atlantic seaboard are likely to be brief due to the fast movement of the system.

The risk of severe weather is likely to return to the South-Central states on Thursday. Storms may fire over portions of Kansas and Oklahoma later Thursday. The severe weather threat, including tornadoes may then expand to more of of the southern Plains and lower Mississippi Valley on Friday.