Flood-weary portions of the I-95 corridor faced flash flooding Wednesday afternoon, while the Tennessee and Ohio river valleys are forecasted to receive repeated thunderstorms.

Multiple rounds of showers and thunderstorms, some of them extremely heavy, were moving across portions of the Tennessee and Ohio river valleys on Wednesday, and AccuWeather forecasters warn as the storms track eastward, they will continue to pose a major flash flooding threat for the Washington, D.C., and Baltimore metro areas.

"Given the catastrophic recent flooding that has occurred in parts of Kentucky and West Virginia of late, the threat for more heavy rainfall is a serious concern that may quickly escalate if persistent downpours occur an area that has seen recent flooding," AccuWeather Chief Meteorologist Jonathan Porter said.

The I-95 zone from Washington, D.C., to Baltimore and Wilmington, Delaware, was under a flash flooding threat Wednesday afternoon. A flash flood warning was issued for the nation's capital, as well as surrounding cities such as Arlington, Virginia and Silver Spring, Maryland, through Wednesday evening.

High water levels have already come to the D.C. area, including on Rhode Island Avenue and New Jersey Avenue.

The source of the rainfall this week is a slow-moving cold front, which remains draped across the Ohio Valley and into the Northeast. While the front is steadily moving southeastward, it has been in no hurry to do so, bringing rounds of rain to many of the same locations.

There are a few spots that could benefit from the impending rain, including northern Pennsylvania, New Jersey and most of New England, where pockets of short-term dryness issues have developed, according to the U.S. Drought Monitor. However, for much of the Tennessee and Ohio valleys, and the central Appalachians, there has been too much rain in a short time.

"Notably, parts of the Midwest and Ohio Valley hit recently by record rainfall such as the St. Louis area, southern Missouri, southern Illinois and Kentucky will all be at risk for multiple rounds of rain again with this event," AccuWeather Meteorologist Alex DaSilva said. "The heavy rain threat will also shift eastward into parts of the Virginias," DaSilva added, noting that a broader area may be threatened by flooding in localized areas. 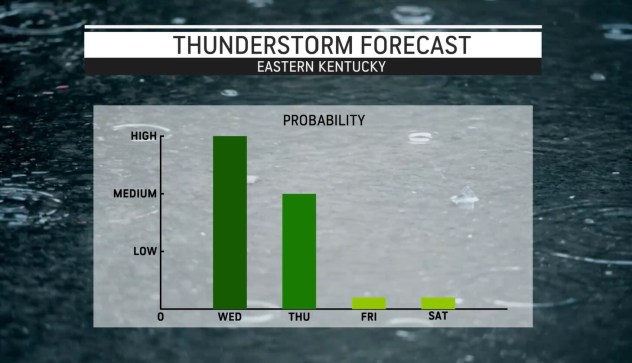 Oftentimes flooding occurs in urban areas. Since cities are generally covered in impervious surfaces such as asphalt and concrete, there are few locations to water to drain, leading to rapid flooding. Such flooding was captured by drone footage in New York City last month, with high water leading to water rescues and road closures. However, this isn't always the case.

Much like what was seen in eastern Kentucky recently, some of the worst flooding can occur in rural, mountainous regions. Unlike urban flooding, mountain flooding poses an entirely different threat. The terrain from the mountainous elevation acts as a funnel that moves all rainwater into one location by means of just gravity.

When one specific region receives a high amount of rainfall, all of the water flows to only one or two rivers which easily overwhelms the banks of rivers that many call home in the region. This has also been ongoing in some mountainous areas of the interior Southwest due to the North American monsoon, but it has been the cause of the destructive flooding in Kentucky recently.

"There has been such catastrophic damage to infrastructure – culverts, roadways, streams, etc. – in some cases the flow of water has now been completely altered by the flooding that previously occurred – which raises the potential for what would have before been considered a manageable amount of rain, but falling over a short time period to result in renewed, potentially significant flooding," Porter said.

By Thursday, the front will finally shift south, ending the heavy rain threat across much of the Ohio and Tennessee valleys. However, portions of Virginia, the Carolinas, the southern Appalachians and the lower part of the mid-Atlantic are most likely to be hit by heavy thunderstorms. 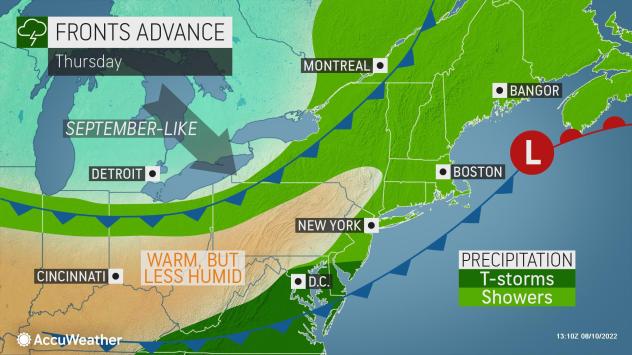 Lingering showers could dampen some areas of the Midwest and interior Northeast Thursday, but the showers are not expected to be heavy enough to create flooding concerns.

For those looking for the return of dry weather, relief will be quick to arrive following the passing of the cold front. Behind the front, a return to drier, less humid conditions is set to unfold, giving residents a small taste of fall at the end of the week and the start of the weekend.