Severe flooding that developed across Australia within the last week forced tens of thousands of residents of New South Wales to evacuate, while those still at home now have to be on alert for swarms of spiders, including one venomous species.

Millions of spiders have taken refuge on fences and houses across the coastal areas of New South Wales, while many more could be seen escaping the rising waters to get to higher ground.

My hometown is flooding right now. And for those who wonder if there’s really a lot of spiders in Australia. See the brown in this pic? That’s all spiders trying to escape the flood pic.twitter.com/dk8ydGmHwg

Shenae Varely told The Guardian that she saw spiders covering the entire length of a railing that was not underwater in Penrith Weir in western Sydney. She added that the arachnids were climbing up her husband's legs as he stood still, trying to capture the swarm on video.

Officials have also singled out one particular spider that can have increased activity in the coming days. The deadly funnel-web spider population could see a "boom" in numbers as ideal conditions develop amid the high humidity and temperatures trending warmer, according to 9NEWS.

Residents are reminded to check shoes, sheets and clothing to avoid a venomous bite from a funnel-web spider.

Dr. Lizzy Lowe, an arachnologist at the independent research company Cesar Australia, told The Guardian that it is not uncommon for clusters of spiders to appear during floods during certain times of the year.

“In spring and summer, it’s peak spider time. Many will die off in the winter or survive as egg sacks," Lowe said. "If you get floods in summer, you’ll see lots of spiders." 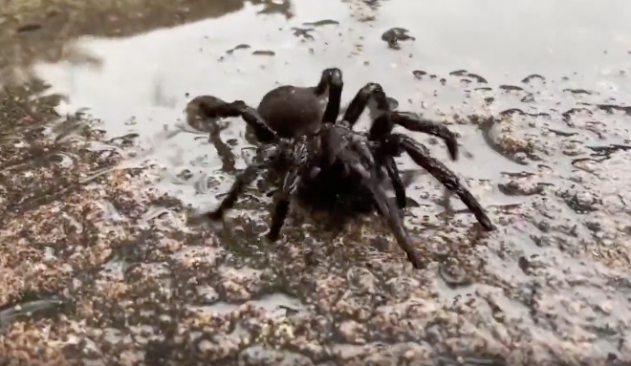 An up-close look at a funnel-web spider, considered to be one of the most dangerous in the country. (Australian Reptile Park via Storyful)

Lowe added that there are no more spiders than usual, but people are just seeing more of them, especially since most of the spiders seeking shelter are ground-dwelling.

Spiders aren't the only critter that have had their habitats disrupted due to the severe flooding across New South Wales.

Snakes have gathered in trees in an effort to escape floodwaters. One resident also reported snakes swimming over to boats trying to get onto something dry.

Farther inland in the state, residents are dealing with a plague of mice. However, this rodent invasion is being blamed on an unusually large grain harvest, not the historic flooding, according to Reuters.

Around 40,000 people have been forced to evacuate their homes in New South Wales since heavy rainfall arrived late last week, according to NPR.

As of Wednesday, at least two deaths have been blamed on the flooding, including one man who died after his car became stuck in the floodwaters to the north and west of Sydney. 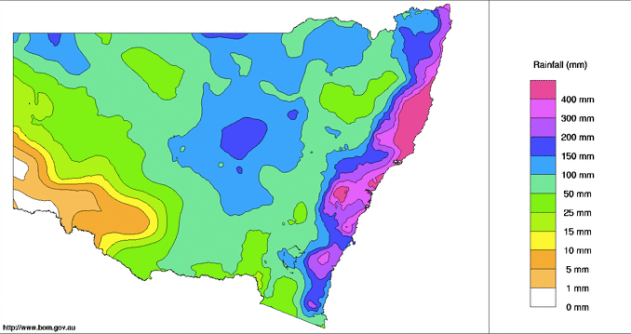 The map shows the amount of rain that fell across New South Wales and the Australian Capital Territory from Wednesday, March 17, to Tuesday, March 23, with some of the highest rainfall totals (blues and purples) occurring along the coast of New South Wales. (BOM)

Justin Robinson, the national flood services manager at the Australian Bureau of Meteorology, told CNN, "I've been a flood forecaster in the Bureau for 20 years, and this is probably the worst flooding that I've experienced and have had to forecast."

According to the Australian Bureau of Meteorology, in excess of 400 mm (16 inches) of rain has fallen along the northern New South Wales coast during the last seven days.

Port Macquarie is one area that has been hard hit with rainfall as totals reached 200-300 mm (8-12 inches) in just 24 hours Friday into Saturday. From Thursday, March 18, to Tuesday, March 23, a total of 455 mm (17.9 inches) of rain fell. Water quickly collected in low-lying areas across the coastal town with reports of floodwaters reaching up to door handles in some locations.

"This is nothing like we've seen since the 1960s," said New South Wales Premier Gladys Berejiklian at a news conference over the weekend. According to CNN, for some of the hardest-hit areas, this is a once-in-a-century flooding event.

The heavy rainfall across the region is causing delays in the delivery of coronavirus vaccines ahead of the rollout of the Phase 1B. However, according to Australia's ABC News, the five metropolitan vaccination hubs in New South Wales remained open on Monday as the state moved into the next phase of vaccinations.

In excess of 150 schools closed due to flooding across New South Wales on Monday and Tuesday.

As rescue and recovery efforts continue through the end of the week, a drier pattern will emerge over New South Wales, allowing water levels to begin trending toward normal over the region.

Heavy rain first arrived across Queensland in northeastern Australia earlier in the week.

During a 24-hour period leading up to Wednesday morning, 550 mm (21.65 inches) of rain inundated the coastal community of Byfield, Queensland.

Farther inland, 216 mm (8.50 inches) of rain in 24 hours led to flash flooding in Sapphire, Queensland, when waters in Retreat Creek rose about 9 meters (nearly 30 feet) within a few hours early on Wednesday.

Thomas Mortlock, a senior risk scientist, explained in an interview with the BBC that the expanse of the flooding in Australia would cover an area of two European countries, extending from the north of England or Scotland to southern France or Switzerland.

Mortlock added that this weather pattern isn't unusual for southeastern Australia. However, the wet summer in addition to the prolonged period of heavy rain in the last week increased the risk of flooding.

This summer for the Land Down Under was ruled by a La Niña pattern, which led to a wet summer; in comparison, the summer of 2019-2020 had much drier conditions as a result of an El Niño pattern, which helped set the table for historic bushfires.

"Communities who were battered by the bushfires are now being battered by the floods and a deep drought prior to that. I don't know any time in our state's history where we've had these extreme weather conditions in such quick succession in the middle of a pandemic," said Berejiklian.

During late 2019 and early 2020, AccuWeather estimated that bushfires across New South Wales and Victoria caused $110 billion in total damages and economic losses.