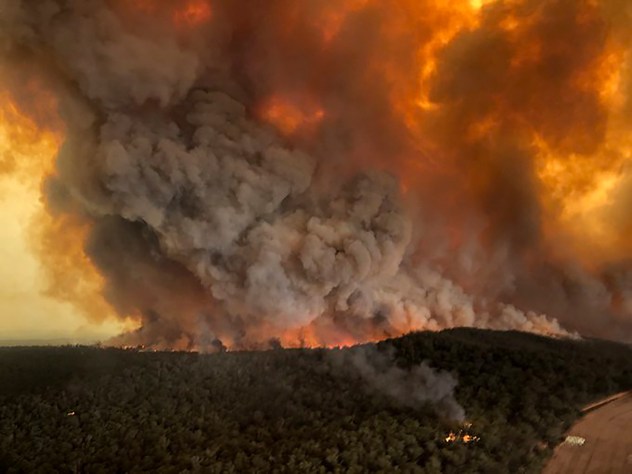 In this Monday, Dec. 30, 2019, aerial photo, wildfires rage under plumes of smoke in Bairnsdale, Australia. (Glen Morey via AP)

Australia’s wildfires remain blazing and, despite some soaking rainfall in some areas early this week, the overall weather pattern won’t provide much relief in the coming days and weeks. AccuWeather predicts “continued below normal precipitation” in the drought and wildfire-plagued states of New South Wales and Victoria through January, according to AccuWeather senior meteorologist Alan Reppert. The factors contributing to the country’s wildfires have led to an “extreme and extraordinary fire situation that may be the worst in history,” said AccuWeather Founder and CEO Dr. Joel N. Myers.

AccuWeather estimates the total damage and economic loss caused by the Australia wildfires from September 2019 and into 2020 will be $110 billion, according to Myers, based on an analysis incorporating independent methods to evaluate all direct and indirect impacts of the fires based on a variety of sources.

AccuWeather’s estimate includes damage to homes and businesses as well as their contents and cars, job and wage losses, farm and crop losses, infrastructure damage, auxiliary business losses, school closures and the costs of power outages to businesses and individuals as well as destruction of wildlife. The estimate also accounts for economic losses because of highway closures, evacuations and increased insurance premiums throughout the affected areas, as well as reduced value of real estate across the country -- home to 25.2 million people -- firefighting costs, flight cancellations and delays, and the current and long-term residual health effects -- including the increased risk of heart attacks and possible bone mass loss -- on those impacted by dirty air.

The U.S. Centers for Disease Control and Prevention says the people greatest at risk from wildfires “include people who have heart or lung diseases.” Fire-produced air pollution also has been linked to many other diseases.

"The forest fires hitting Australia are doing great damage to the Australian economy, their way of life, the health of the people, and the environment, which will persist for years," said Myers.

The fires have been blamed for killing at least 25 people and almost half a billion animals in Australia. Tens of thousands of residents evacuated their homes in New South Wales and Victoria as a state of emergency was declared late last week. The wildfires have damaged an estimated 20 million acres since starting in September 2019, according to Reuters, a land area about the size of South Carolina.

By comparison, California’s worst fire season was 2018 when almost two million acres were burned. This means the Australia fires have burned 10 times the area burned in California.

Australia has experienced two worse fire seasons in terms of acres burned: Some 289 million acres were damaged in 1974-75, and nearly 52 million acres were scarred in 2002-03, according to the Australian Institute of Disaster Resilience. 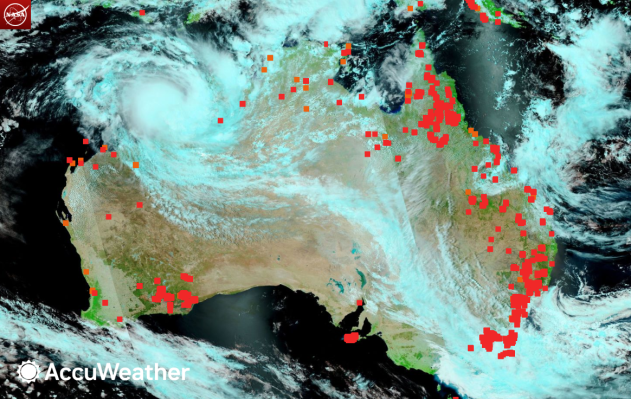 Insurance losses in Australia are estimated at $485 million this bushfire season, according to the Insurance Council of Australia. More than 2,500 buildings and 1,800 homes have been destroyed by the fires. The Insurance Journal notes, however, “Damage estimates can vary because some only contain insured losses, while others take in everything that was destroyed. After disasters, many people will pay for repairs out of their own pocket, which often leads to under-counting.”

Australia’s tourism industry, in particular, figures to be hard hit. Although there is no published nationwide data on tourism since the fires started, Australia received 9.4 million visitors who spent $44.6 billion for the year ending September 2019. The top four destinations – Sydney, Melbourne, Brisbane and the Gold Coast – are all in fire-ravaged areas. Since tourism will be impacted for several years, the tourism loss over the next three years will total $32 billion of the total $110 billion loss, according to AccuWeather.

“Now is the summer peak visitor season, the busiest and most profitable period for a lot of Australian tourism businesses,” Simon Westaway, executive director of the tourism council, told The Wall Street Journal.

The damage to the tourism industry “will be in stages – immediately with evacuations, dislocations and cancellations, but also in the longer term, because tourists buy holidays based on the image of a destination and Australia’s is being badly affected,” Judith Mair, a Queensland professor who studies tourism, environment and consumer behavior, told The Jakarta Post.

Drought conditions have worsened the situation

Spring 2019 was officially the driest of the Australia Bureau of Meteorology's 120 years of rainfall records. It follows previous dry seasons, with the year-to-date rainfall now the second-lowest on record. Summer is just starting in Australia and temperatures typically peak in January and February.

The country’s drought over the last two years has led to hotter temperatures than normal, leading to a “feedback mechanism that makes the fires worse,” Myers said.

“In addition to the above factors, winds obviously can intensify the spread of the fire,” he added. “If you have vegetation very susceptible to fire because it is dry, the fire can spread very quickly, making it more difficult to control. When everything lines up like this, the feedback loop is all in one direction with no offsetting factors and the results are very severe.”

The long-term health effects of Australia’s wildfires may be less obvious than visible damage but cannot be understated, according to Myers. Wildfires release harmful air pollutants like carbon monoxide, nitrous oxide, and fine particulate pollution known as PM2.5, which can be transported long distances, according to The New York Times. Breathing in these tiny particles can worsen asthma and other respiratory disorders, and lead to heart attack and stroke, while PM2.5 pollution is particularly harmful to older people, the very young and people with compromised immune systems.

“The fires can lead to the shortening of people’s lives,” Myers said. “If five million people lost two years off of their lives, that’s 10 million human years lost.”

As fires continue to ravage Australia, how can you help?
Despite arrival of needed rain, fire threat to soar again in Australia
New Zealand sees effects of Australia bushfires burning more than 1,200 miles away

Some relief was seen on Sunday as more moist air, lighter wind and light rainfall moved across portions of Victoria. This has slowed the spread of some fires, though the Victoria government still warns that fires may still quickly spread in some areas.

AccuWeather predicts most parts of Australia will see increased precipitation in the next two weeks or so, according to Reppert. “But the southeast corner of Australia, near Sydney especially where a lot of the fires are, looks like it’s going to struggle to get much precipitation for at least the next month, maybe even two months.

“There will be some rainfall – they’re coming out of their dry season right now and getting into more of a wetter pattern climatologically speaking – but it still looks dry,” Reppert said. “Not as dry as it has been – with almost no rainfall over the last month or two. But it does look like it’s going to be a little bit wetter, though still below normal.”

Here’s how you can help with relief efforts in Australia.

Download the free AccuWeather app to see the latest forecast and advisories for your region. Keep checking back for updates on AccuWeather.com and stay tuned to the AccuWeather Network on DIRECTV, Frontier and Verizon Fios.