Washington, D.C., Baltimore under serious risk of flash floods through evening commute. Get the latest.

As a wildfire scorched through India MacDonell's home in Goongerah, Victoria, on Dec. 30, she desperately tried to put out the fire using a water hose.

Tens of thousands of residents were driven from their homes throughout the states of New South Wales and Victoria as Australia's catastrophic bushfire season continues.

"We don't take these decisions lightly," Berejiklian said, according to The Sydney Morning Herald.

Australia bushfires rage out of control

Kangaroo Island was another place where the bushfire situation worsened on Friday. A fire, named the Ravine fire, was burning on the island's west end for several days within containment lines.

Changing winds from an incoming front caused the fire to jump the containment lines, uncontrollably expanding in all directions through the Flinders Chase National Parks and towards Southern Ocean Lodge, a luxury resort in the area. While fighting the blaze, the Country Fire Service (CFS) closed roadways and asked for those in the region to evacuate, including the town of Parndana.

Reports came in Friday evening that the luxury resort sustained significant damage from the fires. However, in following their evacuation and fire emergency plan, no guests or staff were injured.

In response to the mass evacuations and need for help around Victoria, Australian Prime Minister Scott Morrison and Defence Minister Linda Reynolds agreed to send military aid to provide humanitarian assistance and carry out evacuations in the coming days.

Multiple Black Hawk and Chinook helicopters, fixed-wing aircraft and Navy vessels have been sent to Victoria and New South Wales for aid. The aircraft will be used for firefighting efforts as well.

The burnt acreage total and death toll were both officially raised on New Year's Day to total over 5 million hectares (12 million acres) of burnt land and 17 deaths. The deadly crisis has also extended to wildlife in the country, as an estimated 480 million animals have been killed by the disasters.

Sussan Ley, the federal environment minister, previously said that up to 30 percent of the country's koala population may have been killed due to the destruction of their habitat. 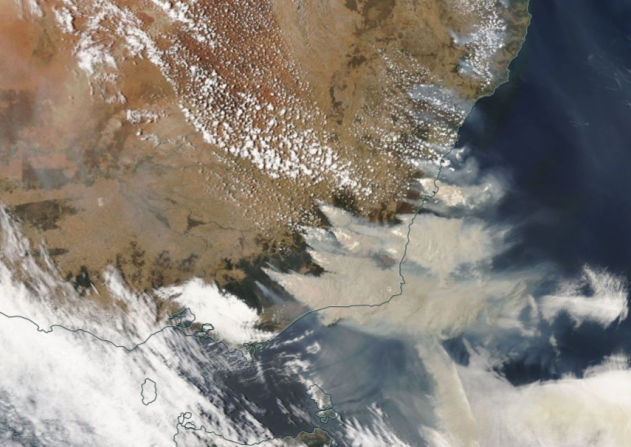 Smoke from the dozens of fires in Victoria and New South Wales was visible from space on Saturday. (Photo/NASA).

This is the view from a @Qantas flight on its way to Melbourne tonight. My housemate is on board. #AustraliaBurning @7NewsMelbourne pic.twitter.com/65HaneQKnO

Pyrocumulous clouds form as hot air from a large wildfire rises into an unstable part of the atmosphere, similar to that of a developing thunderstorm, and a smoke-filled cloud develops. In some occasions these clouds can produce rain, but also lightning that can spark new fires.

Some relief was seen on Sunday as more moist air, lighter wind and light rainfall moved across portions of Victoria. This has slowed the spread of some fires, though the Victoria Government still warns that fires may still quickly spread in some areas.

AccuWeather Meteorologists expect areas of light rain and lower temperatures to last into the beginning of the week across eastern Victoria and southeast New South Wales. This will continue to slow the progress of some fires.

During the second half of the week, another round of hot, dry and windy weather is expected. Progress that firefighters make early in the week containing fires will be threatened to be reversed late in the week.