AccuWeather meteorologists say a multi-day risk of severe weather will continue into Wednesday night and shift into parts of the Ohio and Tennessee valleys as the cold front responsible for those storms continues to move eastward.

The storms on Tuesday produced powerful winds as they charged across the Plains, but widespread damage was not reported, according to the National Weather Service's Storm Prediction Center (SPC). In the village of Plymouth, Nebraska, in the southeastern part of the state, winds reached 87 mph. For comparison, wind speeds of a Category 1 hurricane can range from 74-95 mph.

Around noon local time Wednesday, severe thunderstorms tracking toward Lake Michigan spun up a tornado in the southwestern Milwaukee suburb of Burlington. Tornado warnings were issued for parts of southeastern Wisconsin including Milwaukee, West Allis and Wauwatosa.

Even outside of the risk zone for severe thunderstorms, high winds can become strong enough to cause sporadic power outages from eastern Montana to the Dakotas and Nebraska. But, in this zone, the greatest risk from the winds may be from wildfires due to ongoing drought conditions and dry brush. Red flag warnings were hoisted in portions of the northern and central Plains to warn of critical fire weather conditions that are anticipated.

"The highest severe (thunderstorm) risk will be found where warm and humid air from the Gulf of Mexico overlaps with strong winds in the upper atmosphere, helping to fuel thunderstorms," explained AccuWeather Meteorologist Andrew Johnson-Levine. 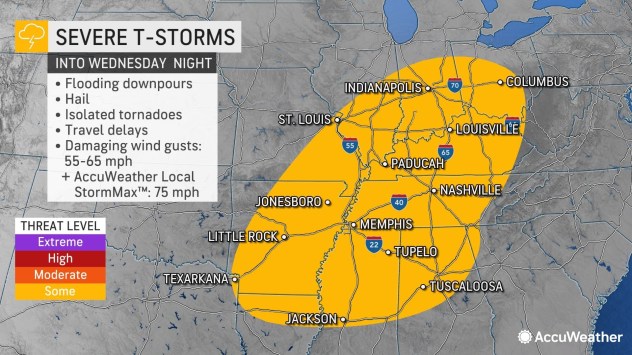 The heavy rain accompanying the thunderstorms will have the potential to carry some of the strong winds higher up in the atmosphere down to the ground. Even though flooding downpours and damaging wind gusts will be the main hazards, some of the storms could also contain hail.

Those storms may gain some intensity as they move southeastward and could bring a threat of severe weather to locations such as Cape Girardeau, Missouri; Little Rock, Arkansas; and Nashville, Tennessee. The highest likelihood of hail will be in the southern area of storms.

About 23 million people live in an area at risk for some form of severe weather into Wednesday night, according to the SPC.

A second line of thunderstorms was developing farther north during Wednesday afternoon. Those storms will move eastward through the Ohio Valley states. Indianapolis, Louisville, Kentucky, and Columbus, Ohio, are most likely to be affected by thunderstorms during the evening hours.

Regardless, these thunderstorms are expected to move quickly.

"Thunderstorms are going to approach rapidly as the cold front slides eastward, which could cause conditions to deteriorate in a matter of minutes as storms arrive," cautioned Johnson-Levine.

While thunder is always a telltale sign to head indoors, some of the storms will not produce any thunder.

"In some cases, storms may contain very strong wind gusts but produce little to no lightning," said Johnson-Levine.

The showers and thunderstorms are expected to move farther to the east on Thursday, potentially producing severe weather along the I-95 corridor. 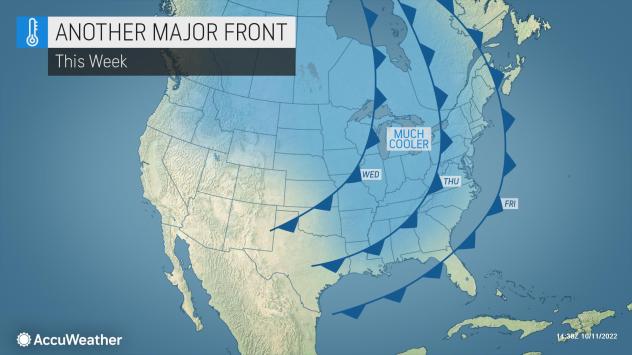 Behind the front, much colder air will pour into the Great Lakes and Midwest. In fact, any leftover moisture could produce snow showers in northern Minnesota, northern Wisconsin and the western Upper Peninsula of Michigan on Thursday. Temperatures above freezing should preclude accumulation.

An even stronger push of cold air is possible over the weekend and into early next week. Many more locations could have their first snowflakes of the season at that point.

The DART mission successfully changed the motion of an asteroid