A potent windstorm is causing the rapid spread of wildfires across the southwestern United States -- and forecasters say conditions won't ease up until Tuesday.

"The period from June through August is typically a quiet time in terms of large-scale wind events over the southwestern U.S.," AccuWeather Senior Meteorologist Mike Doll said. 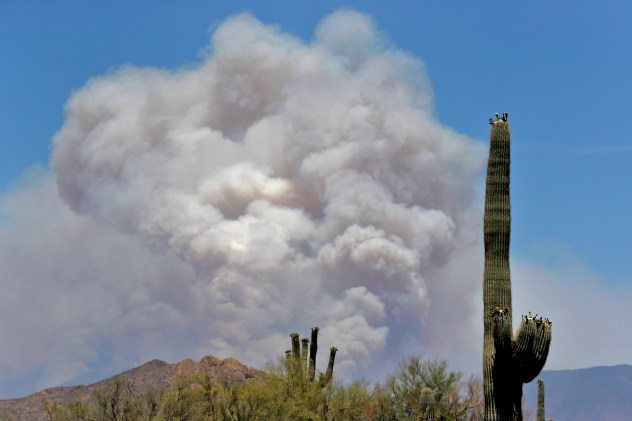 A portion of the Bush fire burns through the Tonto National Forest, Tuesday, June 16, 2020, as seen from Apache Junction, Ariz. (AP Photo/Matt York)

"Weather systems are often relatively weak as the jet stream has shifted northward into southern Canada and a large area of high pressure typically rules the Western states during the summer months," Doll explained.

There can be exceptions at times during the summer months. One such departure from the normal is ongoing as a southward dip in the jet stream has allowed a storm to bring cooler air, rain and even summertime snow to parts of the West.

Winds will also align near the ground and high up in the atmosphere, to produce stiff breezes and strong gusts from the southwest and west.

Gusty winds were already wreaking havoc in portions of Utah during Saturday night. Dozens of homes were evacuated as new fire, dubbed the Traverse Fire, grew near Lehi and Draper, Utah.

During Sunday, a wind gust of 84 mph was reported near Eureka, which sits at an elevation of around 6,500 feet along U.S. 6 in west-central Utah.

Through Monday evening, the swath of stiff breezes with strong gusts will extend from the southern parts of California and Arizona to western Colorado and south-central Wyoming. AccuWeather Local StormMax™ wind gusts are forecast to be in the neighborhood of 70 mph. 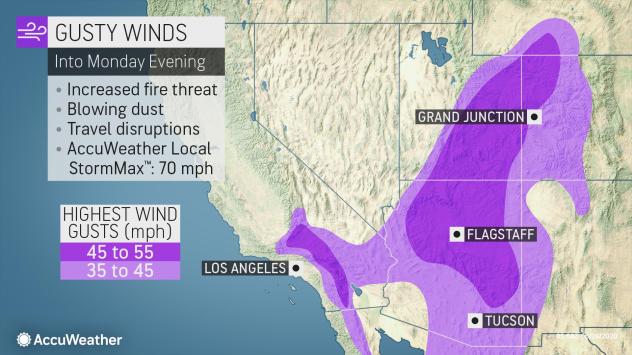 Not only will the gusty winds cause trouble for firefighters battling existing large wildfires in the region, but they will also greatly raise the potential for new blazes to ignite and spread rapidly, as was evidenced in Utah on Sunday.

A lower-than-average amount of rain and mountain snow during late winter and spring left places from Northern California and Oregon to Colorado and New Mexico to face abnormally dry conditions to extreme drought. Adjacent areas of the southern High Plains and portions of the Northwest are experiencing similarly dismal conditions.

The precipitation deficit, combined with dry air and surges of early-season heat, has led to dry soil and fast-drying vegetation.

Dozens of fires have erupted over the West in recent weeks.

As of June 26, more than 1 million acres have burned across the U.S. with the vast majority of the fires west of the Mississippi River, according to data from the National Interagency Fire Center. 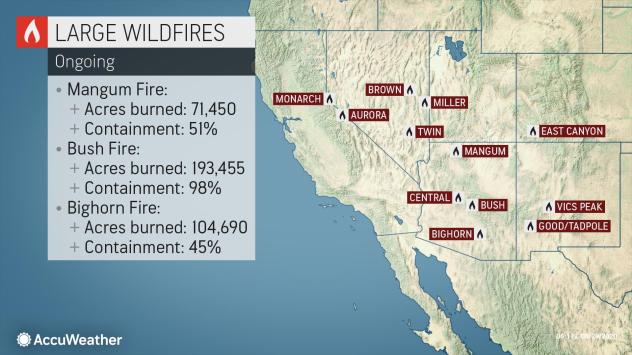 Currently, active fires have consumed close to half of the 1-million-acre figure, the agency reported on Friday. More than three dozen fires were active in the West, and of these, there were a dozen large blazes in progress. The largest fires charred Arizona with the Mangum, Bush and Bighorn fires consuming hundreds of thousands of acres alone.

"With the windy conditions through Monday, the number of fires and acres burned may increase substantially," Doll said.

Lightning strikes from spotty thunderstorms, which are expected to arrive along with a transition from hot to cool weather, may also spark blazes in the region. However, cooler air and moist vegetation over some of the ridges and peaks will deter the fire risk over the high country.

"You just don't typically see this kind of a large wind event this time of the year, and with many fires in place, it is going to be a major problem, to say the least," added Doll.

The invasion of much cooler air, combined with lesser winds, should ease the fire risk from west to east spanning Monday and Tuesday. Unfortunately, the damage may already be done by that point.

People are urged to avoid the use of power equipment, fireworks and open flames with the upcoming weather conditions. Experts recommend that people avoid parking a vehicle over dry brush as the exhaust system from an idling or recently used vehicle is hot enough to quickly start a blaze.