In a city of about 12 million, at least one building collapsed and in areas around the city, flooding caused by up to 12 inches of rain over several days proved deadly.

Roads in Bangalore, India, were buried under several feet of water on Nov. 22 after several days of torrential rain soaked the city. Dozens of people in the region have reportedly died or are missing as a result of flooding.

Heavy rain poured down across southern India last week and into the weekend, causing a building to collapse and leading to scenes of flooded streets in Bengaluru, a bustling city of more than 12 million that is also known as Bangalore.

Video footage from across the affected area shows flooded roadways and buildings as flood waters turned streets into streams.

Widespread and heavy rain swamped southeast India last week with some areas picking up more than 12 inches (300 mm). While heavy rain across the area is a yearly occurrence during the northeast monsoon, the excess rain during the middle of November led to widespread and deadly flooding.

The Central Water Commission told officials that the water flow of the Penna River, that flows through central Andhra Pradesh, reached levels not seen in the last 140 years, reported NDTV.

The flooding has forced more than 35,000 people to take shelter in 90 relief camps set up in Nellore, a city of more than 500,000 people located along the Penna River.

Heavy rain has taken its toll on the infrastructure of the region with the Rayala Cheruvu, one of the largest and oldest reservoirs in the state of Andhra Pradesh, showing cracks in one of its walls. As a precaution, several villages have been evacuated, according to local media. Roads were cut off in the area with several villages inundated with water. 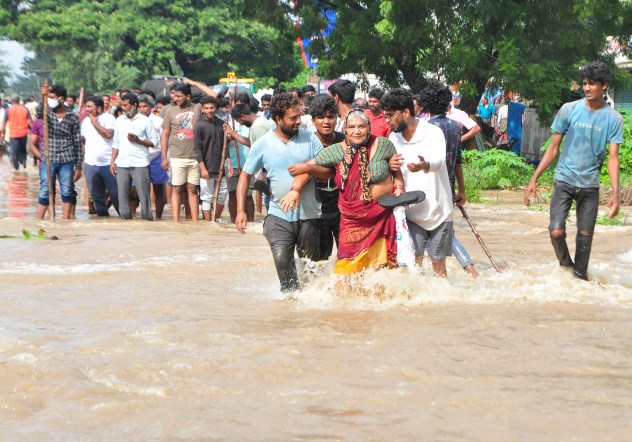 People wade through a flooded street in Nellore, in the southern Indian state of Andhra Pradesh, Saturday, Nov. 20, 2021. More than a dozen people have died and dozens are reported missing in Andhra Pradesh after days of heavy rain, authorities said. (AP Photo)

Rivers have spilled over their banks with water sweeping through villages and farmland. At least 34 have been killed by the recent flooding across Andhra Pradesh, with another 10 remaining missing, according to the Hindustan Times.

The Chennai-Kolkata National Highway-16 was closed in some areas due to flooding, and more than 17 trains were canceled on the Chennai-Vijayawada grand trunk route as the flood waters overflowed onto the railway track.

On Monday, it was reported by local media that a two-story residential building in Bengaluru collapsed, but it was not immediately clear if there were any injuries or fatalities.

Local weather observations in Bengaluru showed rain in the area Sunday night into Monday morning. While less than an inch was reported at the official weather observation site, pockets of heavier rain could have fallen in parts of the city, according to AccuWeather meteorologists.

India’s northeast monsoon is a yearly occurrence that pumps moisture from the Bay of Bengal into southeast India during the autumn and early winter, according to AccuWeather Senior Meteorologist and Lead International Forecaster Jason Nicholls. This can bring rounds of intense rainfall to the region that can lead to flooding.

"There is a weak area of low pressure across the southern Bay of Bengal that can bring another round of downpours to southeast India [through] the weekend," said Nicholls.