With warmer weather comes more people heading outdoors for camping. It also comes with the risk of severe weather. AccuWeather spoke with several park officials on how to stay safe from storms.

A change in the jet stream pattern will favor long-tracking severe thunderstorm complexes beginning late in the Independence Day weekend and ongoing through next week from the northern Plains to the central and southern Appalachians, AccuWeather meteorologists warn. There's the potential for one or more intense complexes to develop that could have widespread damaging consequences.

A large northward bulge will develop in the jet stream over the Great Plains next week and set up a bit of a chain reaction, AccuWeather Senior and Long-Range Meteorologist Joe Lundberg said. "Heat [will] build over the middle of the nation. At the same time, a southward dip in the jet stream associated with a wedge of cool air will strengthen in eastern Canada and the northeastern United States."

Disturbances traveling along in the jet stream on the edge of the cool and hot air are likely to trigger complexes of thunderstorms that can last for days and travel hundreds of miles. "These complexes will parade one after another," Lundberg said. 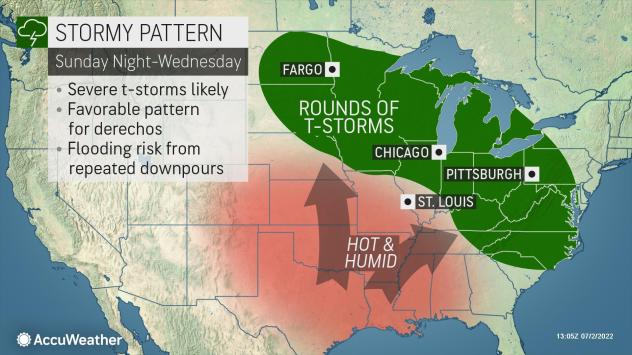 In most cases, the thunderstorms will bring a brief period of gusty winds and downpours that can last for several hours. "In more extreme cases, the complexes can bring damaging winds, hail, flash flooding and isolated tornadoes," Lundberg said.

If a storm complex continues to cause damage continuously or intermittently for 400 miles or more along a 60-mile-wide or more swath, such a meteorological phenomenon is deemed a derecho, according to the Storm Prediction Center. The official derecho criteria was recently revised upward from 240 miles or more.

AccuWeather's long-range team of meteorologists has been studying the setup during the last week of June and expressed concern for one or more of the thunderstorm complexes to reach derecho status during the first full week of July.

A derecho can be an especially devastating weather event that is sometimes likened to an inland hurricane. Recent derechos have caused extreme damage in the U.S., particularly a derecho that caused widespread destruction across Iowa in August 2020. Ten years ago, a derecho charged 600 miles from the Midwest to the nation's capital, leaving a trail of destruction and knocking out power for more than a million. 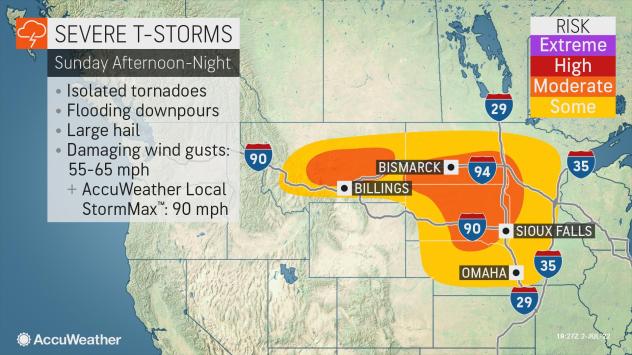 The first complex in the series may take shape over the Dakotas and Minnesota on Sunday night and early Monday. While the exact position, track and timing of this complex may not be determined until thunderstorms associated with it actually form, several highly-populated metro areas across the Midwest could experience a period of unsettled to severe weather conditions on Independence Day, including Minneapolis, Des Moines and Chicago.

This stormy pattern could contribute to even more flight delays at travel hubs across the region during the busy Independence Day weekend. "Unfortunately, we think there will be many more flight delays and cancelations," AccuWeather Chief Meteorologist Jon Porter said of the travel rush at the end of the holiday weekend. 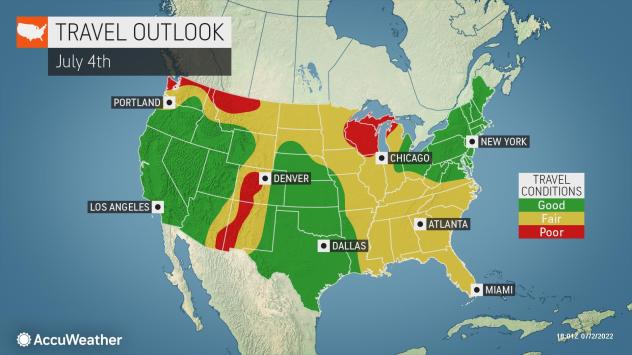 As the pattern evolves, thunderstorms can fire along a 1,000-mile swath from the Dakotas, all the way to Virginia and the Carolinas. The swath is likely to shift northeastward or southwestward from one day to the next, depending on where the edges of the hot and cool air are set up. It is possible that the storms may extend all the way from the central Canada border to the mid-Atlantic or southeastern U.S. coasts during the peak of the pattern.

"Depending on the movement of the individual thunderstorm complexes, heat can be briefly trimmed," Lundberg said. "The pattern may also bring some much-needed rainfall to portions of the corn belt."

Over much of the Heartland, corn stalks were in the growing stage, but ears had not yet formed, according to a United States Department of Agriculture report from June 27. Tall, well-formed stalks that have access to plenty of moisture are more likely to produce a heavy yield of corn, as opposed to stunted growth from drought. 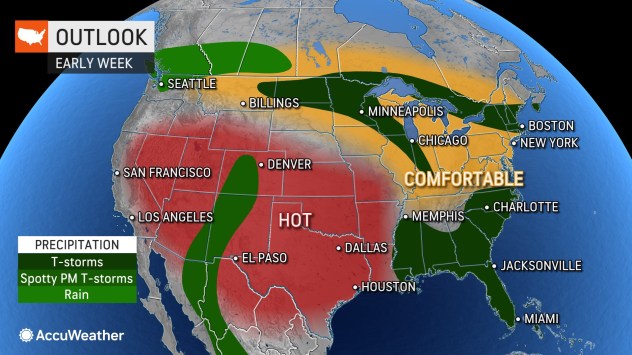 While storms are not likely to roll through the vast extreme and exceptional drought areas of Texas and the southern Plains, some downpours can reach areas that have been subject to building drought in recent weeks. Portions of Illinois, Iowa, Indiana, Wisconsin, Nebraska, Missouri, Kentucky, Minnesota and South Dakota have been experiencing abnormally dry to extreme drought conditions, according to a report issued on June 30 by the United States Drought Monitor.

"Thunderstorm complexes are responsible for about 60% of the rain during the summer months over a large portion of the Midwest," AccuWeather Senior Meteorologist Dale Mohler said. "Corn needs about 1 inch of rain per week to do well."

There is the potential for 1-3 inches of rain to fall next week in the zone from the northern Plains to the southern and central Appalachians. In some cases, much of this rain may fall in one or two rounds. In others, it may be smaller amounts on a daily basis. Just as local communities could be slammed by 3-6 inches of rain with much of that occurring on one or two episodes, other places could still dodge much of the rainfall through the week.

This radar animation example from August 2020 shows what a developing derecho can look like on radar. (Not real-time)

People potentially in the path of the upcoming thunderstorm complexes, as well as individual thunderstorms, will need to monitor the weather for changing conditions on a daily basis. In many cases, the storms may only impact locations for a few hours on a particular day but could affect some communities on a daily basis.

As the thunderstorms erupt, evolve into complexes and begin to move next week, updates on their progress will follow.

A similar jet stream configuration this past spring produced a similar outcome with long-track thunderstorm complexes, including a couple of derechos over the Central states. The pattern is more typical for the summer, rather than the spring season.

Approximately 70% of all derechos occur during the warm months of May, June, July and August, according to the National Weather Service.

However, while thunderstorm complexes are fairly common, their more-intense cousin, derechos, are not. It is possible for years to go by without a derecho.

One creative endeavor is taking the American flag to historic heights