You don’t have to be directly struck by lightning. There are other ways you can get hit, which is why you should never underestimate a thunderstorm.

Heat relief is on the way for the parts of the southern United States to end this weekend. While a drop in temperature and humidity may be welcome by some, it will also come at the price of localized flooding downpours and gusty thunderstorms, AccuWeather meteorologists say.

A front that helped produce cooler and less humid air in the Northeast and mid-Atlantic region earlier this week moved southward along the Atlantic coast on Thursday. That front will turn toward the southwest and west this weekend while pushing very slowly from Georgia to Florida, Alabama and part of Mississippi. 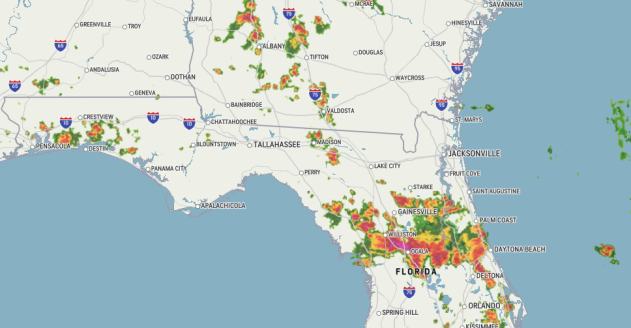 This radar image captured at 3 p.m. EDT Friday, June 24, 2022, shows an eruption of drenching thunderstorms in parts of Florida and southern Gerogia.

In the Southern states, even a slight drop in temperature and humidity from one day to the next can be noticeable when the majority of days are hot and humid. Temperatures in some areas can be slashed 10-15 degrees Fahrenheit from the upper 90s and low 100s to the lower 90s and even the upper 80s this weekend.

Macon, Georgia, located about 80 miles south of Atlanta, soared to 100, 105 and 104 from Tuesday to Thursday respectively, with record highs set on Wednesday and Thursday. Highs are forecast to be in the low to mid 90s on Sunday in Macon, which is more typical of late June.

As slightly cooler air lifts hot and humid air in its path, drenching showers and thunderstorms will continue to erupt, forecasters say.

Some of the downpours will have the potential to lead to flash flooding around urban neighborhoods, according to AccuWeather Senior Meteorologist Brett Anderson.

"A few of the stronger thunderstorms are likely to bring powerful wind gusts that can knock down trees and lead to sporadic power outages in localized areas," Anderson said.

There is the likelihood the front's forward speed will slow and stall in the vicinity of the northeastern Gulf of Mexico due to weakening steering winds.

People spending time outdoors, such as at Florida theme parks in the Orlando area, should be prepared for torrential downpours and frequent lightning strikes with some storms on Sunday. The bulk of the storms will tend to be during the afternoon and evening, but there will likely be some exceptions. 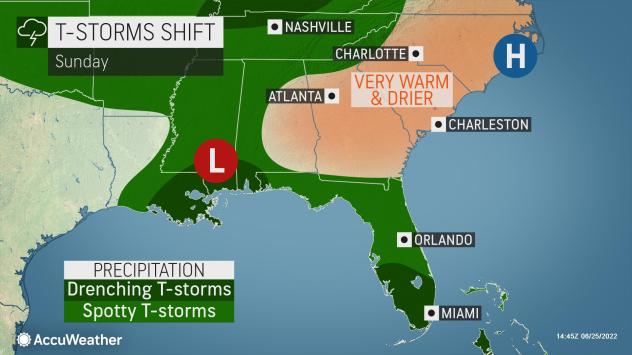 For those planning visits to the beach or a day out on the boat, the atmospheric setup is not the typical summertime scenario where storms occur at the coast in the morning and drift inland during the afternoon. Because of the southwestward movement of the storms, areas along Florida's west coast and beaches over the panhandle could be slammed by afternoon and evening storms that typically would drift inland.

There is a chance that dry air pushes southwestward enough that part of central Florida and the upper west coast beaches of the Sunshine State are free of storms or may only have an isolated downpour.

A few waterspouts could spin up this weekend and can be an added danger for those spending time on the water or along the coasts.

The greatest weather risk to people spending time outdoors this weekend will be from lightning strikes. Conditions can change in a matter of minutes during the late morning hours and into the afternoon, so people should move indoors or seek shelter in a hard-top vehicle at the first rumble of thunder, experts say.

The leading edge of the storms is likely to reach as far west as Jackson, Mississippi; Memphis, Tennessee; and New Orleans. By late Sunday afternoon and into Sunday night, another weather system will converge from the northwest.

Atlanta is likely to be free of thunderstorms on Sunday, but storms on Monday can become locally heavy and gusty. Both days of the weekend should be free of storms around Charlotte, North Carolina, and Houston, but opportunities for downpours will increase early this week. 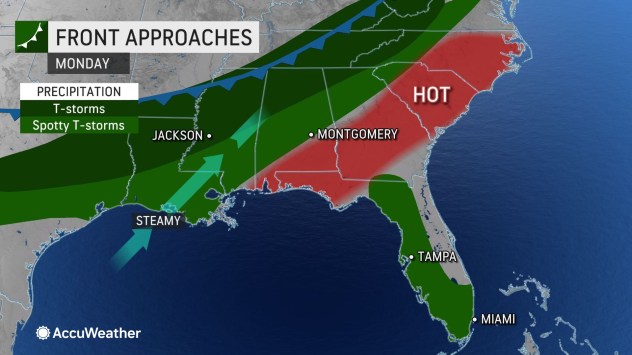 That system, which is a cool front, may not have enough momentum to sweep warm and humid air out of the Southeast this week, but it is likely to cause showers and thunderstorms to develop and eventually spread eastward over much of the region, including areas that dried out over the weekend.