Farmers are surveying the damage to their crops in Iowa, Illinois and Indiana after a powerful line of severe storms blew through the region on Aug. 10.

Money doesn’t grow on trees, but for farmers, what they grow does make them money — unless it's destroyed by a rare derecho.

Almost a month away from the beginning of harvest, corn crops in Iowa were significantly damaged and in many cases destroyed in the wake of a massive derecho that tore a path of destruction across nearly 800 miles of the middle part of the nation last week. Across a large swath of Iowa, corn crops were left leaning over, crimped, snapped off, or even flattened to the ground by the powerful winds.

Growers spend more than half a year preparing, planting, watering, and waiting for harvest, and all of that hard work, time and money was ruined over the course of just 14 hours. 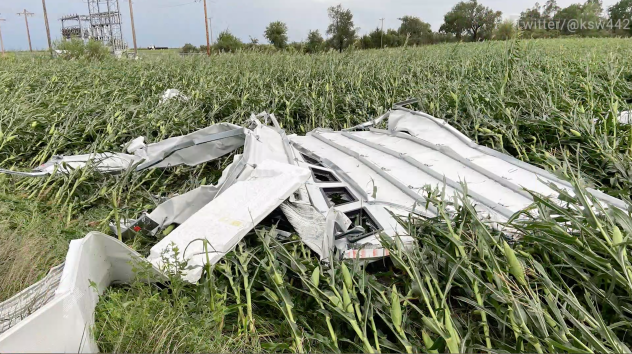 “Getting to Perry, [Iowa] everything was pretty flat, going through town it looked like a war zone,” Cody Halling, a farmer in Perry, Iowa, told AccuWeather National Reporter Bill Wadell.

And the extensive damage will come at a steep price in the U.S.

"AccuWeather estimates that the derecho caused $11.2 billion in damages across the 770-mile swath of the United States that it affected due to extensive losses in crops, including 10 million acres of crops that were destroyed across Iowa, the nation’s top corn-producing state," AccuWeather Founder and CEO Dr. Joel N. Myers said.

"Millions of bushels of stored grain were also damaged or destroyed. Widespread power outages affected more than 1 million customers, including businesses, and more than 60,000 people remained without power in Iowa on Monday. The lengthy power loss not only affected business operations, but added to the overall cost in spoiled food. Tornado damage and losses to personal property were also factored into AccuWeather’s proprietary damage estimate," Myers said.

Approximately 23.4 million acres were seeded with corn and soybeans this spring, according to data from the USDA. By early estimates that would mean some 43% of Iowa’s 2020 corn and soybean crop was damaged or destroyed by the violent storm system, Radio Iowa reported.

“This morning I had a farmer reach out to me to say this was the worst wind damage to crops and farm buildings that he has ever seen across the state in such a wide area,” Iowa Gov. Kim Reynolds told reporters after the destructive storm complex rolled through. 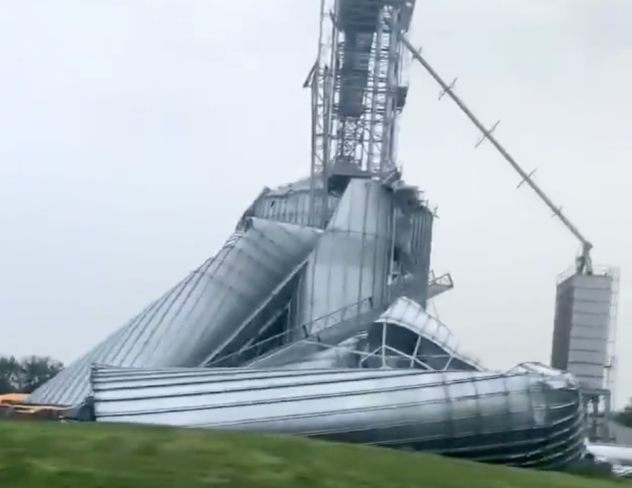 Extensive damage from the hurricane-force winds in Iowa. (Image via Twitter/@MONASTiCNiCK)

According to AccuWeather meteorologists who study how weather impacts crop commodities, the derecho caused enough damage to impact American farmers' overall crop yields for 2020. "AccuWeather believes harvested acreage will be lower, likely closer to 83.5 million acres, due to damage from the derecho on Monday," AccuWeather Senior Meteorologist Dave Samuhel said.

Back in early June, AccuWeather forecasters were calling for total U.S. corn production in 2020 to be 15.708 billion bushels. But Samuhel said forecasters who are tracking commodities now believe total output will be 15.03 billion bushes after factoring in the impact of the derecho.

It's been a tough few years for farmers who have struggled through flooding, reduced exports, trade wars, low prices, and working through a challenging year in the middle of a pandemic.

In the spring of 2019, record flooding overwhelmed the midwestern United States and took a significant toll on farmers.

“It really went through the heart of the corn and bean belt," AccuWeather Senior Commodity Forecaster Dale Mohler said of the derecho. "Illinois and Iowa are the two biggest corn-producing states in the country."

Mohler mentioned this year's summer corn crop was looking better than average — until the derecho hit. 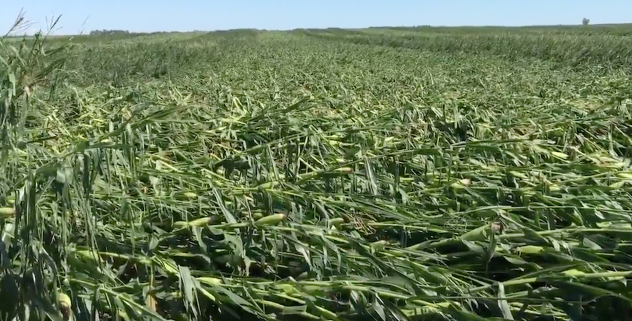 Some farmers are hopeful that some of the damaged corn can recover and stand back up or still be harvested.

“It’ll be lodged, it’ll be difficult to combine, but at least completely flat on the ground,” Halling said.

“For the U.S. as a whole, it's not going to destroy things, but individual farmers that got hit the hardest," Mohler said. "If you were in those 90 or 100 mph plus gusts, it's really hard to recover and I wouldn’t doubt if there are hundreds of acres in places, in certain counties, that are wiped out.”

At the derecho's peak intensity, some of the wind speeds reached Category 2 or 3 hurricane force, and the damage the winds caused was so widespread that it could be seen on satellite afterward.

Satellite images of Iowa on July 28 and Aug. 11. The fields damaged by the derecho on Aug. 10 can be seen north of Des Moines, Iowa. (NASA Worldview)

A peak wind gust of 112 mph was recorded in Midway, Iowa, which would qualify as an EF2 tornado or a Category 3 hurricane.

“Having a hurricane in Iowa was kind of one of those things you wouldn’t think would happen," Halling said, adding," 2020 ... You don’t know what’s coming next.” 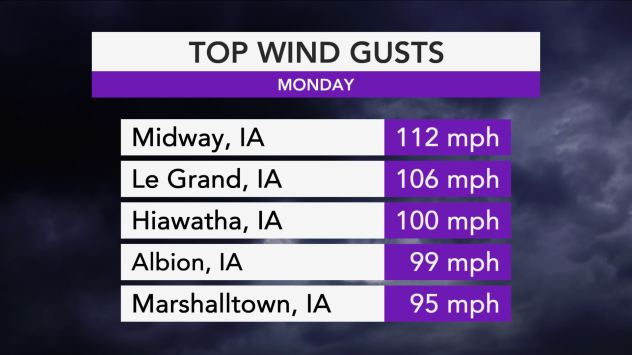 Numerous reports of 70- to 90-mph wind gusts also brought along a wide swath of damage reports across northern Illinois, including the Chicago metro area. The worst of the storms focused on a zone from around Des Moines through Davenport, Iowa.

The cluster of storms, which erupted in South Dakota on Monday, traveled approximately 770 miles in about 14 hours before it weakened in Ohio, according to the National Weather Service's (NWS) Storm Prediction Center (SPC).