The floodwaters washed away homes, roads and bridges and inundated schools. Kentucky’s governor expanded a state of emergency declaration and said the death toll was likely to increase.

Authorities say storms that dumped up to 10 inches of rain led to deadly and damaging flooding in eastern Kentucky.

Heavy rain poured down across eastern Kentucky late Wednesday into Thursday, triggering deadly flash flooding that caused mudslides, washed away homes and roadways and promoted a flash flood emergency. The deluge produced more than 10 inches over a 24-hour period in the hardest-hit areas and came only days after another disastrous flood inundated the St. Louis area.

Kentucky Gov. Andy Beshear told CNN early Friday that the death toll had risen to 15 and that number would likely double. 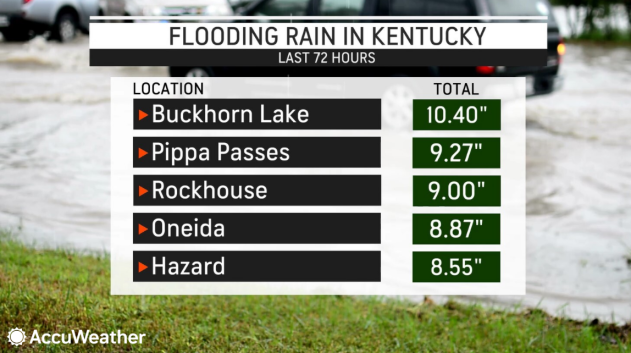 Thursday night Beshear made a direct request to President Joe Biden for federal assistance in response to the flooding.

"The damage suffered is enormous, and recovery will be a long-term effort," he said over Twitter. "This assistance is critical to our efforts and essential for our people."

Beshear described this as “one of the worst and most devastating events in Kentucky’s history,” and an ongoing natural disaster during the press conference.

Damage assessment and restoration are likely to continue for several days, but the dangerous flooding hindered first responders’ ability to rescue residents, as well as allow utility workers to get power restored.

Virginia Gov. Glenn Youngkin declared a state of emergency Thursday evening in response to heavy rainfall and severe flash flooding in southwest Virginia that began Wednesday and a forecast for more rain into Thursday night.

“Southwest Virginia continues to be impacted by flooding after heavy rainfall in the area yesterday,” said Youngkin. “With more rainfall forecasted over the next few days, we want to lean forward in providing as many resources possible to assist those affected. Our team will continue to monitor the situation and provide assistance as needed.”

Storm chaser Brandon Clement captured footage of extensive flooding that seemed to wash away entire properties in the eastern Kentucky town of Hindman, located about 93 miles southeast of Lexington.

"The water is up to their doors. If they get out, it's waist-deep, and they can go up a hill, but I don't know about the current," Barbara Wicker, a Kentucky resident who was stuck in the flash flood, told Clement. "Their phones are probably out. I can't reach them; I can't reach 9-1-1. I can't reach nobody, no troopers. There is no help in sight...it's never been this bad."

Some residents were waiting on rooftops or clinging to trees as they waited to be rescued by Kentucky National Guard members and other emergency crews that were deployed, according to Beshear. The governor said the state had a limited number of aircraft with the necessary equipment to airlift those stranded residents. As a result, Beshear said he contacted West Virginia Gov. Jim Justice, who agreed to send additional aircraft to aid rescue efforts in Kentucky. 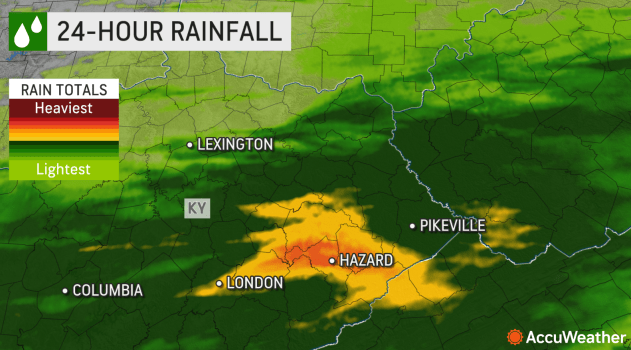 Local roads turned into rivers Thursday morning, making them impassable, and at least four water rescues occurred in Hazard, Kentucky, which is a small town in Perry County, southeast of Frankfort. The rising water levels have washed away several homes and cars across multiple southeastern Kentucky counties.

"We are dealing with a catastrophic and historic flash flooding situation in parts of the region," WYMT News Director and Anchor Steve Hensley said, according to the Lexington Herald-Leader. "I’ve never seen water come off the hill behind my house like this. There are people trapped and homes and roads flooded. A flash flood emergency continues In several counties. I pray nobody has lost their life. I’m afraid the devastation we will see after daybreak will be significant.”

Hensley, 46, tweeted on Thursday morning that he has never seen flooding in Perry County like the area is experiencing, adding that this is a "life-threatening situation."

Although the total number of people missing is unknown, NBC News correspondent Maggie Vespa reported that at least 20 people have been reported missing or unaccounted for in Perry County.

Rescue crews have been unable to reach several areas due to “swift water over roadways,” according to the Breathitt County Emergency Management Facebook page.

On Thursday morning, MEDVAC crews from the Kentucky National Guard were preparing to leave Frankfort to assist in water rescues in eastern Kentucky.

This 24-hour radar loop shows the storms passing through Kentucky from Wednesday into Thursday.

“Due to heavy rainfall and flooding in [eastern] Kentucky, the Kentucky Guard has launched multiple aircraft to provide support for hoist & rescue operations,” wrote Lt. Col. Stephen Martin, AAAF commander in a tweet.

By 2 a.m. EDT on Friday morning, the North Fork Kentucky River at Jackson had reached 43.44 feet, according to the NWS Advanced Hydraulic Prediction Service. This set a new record crest at the site, exceeding the previous record of 43.1 feet, and the flood stage is at 29 feet.

AccuWeather meteorologists began warning early this week that torrential downpours were expected to raise flash flooding concerns across a 1,200-mile-long zone of the United States, including across parts of Kentucky, this week.

Most of the rain started around 10 p.m. on Wednesday and continued to accumulate throughout the overnight hours, according to the Kentucky Mesonet, which has weather-monitoring stations statewide.

Over the past 24 hours, the bulk of the rain has been isolated to southeastern Kentucky. More than 5 inches had fallen in Breathitt, Perry, Owsley, Knott, Clay and Letcher counties, according to the Kentucky Mesonet. 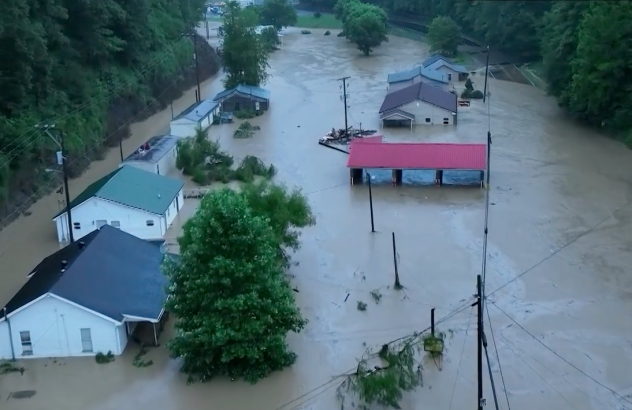 Perry County was among one of the hardest-hit areas with rainfall total radar estimates over 10 inches, according to FOX56 Chief Meteorologist Chris Johnson.

“It’s been wet in eastern Kentucky. One town, Jackson, has had over 13 inches of rain so far this month, for example,” AccuWeather Senior Meteorologist Dan Pydynowski said, adding that when the ground is already wet, especially when combined with the mountainous terrain, “it’s a recipe for some serious flash flooding.”

According to WTVQ, the rain caused officials from the Kentucky Energy and Environment Cabinet to recommend evacuations for buildings in the floodplain of Panbowl Lake in Jackson, due to the risk of dam failure. 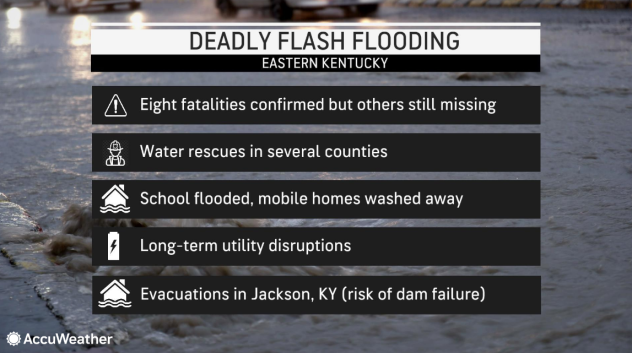 Rescue crews have been unable to reach several areas due to "swift water over roadways," according to the Breathitt County Emergency Management Facebook page.

"They said it was 'catastrophic' and there were too many people to help," Hindman resident Kendra Bentley told Clement.

A flash flood emergency occurred in the early hours of July 28 in eastern parts of Kentucky. Homes in Hindman, Kentucky, were trapped between mudslides, flooding and rockslides.

"I don't have the words to describe the amount of devastation daylight will uncover across eastern Kentucky," WKYT Chief Meteorologist Chris Bailey wrote on Twitter. "This is likely to go down as one of the worst flash flood events to ever hit the state."

The damaging waters have cut power to more than 25,000 customers across eastern Kentucky as of Thursday morning, according to PowerOutage.US.

“To everyone in Eastern Kentucky, we care about you and we love you,” Beshear wrote on Twitter Thursday morning. “We’re going to do our very best to do everything we can to help you.”

Pydynowski said that the wet weather will remain through the end of the week before a brief break from the rain comes on Saturday.

“More storms are possible Sunday, so unfortunately flash flooding will remain a concern through the weekend at least,” Pydynowski said.

Girl, 7, killed when tree crashes onto campsite in national park

Could shark sightings in the Midwest become more common?