The Bush Fire, burning in Arizona’s Tonto National Forest, has forced residents to evacuate as it’s grown to more than 64,000 acres in size.

AccuWeather forecasters warn that warm weather conditions through the week could lead to an expanding wildfire threat as fires in Arizona ravage more than 280,000 acres across the state.

Temperatures forecast to topple 110 degrees Fahrenheit in the lower deserts of southeastern California and Arizona this week are likely to aid wildfire growth and hinder containment efforts. 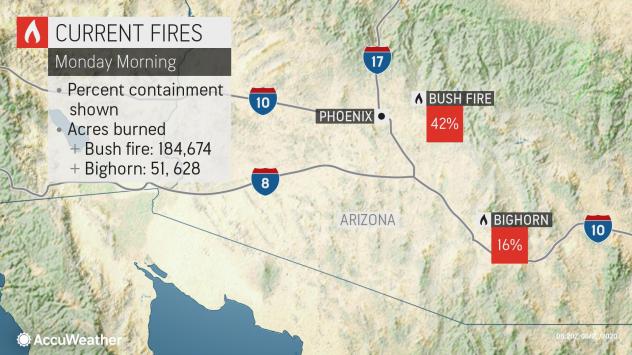 The Bush Fire is the largest current wildfire in the United States and the fifth-largest fire in the history of Arizona. The fire doubled in size from Tuesday to Wednesday and forced thousands to evacuate.

The Bush Fire in southern Arizona morphed from one of many blazes in the region to one of the largest in state history, seemingly overnight.

According to the National Weather Service (NWS) office in Phoenix, the Bush Fire's sudden growth moved up its burnt acreage total to the fifth largest wildfire in state history. 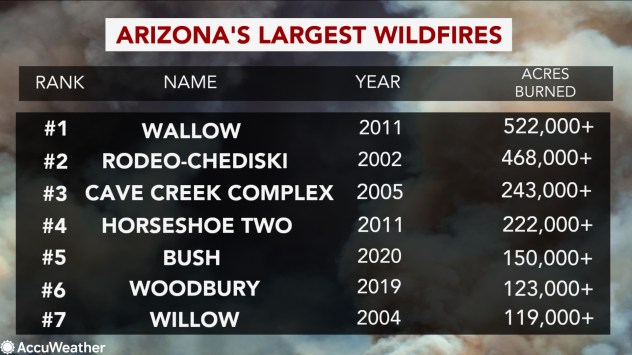 According to Inciweb, the blaze had swelled to more than 184,000 acres and was 42% contained as of early Monday morning.

In the coronavirus era, those evacuation orders come with extra health-related focuses. 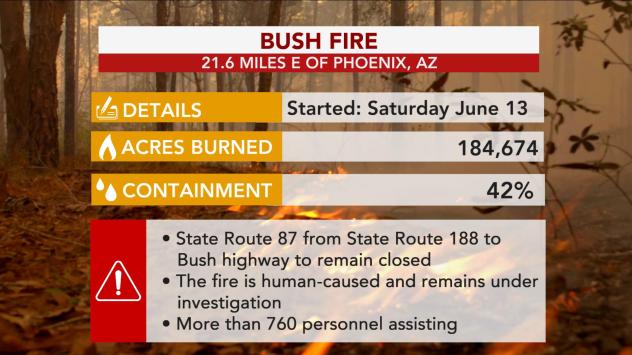 The blaze was initially started by a car fire on Bush Highway, which ignited dry brush and grass. Currently burning to the northeast of Phoenix, the fire has yet to destroy any homes or structures, but photos depicting the blaze's burn scars and fire fronts are frighteningly close to residences.

NOAA's GOES-17 satellite captured dramatic images of the fire burning out of control northeast of Phoenix. The weather satellite is positioned 23,000 miles away from Earth and it recorded footage in which the flames from the blaze were visible and plumes of smoke were seen shooting into the atmosphere. 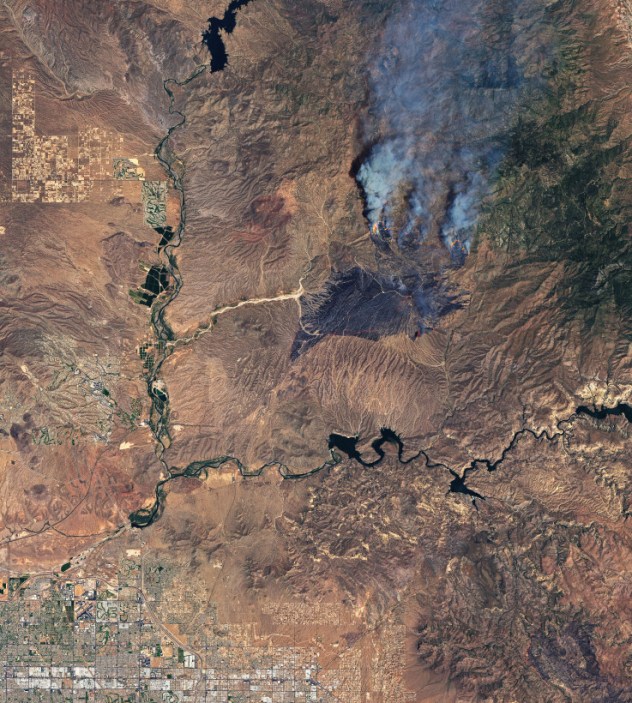 Satellite images capture the wide burn range of the Bush Fire as it continues spreading without containment on Wednesday, June 17. (NASA Earth Observatory)

"Danger in these areas is imminent and life threatening," the fire information page reads. "Residents should evacuate immediately to a shelter or with family/friends outside of the affected area. Residents should avoid close contact with those who are sick and should practice public health recommendations when relocating."

In the southeastern corner of Arizona, firefighters battling the state's previous largest blazes -- the Bighorn Fire, the Blue River Fire and the Sawtooth Fire -- made significant containment progress with all three.

Burning by the Catalina Mountains north of Tucson, the Bighorn Fire alone has burned over 50,000 acres as more than 900 personnel have worked to contain the blaze. As of early Monday morning, 16% of the fire has been contained.

SPEECHLESS: Check out this video that captured smoke from the Bighorn FIre piling into the sky near Summerhaven. https://t.co/5mUgKKjUbY pic.twitter.com/9NZtZLzW0j

“There are so many different communities around different parts of the fire to the south and west. You’ve got Tucson and Oro Valley, those are big municipalities," Hunter said. "Then as the fire goes up the mountain, we’ve got smaller communities, the town of Summerhaven is on top of Mount Lemmon. That’s an area where we're focusing on more recently because the fire has the potential to perhaps spread in that direction."

As weather conditions and other factors, such as difficult terrain, caused a long and grueling fight against the wildfire, which was ignited by a lightning strike on June 5, communities have been turning out to offer support for firefighters.

"The community here has been wonderful in their support of firefighters. Issuing thank you notes and signs and all that stuff and the firefighters are really appreciative and they feel that community support," Hunter told Wadell.

Around 160 miles to the north, by the Grand Canyon, the state's second-largest fire also grew rapidly in the first half of this week. Known as the Mangum Fire, the blaze ignited more than 66,000 acres with 23% containment as of early Monday morning. 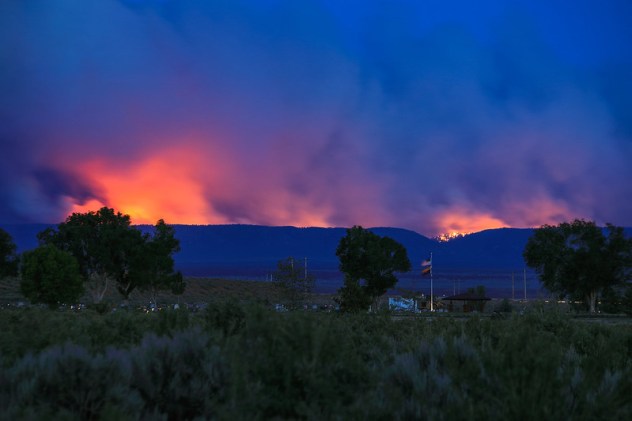 The Mangum Fire as it pushed toward Jacob Lake. Image via Twitter/KaibabNF

According to Inciweb, the fire forced numerous road closures and led the U.S. Forest Service to close the North Kaibab Ranger District. Those road closures rendered the North Rim of the Grand Canyon inaccessible.

#MangumFire "We attacked directly and fell back and attacked again, too many times to count. The fire burned within feet of the Historic Ranger station but through pre-preparation and crews arriving back on scene in the nick of time… saved it."@KaibabNF pic.twitter.com/g6YxIJIEBI