As the month comes to a close, temperatures and humidity levels will increase in the Northeast ahead of some potentially severe weather over the holiday weekend.

Stormy weather may put a damper on activities and throw a wrench into travel for the start of the Independence Day weekend in the northeastern United States, but the good news for those hoping to catch a fireworks show on the holiday itself is that the weather will steadily improve for the bulk of the region as the long weekend progresses.

Concerns for a cold front dropping in and hitting the brakes over the mid-Atlantic are waning due to the stronger nature of the system. However, that stronger system will result in intense showers and thunderstorms during the first part of the weekend for tens of millions of people. 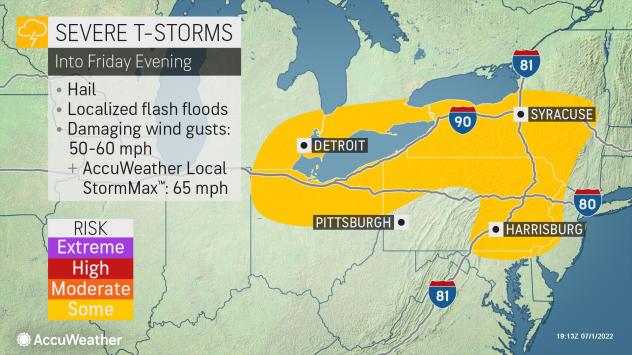 Many people in the Northeast have been enjoying multiple days of sunshine and low humidity with warm afternoons. But, temperatures and humidity levels were on the rise on Friday, ahead of the front from the Upper Midwest that is set to trigger showers and locally severe thunderstorms.

Temperatures reached or exceed 90 F from Boston to New York City and Washington, D.C. Friday afternoon. The higher humidity and intense early July sunshine sent afternoon AccuWeather RealFeel® Temperatures toward 100 degrees. Even in Pittsburgh, RealFeel temperatures climbed into the 90s, despite an increase in cloud cover.

Into Friday night, the risk of heavy, gusty and even locally severe thunderstorms with damaging winds, hail and flooding downpours will extend from parts of Ohio to southeastern Michigan, southern Ontario and portions of Pennsylvania and New York. Motorists and those getting an early start on outdoor activities should be prepared to dodge storms during the afternoon and evening hours in these areas.

Northwest of Philadelphia, hail measuring at least one inch in diameter was reported in Wyomissing and Shellington, Pennsylvania, Friday afternoon.

Later that evening, severe weather in Scranton, Pennsylvania, delayed performers at the Peach Music Festival, though the festival continued once the storms passed.

"While the storms will tend to diminish in intensity during the overnight hours on Friday while pushing through the Appalachians, some can survive the trip to the upper mid-Atlantic and New England coasts on Saturday morning in the form of localized downpours," AccuWeather Senior Meteorologist Dave Dombek said. 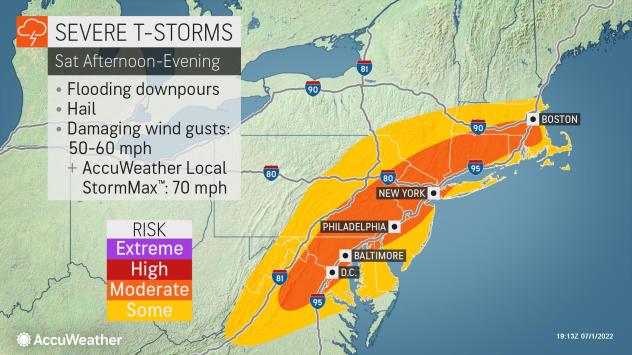 Instead of dry air sweeping through during the afternoon on the coast Saturday, storms are likely to erupt and become severe. This would be due to the actual front hanging back to the northwest and allowing the humid air and heat of the day to produce more storms.

"In places such as New York City, Saturday is likely to bring a morning downpour with perhaps some thunder and lightning, then another round of thunderstorms during the late afternoon and evening hours," Dombek said. With a few exceptions, the day should not be a total washout in many places along the Atlantic Seaboard, and the middle part of the day should be fine for outdoor activities.

The storms that roll through Saturday afternoon and evening are likely to become severe in some communities and bring the risk of flash flooding, locally damaging wind gusts, frequent lightning and even some hail. 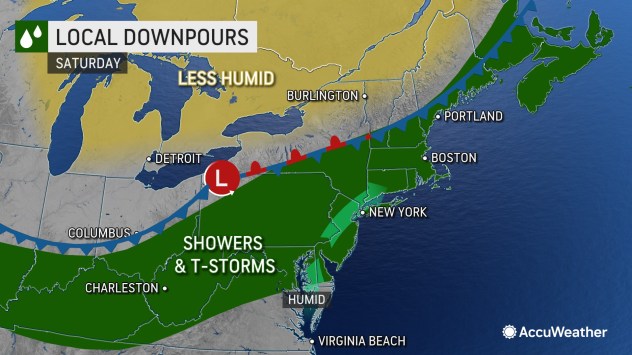 Approximately 50 million people from northern Virginia, Maryland and eastern Pennsylvania to eastern Massachusetts will be at risk for severe weather from Saturday afternoon to Saturday evening. Wind gusts in the strongest storms will frequent 50-60 mph with an AccuWeather Local StormMax™ gust of 70 mph possible. With this force, localized power outages can occur along with some tree damage, experts say.

"Following strong to severe storms on Saturday, the front will sag southeastward enough to bring some drier air into New England and much of the Northeast from Sunday to Independence Day," AccuWeather Meteorologist Dean DeVore said. 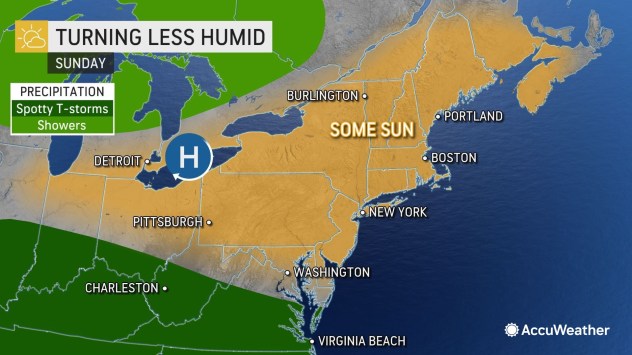 "There are still some questions about how far south that drier air pushes later this weekend, but for now, New York City, Boston, Philadelphia and Pittsburgh look great for their Fourth of July fireworks and celebrations," DeVore added.

Major fireworks shows are expected throughout the Northeast this year following several years of COVID-related cancellations or significantly scaled-back celebrations.

Temperatures in Washington, D.C., may still flirt with 90 F on Monday afternoon, which is right around average for July 4. It is from about the nation's capital on south where there may still be pop-up thunderstorms on Monday afternoon. However, the chance of spotty storms is somewhat lower than the outlook from a few days earlier. 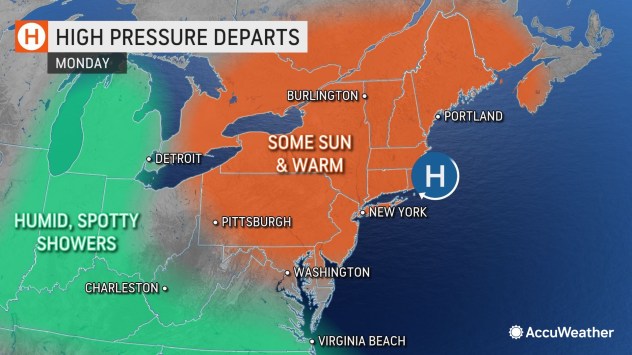 Unlike a number of fronts over the past couple of months that have swept through and brought an unseasonable chill, relative to the time of year in the Northeast, the air coming in will bring lower humidity levels, but only a slight drop in temperature. Widespread highs in the 80s are in store for the Northeast on Sunday and the Fourth of July, forecasters say.

Some cooler air will be felt at night with the lowest temperatures of the entire weekend for most locations forecast around sunrise on July 4. Temperatures during that time will range from the mid-40s in northern New York and northern New England to the low 70s around Washington, D.C.

Those heading to the beaches should be able to spend some time in the water. Surf temperatures have slowly climbed since the chilly levels around Memorial Day and are within a few degrees of 70 from southern New England to the Delmarva Peninsula and are well into the 70s around the Virginia capes. 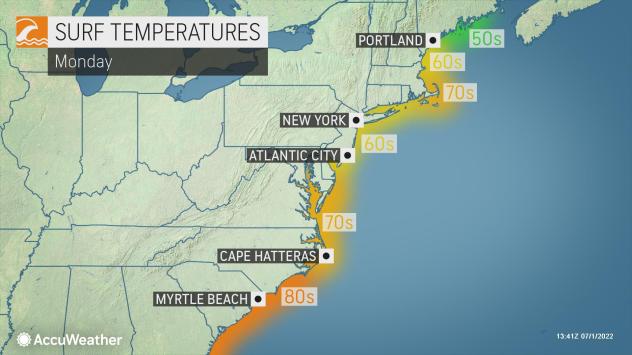 Aside from some pesky shower and thunderstorm activity on Saturday and Saturday evenings, 90% of the time from Friday through Monday should be free of rain at places like Jones Beach, New York; Wildwood, New Jersey; Rehobeth Beach, Delaware; and Ocean City, Maryland.

Around Virginia Beach, Virginia, the most likely time for a thunderstorm will be from Sunday afternoon to Monday, but even much of that time will be free of rain.