In what Kentucky's governor called an "emergency situation," National Guards from three different states have made hundreds of rescues of those still trapped by the floodwaters.

Residents say the water began rising so fast overnight Wednesday that just minutes made the difference between getting to safety and and getting trapped in floodwaters.

Rescues continue to be made across eastern Kentucky Monday, four days after a historic flooding event devastated towns across the region and left at least 30 dead. More than 300 people who were displaced by the flooding were being temporarily housed at state parks, according to Kentucky Gov. Andy Beshear.

In a press conference update Saturday afternoon, Beshear said that the weekend goal in the ongoing "emergency situation" is to get as many Kentucky residents to safety as possible, and that the state is still in an "active search and rescue operation." The rebuild phase, he said, will not be in place for several days, if not several weeks.

"We are so grateful to all of those responders," Beshear said.

Of the hundreds of residents taking refuge at state parks, 142 of those are staying at Jenny Wiley State Resort Park in Prestonburg, with expanded capacity at the park expected to come later in the weekend.

Beshear also stated earlier Saturday that the search for potential victims of the flooding would take weeks to complete, a warning that the death toll could rise further.

"This is one of the most devastating, deadly floods that we have seen in our history," Beshear told NBC on Sunday. "With the level of water, we're going to be finding bodies for weeks, many of them swept hundreds of yards, maybe a quarter-mile-plus from where they were lost."

To aid in the disaster response, the Team Eastern Kentucky Flood Relief Fund set up by the state has raised over $684,000 as of Saturday afternoon, with over 5,600 donations. The first expenditure of the funds raised will go to families who are experiencing funeral costs for lost loved ones.

"It's the least we can do, to be there with these folks in an incredibly difficult time," Beshear said. "We care about you, and we can't imagine the grief you're going through right now."

In an interview with CNN Friday morning, Beshear said, “This is so deadly, and it hit so hard, and it hit in the middle of the night.” He told Brianna Keilar on CNN’s “New Day” that although eastern Kentucky often floods, “we’ve never seen something like this.”

Near the Kentucky and Virginia border, resident Chole Adams was forced to flee her home as the water started to rise, according to a Facebook post by her father, Terry Adams. Adams put her dog in a container that would float and then swam to a neighboring rooftop where she waited with her dog for hours until she was rescued.

The extreme flooding in the eastern part of the state comes less than a year after parts of western Kentucky were slammed by a historic tornado outbreak that ravaged multiple cities this past December.

As of Saturday morning, power outages also remained a concern, with over 11,000 customers without power throughout the state.

The subject of water outages was also brought up by Beshear during his Saturday update, stating that 18 tractor-trailer truckloads of water was en route to Kentucky via FEMA. Water remains unavailable in a number of counties, prompting the FEMA response, with Beshear noting that the arrival of hotter conditions this week adds to the importance of replenishing water resources.

"A lot of people are going to lose their homes, or they are not going to be habitable for some time," Beshear said in a press conference.

Damage assessment and restoration will likely continue for several days as the AccuWeather forecast calls for more rain.

Storm chaser Brandon Clement captured footage as the sun rose on Thursday of the extensive flooding that seemed to wash away entire properties in the eastern Kentucky town of Hindman, located about 93 miles southeast of Lexington. 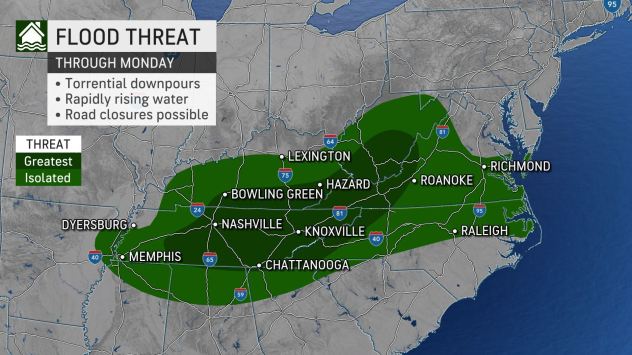 Some residents were waiting on rooftops or clinging to trees as they waited to be rescued by Kentucky National Guard members and other emergency crews that were deployed, according to Beshear. The governor said the state had a limited number of aircraft with the necessary equipment to airlift those stranded residents. As a result, Tennessee and West Virginia National Guards sent extra aircraft to assist in rescues.

Pat Bradley, a Hindman resident, told AccuWeather National Reporter Kim Leoffler that as she stepped out of her home Wednesday, the water had already risen to her knees. Bradley's son rushed to get her out of her home that night, and Bradley added the water rose so quickly that they might not have been able to drive out if they had waited any longer.

"We are dealing with a catastrophic and historic flash flooding situation in parts of the region," WYMT News Director and Anchor Steve Hensley said, according to the Lexington Herald-Leader. "I’ve never seen water come off the hill behind my house like this. There are people trapped and homes and roads flooded."

Most of the rain started around 10 p.m. on Wednesday and continued to accumulate overnight Thursday, according to the Kentucky Mesonet, which has weather-monitoring stations statewide.

In recent days, the bulk of the rain has been isolated to southeastern Kentucky. More than 8 inches has fallen in Breathitt, Perry, Owsley, Knott, Clay and Letcher counties.

"This is by far the worst flooding disaster at least of my lifetime," Beshear told Lester Holt Thursday evening on NBC Nightly News.

School under water as flash floods sweep through Kentucky

A school in Buckhorn, Kentucky, was seen surrounded by floodwaters on July 28, as flash flooding raged through parts of eastern Kentucky.

The North Fork Kentucky River at Jackson, Kentucky, broke its record height of 43.10 feet, which was set in 1939 when it rose to 43.47 feet Thursday night, according to the United States Geological Survey (USGS).

"This is not the time of year that river would normally flood," AccuWeather Senior Weather Editor Jesse Ferrell said. "Of the top 30 record heights at this location, none were between June and December, and most were from January to March."

This abnormally flooded river only worsened the flooding concerns across eastern Kentucky into Friday morning.

Another body of water that reached near disastrous levels was Panbowl Lake in Jackson, with Beshear noting Saturday that the water level went down 10 feet, narrowly avoiding a breach. Leaks at the lake are now "almost zero," Beshear said, adding that "a hazardous and dangerous situation no longer exists."

Why this major city often looks like a 'ghost town'
You've heard these weird weather phrases, but what are their origins?
Could shark sightings in the Midwest become more common?