What to do when returning home after a hurricane

Families are returning home after the devastation that Hurricane Ian wrought to assess damage and begin cleanup. Ongoing flooding and a lack of power are just two of the added challenges that people will need to contend with in the coming weeks.

A week after southwestern Florida was pummeled by Hurricane Ian, the people who had decided to or had to be evacuated by authorities from numerous towns and cities are now coming back to face the conditions of their homes.

Physical damages, flooding and no electricity are just a few of the issues they will be dealing with in the upcoming weeks. Jay Lawrence, spokesperson for the American Red Cross, told AccuWeather Senior Television Broadcast Meteorologist Adam Del Rosso Monday the first step when going back home is to not enter the home just yet.

"You might think you just, you go home, house looks good, 'OK, let’s get in and start cleaning up,'" Lawrence said. "But you really got to take a look around first. You got to make sure there aren't any foundation cracks, or that there is any damage that might harm the structural integrity of the home.”

Lawrence also advised to keep an eye out for damaged power lines, gas lines, the smell of gas or hissing sounds and to not hesitate to contact the authorities. Along with those initial precautions, AccuWeather has gathered information on what actions to begin with when navigating the return home after a hurricane. 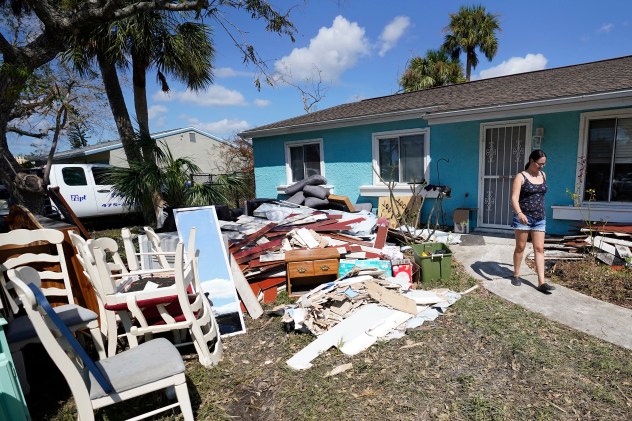 Christina Barrett walks among the water-damaged furniture outside her home Tuesday, Oct. 4, 2022, in North Port, Fla. Residents along Florida's west coast are continuing to clean up after Hurricane Ian made landfall last week. (AP Photo/Chris O'Meara)

As many start contacting their home insurance companies to report damages and get started on claims, they should be aware of the potential scams that are likely to arise during these peak call times. Both contractor and insurance scammers often take advantage of the high need for quick responses to put their strategies to use.

Brower said the companies should be able to discuss the process and the different options for the homeowner to do research and make informed decisions.

Yet offers promoted by official government organizations can be trusted. The U.S. Army Corps of Engineers Headquarters activated the Blue Roof operation in Florida as a response to the impacts of Hurricane Ian in Lee and Charlotte counties, according to a tweet by FEMA on Tuesday.

Florida: @USACEHQ has activated Operation #BlueRoof in Lee and Charlotte County for people impacted by Hurricane #Ian. This service is free for homeowners. The sign up period is available until October 23rd.

Watch out for mold after flooding in your home

Among the many concerns with flooding is the potential for mold. The Centers for Disease Control and Prevention warns families to wait before re-entering their homes after a flood to ensure it doesn’t have any structural or electrical hazards. Then, removing the water and the water-damaged items are the most important steps to prevent mold damage.

However, if the home has not been able to dry out within 24 to 48 hours, the CDC website on mold cleanup says “you should assume you have mold growth.”

Lawrence told AccuWeather that mold will most likely not be visible, so it is safer to assume there is mold growth after flooding.

The real hazard with mold, beyond devastating damage to a home, is its health impact. Lawrence said people with respiratory issues or asthma are already more susceptible to this.

“Exposure to mold can lead to asthma attacks, eye and skin irritation, and allergic reactions. It can lead to severe infections in people with weakened immune systems. Avoid contaminated buildings and contaminated water as much as you can,” according to the CDC.

Take precautions while cleaning up

Similar precautions to avoid the potentially contaminated waters should be taken when cleaning up debris outside of the home. The Florida Division of Emergency Management has tweeted reminders on safety tips for those who are still cleaning up the affected areas.

As you continue clean-up efforts from #HurricaneIan, here are some helpful tips to keep you safe during the process:

⚡️ Never touch a downed power-line
🏡 Keep generators at least 20 ft away from your home & on a flat, dry surface
🦺 Be sure to wear the appropriate safety gear pic.twitter.com/9kke7upk6C

And even after the flooding is gone, people need to ensure they are ready to go back before they do so. Lawrence told AccuWeather people preparing to go back home should have cash and supplies such as flashlights, batteries, bottled water and nonperishable food.

The Red Cross has emergency vehicles in areas in Fort Myers, Florida, delivering shovels, tarps, work gloves, bleach and any other additional supplies to help people put their lives back together, Lawrence said.

To combat the lack of electricity, people tend to rely on power generators, but generator safety shouldn’t be overlooked. After Hurricane Ian, there have already been several fatalities reported due to carbon monoxide poisoning in Lee County, Florida.

The National Weather Service reminded folks last week about generator safety tips, which is especially important in the aftermath of Ian as more than 400,000 still remain without power in Florida.

Generators can be a huge advantage after a hurricane makes landfall but could cause serious harm if used improperly due to potential risks for fire, electrocution and carbon monoxide poisoning, which is said to send more than 20,000 people to the emergency room every year, according to the National Institute of Standards and Technology.

🏡 NEVER use generators in your garage, basement, shed, or indoors. Use outside & away from windows, doors, vents, other openings.

🔌 Never plug a generator directly into a wall outlet.

The NWS urged generator users to only use them outside, positioned away from windows, doors, vents and other openings as well as to never plug a generator directly into a wall outlet. AccuWeather recommends keeping generators at least 30 feet away from homes and any openings, storing gasoline containers away from generators and from any other object that emits heat or flames. Yet not being able to smell exhaust fumes might not be enough to prevent exposure, according to The American Red Cross.

Be aware of carbon monoxide poisoning symptoms that could include dizziness, unconsciousness, nausea and vomiting. “If you start to feel sick, dizzy or weak while using a generator, get to fresh air RIGHT AWAY - DO NOT DELAY,” the Red Cross said on its website.

When electrical grids are down, service towers are likely to have been impacted as well. As repairs continue to restore cellular service, providers have recommended rebooting cell phones each morning, according to a tweet from the Florida Division of Emergency Management Monday. This is supposed to help the phones connect to the closest appropriate tower and improve communication for the affected families.