Tropical Storm Victor could strengthen into a hurricane

AccuWeather forecasters say there is a window for the tropical storm to become a hurricane briefly over the open Atlantic, but it is not expected to be a threat to land. 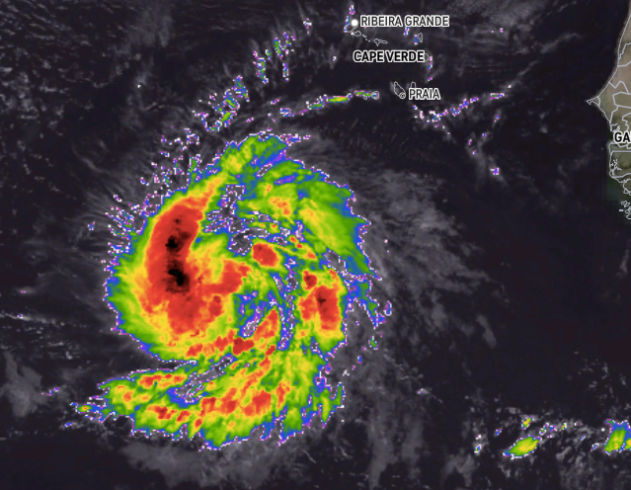 In this image taken Thursday, Sept. 30, 2021, Tropical Storm Victor was seen in the eastern Atlantic. (NOAA/CIRA)

Tropical Storm Victor, the 20th named storm of the 2021 Atlantic hurricane season, continued to slowly strengthen on Friday while it churned over the open waters of the eastern Atlantic. AccuWeather forecasters say it’s not out of the question that it could briefly strengthen into a hurricane, which would make it the eighth hurricane of the year.

Conditions will be favorable for some additional strengthening on Saturday, according to AccuWeather Senior Meteorologist Randy Adkins. As of 11 a.m. EDT Friday, maximum sustained winds in Victor had crept up to 65 mph or 9 mph shy of hurricane intensity, but by Saturday morning, sustained winds were back to 50 mph. The storm was located 850 miles west-southwest of the Cabo Verde Islands and was moving west-northwest at 13 mph.

"A brief window will exist for the storm to then strengthen into a hurricane, but increasing wind shear and drier air will likely reverse this trend with a gradual loss of wind intensity likely to occur this weekend into next week," Adkins said. "As it currently stands, this storm seems much less likely to survive to waters near the Azores," Adkins said, referring to the island chain in the Atlantic about 950 miles west of Portugal.

"Victor is forecast to lose tropical characteristics and essentially be ripped apart by Wednesday evening, if not sooner, well to the southwest of the Azores,” Adkins said. Because of that, no impacts to land are expected at this time.

Forecasters expect south to southwest steering breezes to develop over the central Atlantic in the vicinity of Tropical Storm Victor. These breezes will curve the system northward over the east-central part of the basin and well away from the Caribbean Islands, Bermuda and North America from this weekend into next week. 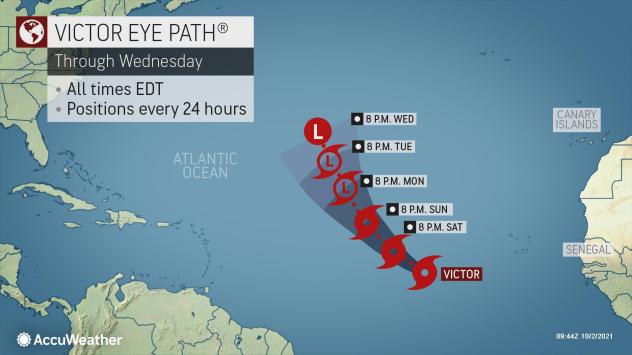 Victor, which claimed the second to last name on the designated list for the 2021 season, is one of two areas of disturbed weather that forecasters have been monitoring over the eastern Atlantic.

A few hundred miles farther to the west of the tropical storm and several hundred miles to the southwest of the Cabo Verde Islands, another area of disturbed weather, also known as a tropical wave, appeared to be poorly organized as of Wednesday and had all but fallen apart on Thursday. The delay in the organization is highly likely to prevent this more western tropical wave from evolving into a tropical depression and storm.

The lack of development thus far is significant for the Leeward and Windward islands as this more western feature was more likely to reach the islands during the early or middle part of next week. The delay in development may allow increasing wind shear near the Leewards and Windwards to totally prevent the storm's formation.

"A broad area of wind shear is forecast to ramp up this week and persist in the wake of Hurricane Sam," AccuWeather Chief On-Air Meteorologist Bernie Rayno said. In this case, stiff breezes will develop and expand from the west and southwest at mid-levels of the atmosphere. 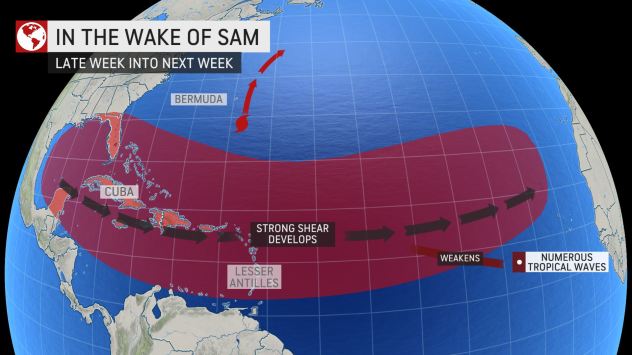 "This belt of wind shear will extend from the Gulf of Mexico and the Caribbean to the central Atlantic and is likely to be at its peak this weekend," Rayno added. Any tropical feature that tries to form or move into the belt of zone of wind shear is likely to struggle.

Elsewhere in the Atlantic, in addition to Sam, what was once Peter seems to have missed its chance to redevelop. A slight swirl of clouds southwest of Peter will be monitored for organization, but wind shear may prevent any strong evolution of that disturbance.

The area from the Caribbean to the Atlantic shores of the United States may be a source of trouble over the next week.

There is some early indication that one or more areas of low pressure may develop from the Caribbean to the Bahamas and perhaps as far to the north as the Carolina coast next week. There is the potential for a tropical system to evolve in this broad area of low pressure, and the region will need to be watched. Lingering or shifting wind shear may act as a deterrent against rapid development.

The zone from just off the Florida Atlantic coast to the Bahamas and the central Caribbean may be the most likely spot for a tropical system to organize, but heavy rain, gusty winds and coastal flooding from a non-tropical storm along the mid-Atlantic coast may occur well in advance of any feature from the Caribbean. 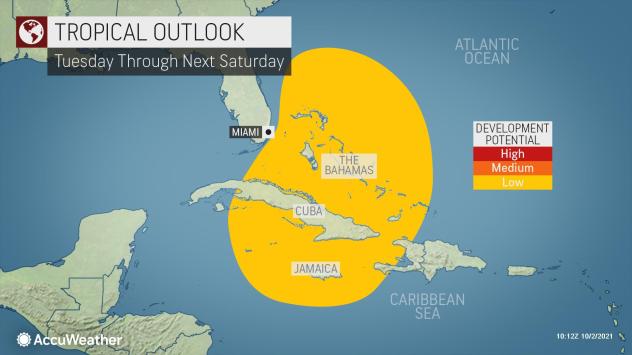 "An anticipated southward dip in the jet stream over the eastern U.S. may pick up any low pressure in the southwestern part of the Atlantic basin and guide it northward next week, and there is some chance that the low center could take on some tropical characteristics," Adkins said. However, if the jet stream does not pick up this low center, assuming it develops in the first place, then conditions may become more favorable for tropical development by the following weekend.

Regardless of tropical development in the southwestern part of the Atlantic basin, a broad zone of unsettled weather conditions may evolve with areas of clouds, rain and thunderstorms from the Caribbean to the Bahamas and eastern part of the U.S. and coastal waters. 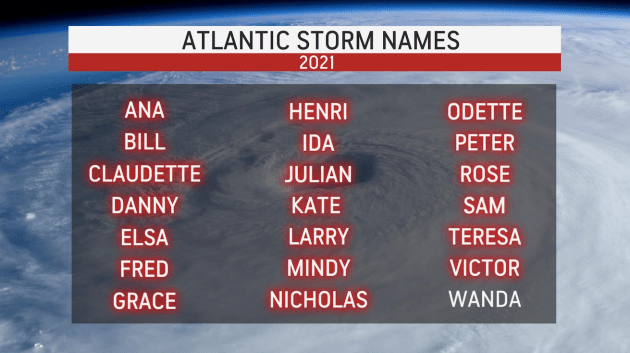 With Victor having formed in the southeastern Atlantic this week, that leaves Wanda as the only name left on the pre-selected list for 2021. The Atlantic hurricane season doesn't conclude until Nov. 30.

Once Wanda forms, forecasters will utilize a supplemental list prepared by the World Meteorologist Organization to name systems. The list will replace the Greek alphabet, which was used to name storms amid two hyperactive seasons in the past: 2020 and 2005.